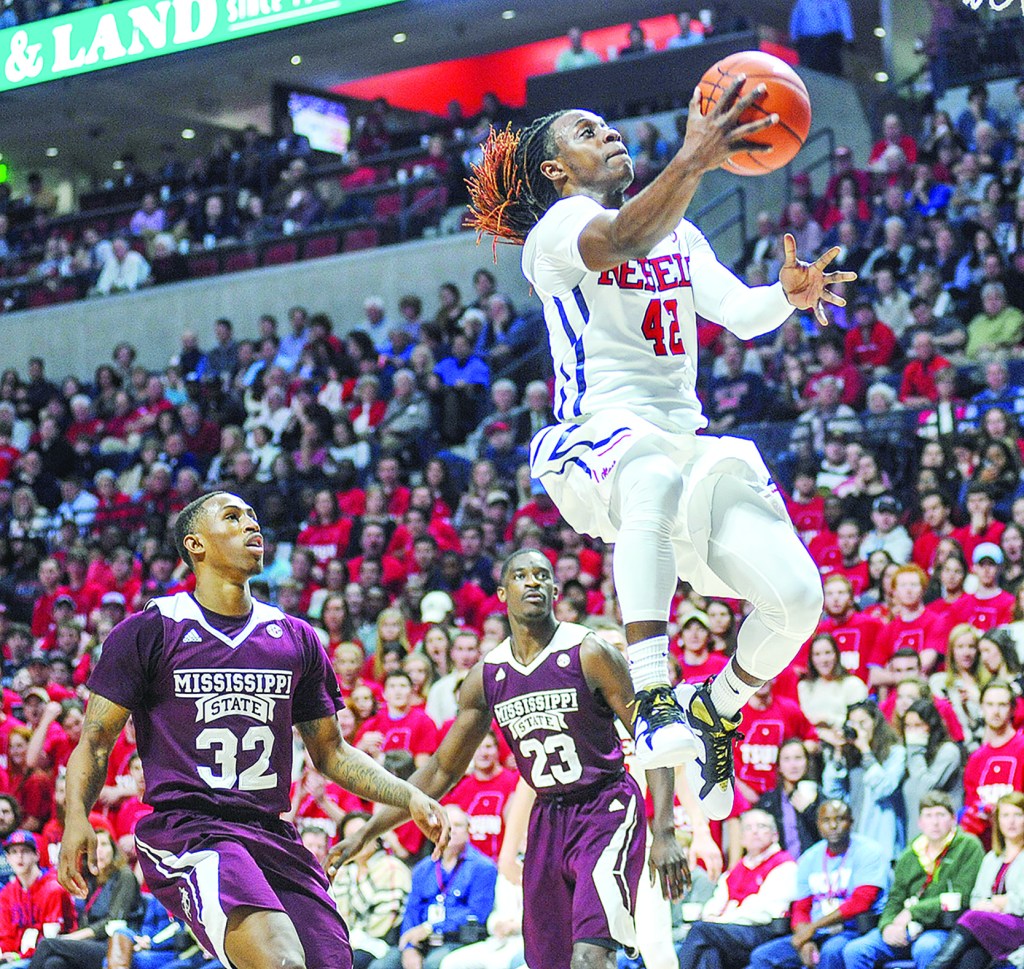 Ole Miss guard Stefan Moody (42) scores against Mississippi State’s Craig Sword (32) during Wednesday’s game at the Pavilion at Ole Miss. Moody poured in a career-high 43 points to lead the Rebels to an 86-78 win.

Stefan Moody got on another one of his rolls Wednesday night. It ended up being the most prolific one of his brief Ole Miss career.

Moody celebrated Senior Night with a career-high 43 points in his final home game, helping Ole Miss down Mississippi State 86-78 at the Pavilion. It’s the most points for an Ole Miss player since Gerald Glass had 53 against LSU in 1989 and ties LSU’s Ben Simmons for the most points by a Southeastern Conference player this season.

“It’s real special,” said Moody, who’s in his second and final season with the Rebels after transferring in from junior college. “It’s probably something I’ll remember the rest of my life.”

Moody, who didn’t play in the teams’ first meeting — an 83-77 win for MSU in Starkville on Jan. 23 — while nursing a strained hamstring, finished 11 of 24 from the floor and 6 of 12 from 3-point range to help the Rebels (19-11, 9-8 SEC) cool off a Mississippi State team that won three of its last four games coming in. He bested his previous career high by 10 points.

“He’s just explosive,” Ole Miss coach Andy Kennedy said. “He jumps off the page at you. He’s the ultimate playmaker. We’ve had to depend on him a lot this year, and he’s responded more times than not.”

Sebastian Saiz and Anthony Perez each added 10 points, but the game was a scoring duel between Moody and MSU forward Gavin Ware, who was a force inside to lead the Bulldogs (13-16, 6-11) with 28 points on 11 of 14 shooting. But Ole Miss limited the Bulldogs to 30.8 percent (8 of 26) from 3-point range after MSU shot 50 percent from deep in the teams’ first meeting.

Ole Miss led by as many as 15, but MSU got within 55-49 on a 3 from Travis Daniels with 14:43 remaining. But the Bulldogs didn’t get any closer after the Rebels answered with a 7-0 run capped by a 3 from Moody to push the lead back to double figures.

Moody started holding onto the ball after committing five turnovers in the first 10 minutes and continued to make shots. The SEC’s leading scorer scored 14 of the Rebels’ first 19 points, had 24 with 5:32 still left in the first half and started a 14-3 run with three free throws with 7:26 left in the half that put Ole Miss up 42-27, scoring eight points during the spurt.

“I kind of just play,” Moody said. “I figure it out when I figure it out. It’s not something I really think about. I just get it up when I can.”

Said MSU coach Ben Howland, “He was incredible tonight. Give that guy all the credit in the world. He is a great player, and he’s obviously cemented himself in my first-team All-SEC voting.”

MSU held Moody scoreless the final five minutes of the half to cut the deficit to 44-32 at the break, but Ole Miss kept its distance with Moody’s contributions and its mix of defenses. The Rebels turned 18 turnovers into 17 points and finished plus-4 on the glass.

“The half-court trap was effective, and then in the second half, they did a better job of making some adjustments in their personnel to the one trap, so we changed our front and went to a 1-3-1,” Kennedy said. “That was really effective for us down the stretch.”