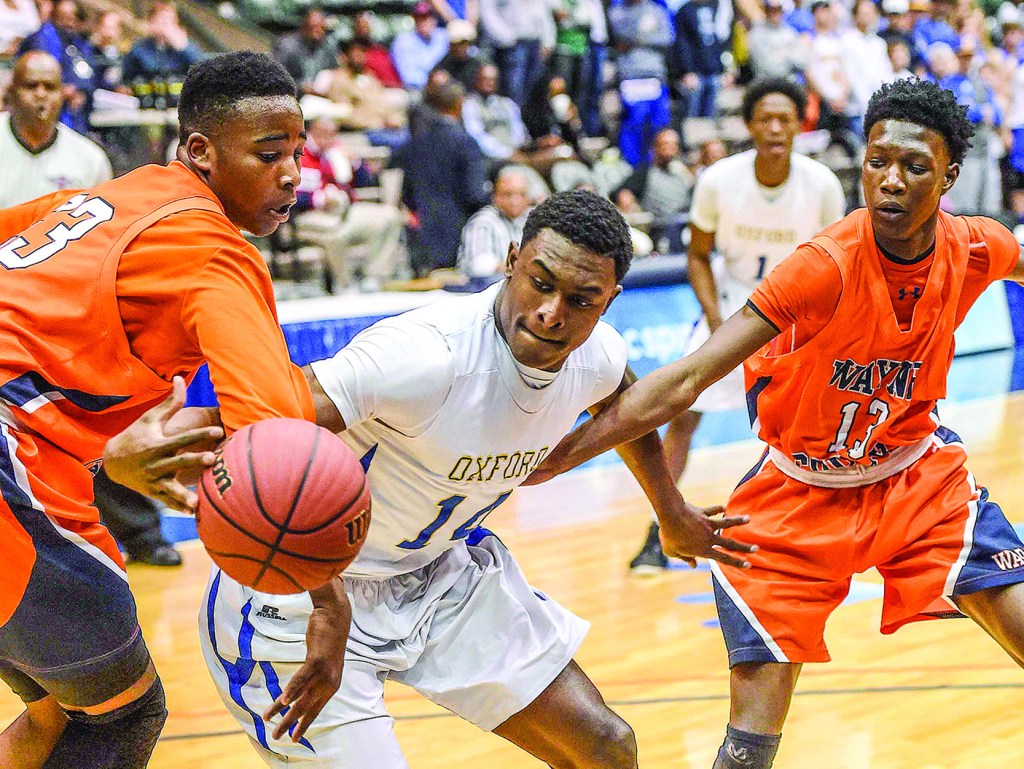 Oxford’s defense kept things interesting, but the Chargers were once again suffocated by Wayne County’s quickness and athleticism on the other end in a 46-43 loss in the MHSAA Class 5A quarterfinals Friday at the Mississippi Coliseum, ending their season against the War Eagles in the same round for the second straight season.

“We just wanted to win this one,” Oxford guard Jarkel Joiner said afterward. “Losing to the same team two years in a row makes it harder.”

Oxford (20-10) trailed by as many as 10 in the second half but made a push down the stretch. Terry Williams’ 3-pointer followed by a putback by D.K. Metcalf and a steal and layup from Joiner drew the Chargers even at 40 with 1:09 remaining.

Oxford had a chance to grab its first lead after another stop, but Williams was stripped near midcourt by Xavier Chambers, who went the other way to put the War Eagles (21-9) back in front. Joiner hit a 3 with 4 seconds left to get Oxford within one, but Quentin Pough hit two free throws before Wayne County stole Oxford’s final inbound pass to end the Chargers’ second-lowest point output of the season.

“Terry Williams saw Joiner and just could not get it out of his hands fast enough,” Oxford coach Drew Tyler said. “When you’re at half-court and they deflect the ball and get a steal, they’re two dribbles away from a score. … When you dig out of a hole and chip away at a lead like that, it’s going to come down to a handful of plays to produce the winner.”

It was a struggle against Wayne County’s equally-as-fast guards and active zone defense for Joiner, who came in averaging 27 points a game but finished with just 14. All of his points came in the second half with half of them coming from the free-throw line.

He was just 3 of 20 from the field as Oxford shot 30.4 percent (14 of 46) for the game and just 20 percent (3 of 15) from 3-point range. Williams added 13 points while Metcalf finished with nine points and 10 rebounds for the Chargers, who averaged just 49.5 points against Wayne County in the last two matchups.

“They were bringing a lot of bodies in the help-side position,” Tyler said. “Not so much double-teaming him, but they were showing help and cutting down on the driving lanes and made Jarkel have to be more patient with his dribble and actually led to him giving the ball up. When the opponent makes Jarkel Joiner give the ball up, that’s increasing their chances of winning.”

Said Joiner, “I was just missing shots. I wasn’t attacking the basket until the second half when it was too late pretty much.”

Wayne County wasn’t much better, shooting 34 percent (17 of 50) from the floor and just 23.5 percent (4 of 17) from deep. Pough was the only Wayne County player in double figures with a game-high 16 points.

Wayne County scored the game’s first seven points and continued to make getting clean looks difficult for Oxford, which had just one field goal through a quarter and trailed by as many as 12 in the first half.

Oxford’s defense matched its counterpart to keep the deficit from growing as no player had more than eight points at halftime. A steal by Joiner and ensuing dunk by Metcalf got the Chargers within six before Pough answered with a deep 3 as time expired on the half to send the War Eagles to the locker room with a 22-13 lead before a back-and-forth second half went the War Eagles’ way again.

“We would make a run then they would make a run,” Wayne County coach Kendrick Davis said. “When you are down to the last eight teams in 5A basketball, everyone is going to be good. I’m just glad that we were able to make the plays when we had to, and I’m glad that this one is over.”