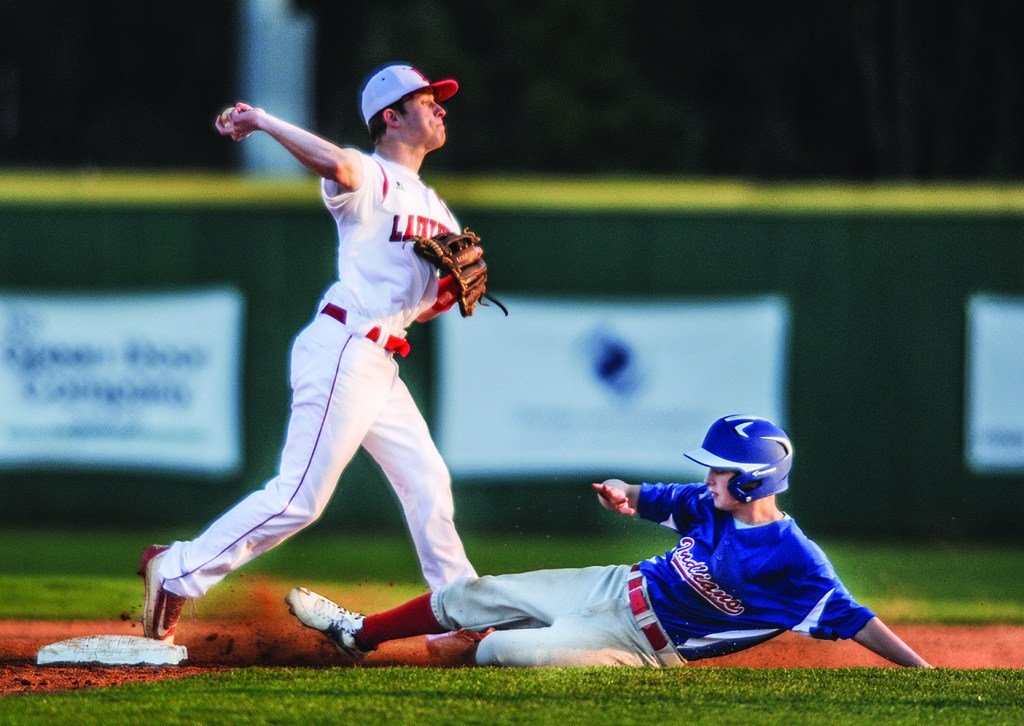 Lafayette shortstop Will Cullen forces out Byhalia’s Braxton Grisham and throws to first for a double play on Friday in a Region 2-4A game at W.V. Brewer Field. The Commodores swept Byhalia in a doubleheader with a pair of 13-1 wins.

The Lafayette baseball team started Region 2-4A play with a doubleheader against Byhalia Friday night, both ending in victory for the home team at W.V. Brewer Field.

Lafayette (4-2, 2-0 Region 2-4A) faced a Byhalia team that would be in for a surprisingly short night as both games ended in 13-1 run-rule victories for Lafayette. Lafayette coach Greg Lewis was pleased with his team’s performance as any coach would be when they win back-to-back games by 12 runs.

“We filled up the zone and we hit the ball well,” Lewis said. “We really wanted to do a good job at the plate.”

In the first outing, Byhalia (0-3, 0-2) only managed one hit throughout the four-inning game. The Commodores were held scoreless the first inning, but a hit from Will Cullen in the second got the Commodores rolling. They ended up scoring four runs in the second and continued that momentum in the third and fourth innings while shutting down Byhalia offensively the rest of the game to win the first game handily.

“I was disappointed how we started, popping up a lot, but we managed to find a rhythm and get going,” Lewis said.

The second game would be no different.

A lineup change after the first game allowed most of the Commodores to see the field. The only difference was Lafayette dominating from the beginning with a three-run first inning started by a double from Xavier Martin. A six-run second inning basically ended any hopes of victory for Byhalia as a single fourth-inning run was all the Indians could muster up.

With the score already 13-1 in the bottom of the fourth, the Commodores secured another run-rule victory. While no single Lafayette player really impressed more than the other, five players finished with two or more hits as the Commodores were flawless in nearly every aspect of the game.

The Commodores had more than 10 hits in both games while holding their opponent to only three hits throughout both games. The Lafayette defense was nearly perfect and proved to be a big part of the Commodores’ success.

“That was the main thing tonight, to get a lot of guys in,” Lewis said. “We just about cleared the bench.”

Lafayette had another matchup Saturday against Pontotoc in the Pontotoc Tournament.

Saturday
The Commodores fell to Pontotoc 6-5.

Lafayette scored a run in the top of the seventh inning to break a 4-all tie, but Pontotoc plated two in its final at-bat to get the win.

Lafayette will host crosstown rival Oxford on Tuesday at 7 p.m.