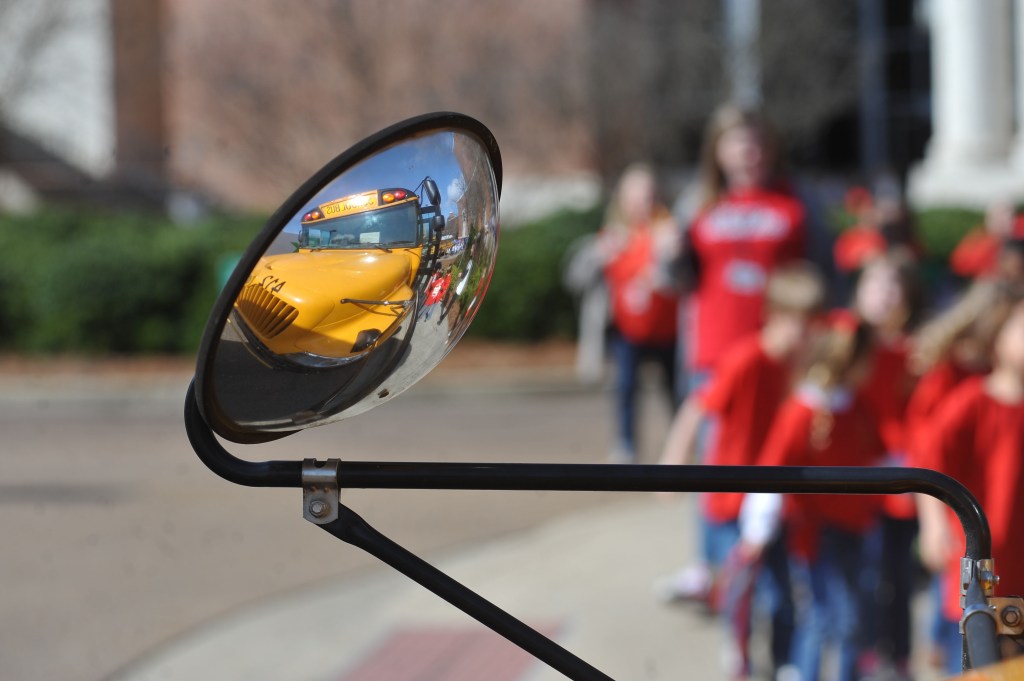 Students load a Lafayette County school bus at the Ford Center on Friday. School, city and county leaders are studying effects of the lower gas prices at the pump on their annual budgets.

Since July, the national average for gasoline has been steadily dropping. While that’s put more money in the pockets of many Americans, it’s also helped to fill the purses of local government and schools.

The average is forecasted to remain at about $1.98 per gallon in 2016 and jump slightly to $2.21 in 2017, according to the Energy Information Administration; however, that is still lower than the national average from January 2015 when gas was about $2.43 a gallon.

In Oxford and Lafayette County, fiscal years begin Oct. 1 and end Sept. 30. The budget process begins around June and departments estimate their gas usage for the year, generally based on EIA predictions.

In the city of Oxford, Public Works Director Bart Robinson said the lower gas prices have given the city “one less thing to worry about.”

“Each year, each department in the city requests the estimated amount for fuel,” he said. “If prices stay low, money in the budget line is ‘leftover.’”

The leftover funds are not spent, but rather rolled over to the beginning cash for the next year and doesn’t stay in the department’s budget — it goes back into the appropriate fund.

“For example, if the street department does not use its entire fuel budget, the left over money goes back into the general fund as beginning cash,” Robinson said. “Over the short term, it does not help the city spend money in other places because we try to budget for the worst case scenario, but over a couple of years, it is possible for the savings to allow the aldermen to allocate the funds to other places or needs.”

“The leftover money makes up a small portion of the $2 million beginning cash we began FY2016 with,” Robinson said.

Lafayette County is enjoying the lower fuel costs, according to County Administrator Lisa Carwyle, in particular with county services.

“We are seeing a decrease in fuel costs compared to budgeted amounts,” Carwyle said. “The sheriff’s department, road department and solid waste department budgets are affected the most by fuel costs.”

The savings is not enough yet to determine if the county can afford to use funds in other needed areas.

“As the year progresses, I’ll keep an eye on the fuel costs and discuss it with the Board of Supervisors,” Carwyle said.

“We’ll look at the most important needs of the county and the Board of Supervisors will make the decision on how to use any excess funds. More than likely they will be used to budget for next year, since we really need to get through the summer, and the bulk of our fiscal year (Oct. 1 – Sept. 30) to get a good idea of the amount of savings.”

For example, the county road department does not always use the same amount of fuel in a month. Carwyle said the road crews are about to get busy with road paving projects.

She couldn’t provide specific numbers but said if looking at dollars and not taking into account each department’s varying usage depending upon the month, “then we’re running about 55 percent of what was budgeted, year to date,” Carwyle said.

The Lafayette County School District projected it would spend $300,000 on diesel and $33,000 on gasoline this fiscal year. The school’s leaders took into account the lower gas prices when planning the budget. Last year’s totals reached $332,125 for diesel and $34,075 on gasoline.

“We never know what gas prices are going to do so I typically, whenever doing the budget, will estimate a little high on gas prices,” said LCSD business manager Mark Brown. “The reason for that is if I estimate low and they go up they can cause me some problems. So I try to estimate a little higher than what I really anticipate them being. That gives me a little bit of cushion.”

Because Brown estimated cautiously, the school district is in good shape financially when it comes to diesel and gas.

“The school district has spent $93,730 in diesel and $18,412 in gasoline this school year,” Brown said. “Gasoline is in line to what we budgeted. Diesel fuel is coming in much lower than what was budgeted. A mild winter along with an increase in the budget, we are aware the price could increase is the reason for a positive budget surplus in diesel fuel budgeted.”

LCSD takes bids each time fuel is needed and in the current school year, fuel has come from Huggins Oil Company and Huron Smith Oil Company.

Brown said if at the end of the year there is a surplus due to the lower prices, it would offset items that ended the year over budget across the district. He said it’s because diesel and gas prices are a part of the operating expense portion of the budget.

At the Oxford School District, fuel usage is monitored by using a FuelMan fueling system.

“There are several locations in Oxford that offer the FuelMan service,” said Sonny Brownlee, OSD director of school services. “Each of the vehicles have a fuel man credit card and each driver has a pin number. We require the employees to enter their vehicle mileage each time they purchase fuel.”

Brownlee said any money saved at OSD from lower costs at the pump would be moved into the fund balance portion of the budget.

This year Brownlee said OSD projected it would spend $416,397 to fuel buses and other vehicles in the district. So far he said the district has paid $128,720, which is less than projected.

Brownlee said he receives a weekly invoice that itemizes each purchase so school leaders can keep an eye on costs.

“We have used surplus this year for construction projects in the district,” he said.