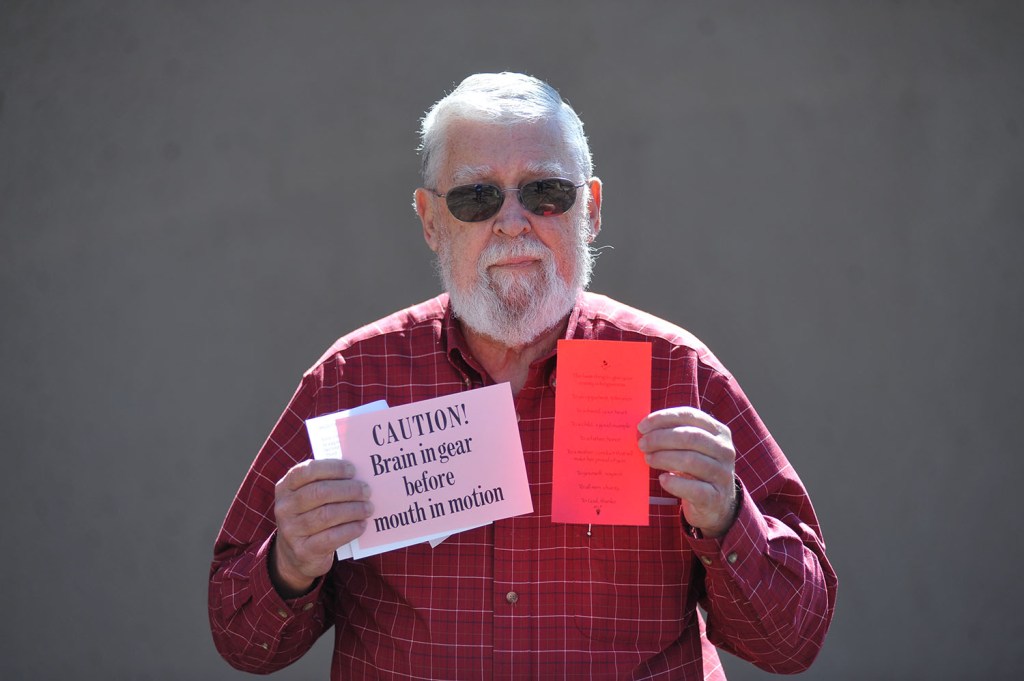 Former University of Mississippi English professor TJ Ray is known for passing out thought-provoking and inspirational cards to those he meets around Oxford.

TJ Ray is a man with many skills and talents and certainly enjoys life and the world around him.

The retired University of Mississippi English professor is known for going around town and passing out motivational and thought-provoking phrases to brighten the lives of others.

The 78-year old is also known for his photography and most recently has become a published author. While he developed those skills in Oxford, it’s not the only place he’s called home. Ray grew up in Winston County in Louisville. He earned his degrees at Mississippi College and he and his wife Mary Jo “wanted to go somewhere.”

He applied at several universities around the world and the last two choices were the University of Alaska and a little Presbyterian university in Puerto Rico.

“She said ‘I ain’t going to Alaska,” Ray said. “So we went to Puerto Rico and taught a year.”

The couple returned to Mississippi where Ray taught at Mississippi State and fell in love with Anglo-Saxon literature, especially Chaucer.

“I hear there’s some other pretty good stuff after Chaucer, but you just can’t prove it by me,” Ray said jokingly.

Tragedy steers him to UM

His plan was to go back to Mississippi State University because he loved his two years of teaching there and being close to his parents.

He had a scheduled meeting with the MSU department chairman in Houston to iron out the specifics, but that chairman committed suicide at the hotel prior to their meeting.

“I don’t know why or know anyone who could tell me why,” Ray said.

It changed his life and career path.

“After that, I just didn’t want to go back to State,” Ray said.

The University of Mississippi had a position available to be director of freshman English. He accepted that in 1971 and taught at Ole Miss for 29 years. He taught Anglo-Saxon, Middle English, history of the English Language and about 15 linguistic courses that he rotated through.

“I really enjoy working with graduate assistants,” Ray said. “All the teaching ones were under me and that was fun. I miss that a lot. I really do.”

When Ray retired, the dean and the chair allowed Ray to teach a couple of graduate-level courses for a couple years. But suddenly the dean said they couldn’t allow Ray to keep teaching.

“So then I really found out what retirement was like,” Ray said. “Oh man, I was miserable for a long time. I would go out there every weekday and have coffee in the lounge and tell lies. I liked the atmosphere.”

Gradually new faces came in and Ray didn’t hang around the campus as much as he used to.

While he was the freshman director of English at Ole Miss, Ray got involved in the very early stages of personal computers in the 1970s.

The department decided they wanted to try some of the new machines and have a writing lab. Ray talked to an IBM guy and a PC was set up in his office. He tried to teach himself how to use it. The department was set up to order 25 IBM computers when Ray got a call from a guy in Moscow, Idaho, who wanted to show Ray a product he was selling.

Ray and several other faculty members met him in the board room of the Lyceum.

“This guy set up this little box,” Ray said. “It was the first Macintosh and he did all this gee-whiz stuff.”

The school changed the purchase order the next day and ordered 25 of the original Macintosh computers for the English lab.

“I still have one sitting at home,” Ray said. “It works like a champ.”

At that point Ray became really interested in using the computers as a writing tool.

“There was some really good software available to help you improve a kids’ writing with a computer,” Ray said.

Apple liked it so much that schools from all around drove to Oxford to see one of the first writing labs using Macintosh computers.

The computer giant began sending Ray around the country to others schools to demonstrate the use of a computer in teaching writing.

“I probably went to 30 states and had a lot of nice trips,” Ray said. “I was an early Apple advocate.”

Ray, who has spent 18 years on the county planning commission, got involved with public service when he was asked to be chairman of the city housing authority. He also spent some time on the Oxford School Board and is proud of his effort to do away with corporal punishment in school.

Ray also spent a number of years in the Boy Scouts of America program.

“I grew up in Scouting,” Ray said. When his son Mark was old enough, Ray organized a Cub Scout pack at First Presbyterian Church and then took over Pack 146 when Buford Babb gave it up. Ray remained leader of Pack 146 for 17 years.

His son Mark, a professional writer, remained with Scouting and has written the Boy Scouts of America handbook and the Scoutmasters handbook. He also writes a monthly column for the national Scouting magazine and the Eagle newsletter.

One hobby that Ray has enjoyed much of his life is photography. He first picked up a camera in high school. Part of his tuition at MC was paid for by the public relations department where he took photos for the school.

He learned to develop film at MC and then had his own darkroom in Puerto Rico where started working with colors and becoming more creative. He bought a portable lab when he was at MSU.

He enjoyed “souping” black and white photos, but not so much with color.

“You’ve got so many trays and all, it’s a dicey game,” Ray said.

But he never got serious about photography until about the time he retired in 2000.

“Maybe I was looking for another raft to get on and photography floated by,” Ray said. “Now it’s gotten very expensive. I still haven’t learned to do it.”

There are three things he really enjoys photographing.

“I like to take pictures of kid’s faces, birds and flowers,” Ray said. “So I go to Sardis usually three times a week.”

He’s had a few photos published in fish and wildlife magazines, but he’s never considered publishing a book of his photos.

New book is out

He has, however, published a new book that came out this week on a historical event that took place in Lafayette County several decades ago.

His book, “Side by Side: Moonshine and Murder in Mississippi,” is dedicated to his late wife.

It’s the story of two moonshiners, one black and one white, who committed the double murder of federal marshals in 1901 and burned their bodies in a house fire to try and cover up their crime. The pair were sentenced to hang and did so, becoming the first known simultaneous hanging of a black man and white man in Mississippi.

Ray was fascinated when he was handed a manuscript on the incident in 1972. He spent decades researching information through old case files and gathering information before finally putting his book together.

“Through all of the research and rooting around courtroom vaults for transcripts, my sweet wife, Mary Jo, supported me,” Ray writes in the preface to the book. “And she deserves the credit for this book, putting up with my trips to courthouses and all.”

His wife didn’t get a chance to read the final product. She passed away last June.