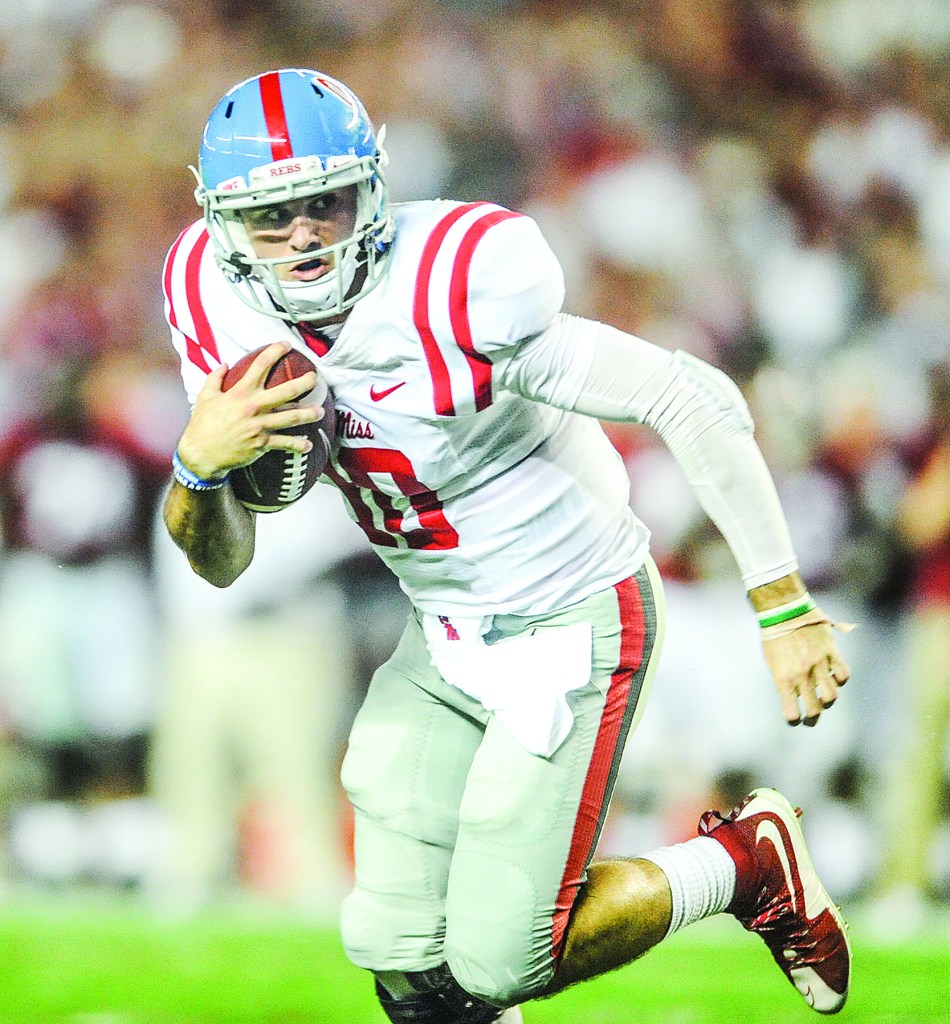 Playing for his third different college team, Ole Miss quarterback Chad Kelly continues to work to rehab his image as he goes through his second and final spring with the Rebels.

Chad Kelly insisted it wasn’t a tough decision to put the NFL off and return to Ole Miss for his final season.

As the new face of the program, the Rebels’ rising senior quarterback is the one who will lead them in that attempt as Ole Miss goes through its initial preparation for the 2016 season in spring practice. Gone are Laremy Tunsil, Laquon Treadwell and Robert Nkemdiche, but Kelly may be the most important holdover given his position after leading the Southeastern Conference in passing (4,042 yards) and total touchdowns (41) while breaking or tying 14 single-season school records in his first year on campus.

It’s a transformation many wondered if Kelly could make this time a year ago when he arrived on campus following a series of off-field issues that have been well documented.

Kelly signed with Ole Miss out of East Mississippi Community College in December 2014 after being dismissed from Clemson for conduct detrimental to the team. Shortly after he signed, Kelly was arrested in his hometown of Buffalo, New York, following an altercation at a bar and hit with several misdemeanor charges before eventually entering a plea deal.

“Was it a concern that he could do something that could bring embarrassment? Of course, but I have that concern with every kid that we sign typically because they’re kids,” Ole Miss coach Hugh Freeze said.

Kelly was given a zero-tolerance policy by Freeze, and there haven’t been any off-field incidents during his time in Oxford with Kelly insisting he’s grown more conscious of the spotlight he’s in as an All-SEC signal caller for a team that’s likely to be a trendy pick to threaten Alabama in the Western Division in the fall.

“You’ve got to come to work every single day on and off the field,” Kelly said. “You’ve got little kids looking up to you. You’re the face of this franchise and this university. You have to understand that every decision you make is going to be criticized.”

Making some changes
Kelly has also made changes in his personal life.

A self-proclaimed Christian, Kelly said he recently dedicated himself to his faith. When some members of the team take a break from spring practice later this month to return to Haiti to finish a water project as part of a mission trip, Kelly will be among them — his own decision this time after being required to go last year.

“It’s taken a lot of people and a lot of time to invest in him to help him see things from a different perspective and a different light,” Freeze said.

Kelly credited Freeze for helping him along the way. Kelly said he often has personal conversations with Freeze where the words are as much about what he is doing off the field as they are about what he’s doing on it.

“Coach Freeze really preaches about it all the time to me,” Kelly said. “Not every once in a while, but every time I see him we’re talking about off-the-field stuff. … He’s just a different type of a character and just a great overall coach.”

There’s still another year to go, and Kelly said he understands he has to make sure he is “making the right decision on and off the field. Just because of what happened in the past, I still have to look forward and just understand I’ve still got this next year where I really have to stay focused on and off the field.”

“I couldn’t be more pleased with what Chad has done on the field and off the field,” Freeze said. “He just continues to seek the type of man he wants to be known. We refer to that as rewriting his story or writing the end of your story. It’s really not about where you start but how you finish. I think right now he’s on track to finish well.”