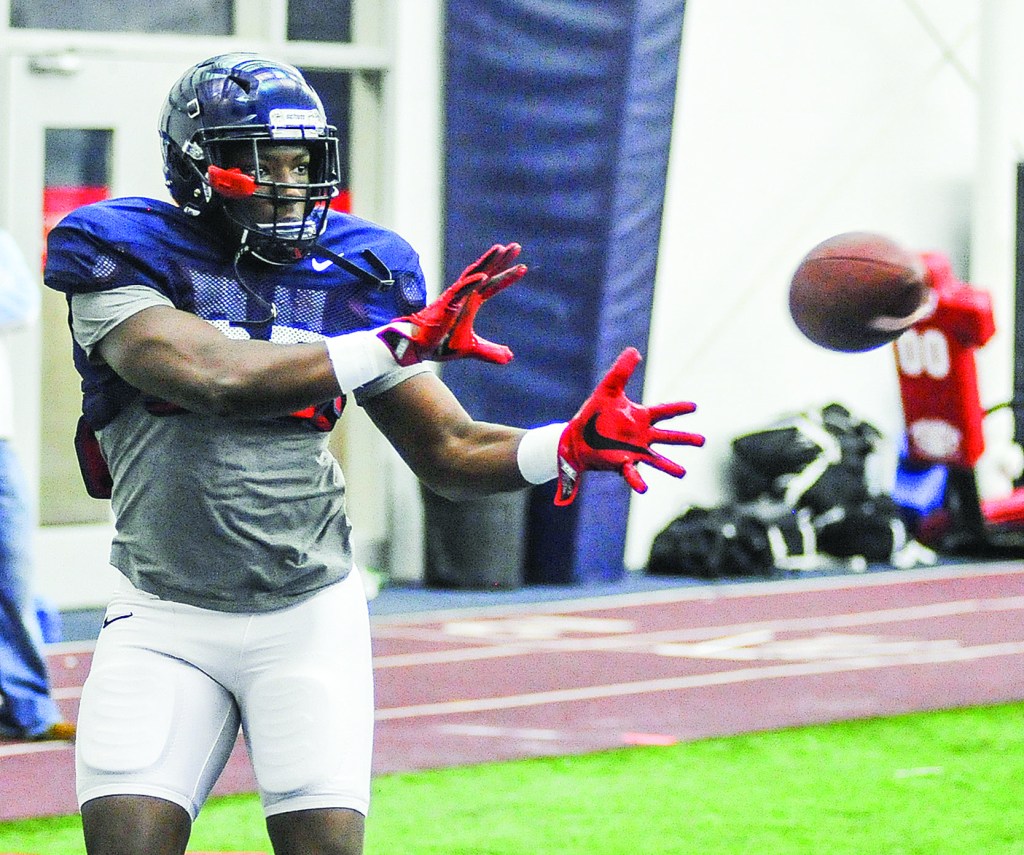 Ole Miss’ football team broke out the pads over the weekend and was in them again Monday during a two-hour workout inside the Manning Center.

The advantage in such practices is with the defense, head coach Hugh Freeze said.

“It was a typical spring first day of pads,” Freeze said of Saturday’s closed practice. “Defense totally dominated the practice, the team periods. They have a lot of looks, and you don’t get to practice them all. And I think our (defensive) line is pretty good. It was pretty dominant by them.”

Rising senior tackle Robert Conyers (knee) and junior guard Rod Taylor (shoulder) aren’t participating in spring practice because of injuries while a true freshman that will be heavily in the mix in the fall, five-star tackle signee Greg Little, has yet to arrive on campus. That’s left little-used Jeremy Liggins, who’s working on both the left and right sides, and redshirt freshman Alex Givens getting the most work at the tackle spots while Sean Rawlings, a rising sophomore, rotates between tackle and center with Javon Patteron and Jordan Sims repping at guard.

Liggins has gone back and forth between tight end and tackle since arriving on campus two springs ago but practiced at tackle during bowl prep, offensive line coach Matt Luke said. Coaches are encouraged by Liggins’ progress at the position to the point where he could actually help there come the fall.

“I think the biggest thing is he just looks more comfortable,” Luke said. “He doesn’t look out of place even with his stance. The communication with the guys, I don’t think he feels like it’s foreign. I think he’s one of the guys, and he’s embracing that role.”

Being cautious with Gross

Freeze didn’t rule out the possibility of defensive tackle Issac Gross being cleared for contact before the spring is over, but even if he is, he won’t do it.

Gross is back for a fifth season after disc fusion surgery in his neck ended his 2015 campaign after one game. Now that Gross is close to returning to full strength, Freeze said there’s no point in risking a setback.

“We’ll let him get all the way through summer and give him as much time as we can to get totally healed,” Freeze said. “He’s pretty determined. I think it’s helped he’s gotten a lot stronger, gotten bigger. Doctors feel good.”

Freeze wouldn’t elaborate on what those will be, though they could include Speaks missing the season opener against Florida State on Labor Day.

“When I discipline my three girls, I don’t tell everybody what that is,” Freeze said. “I try to keep it that way. They’re like my kids. You don’t stop loving your kids when they make a poor choice or a bad decision, but there are consequences. He’ll handle them. He knows it was a mistake, and he’s well aware of it.

“It’s outlined clearly. There’s a way that (the punishment) may not (include missing the opener), but there’s a way it could also.”

Freeze said there haven’t been any significant injuries through the first six days of spring workouts, though some notable players didn’t participate Monday.

Linebacker Demarquis Gates was in a walking boot after suffering a foot injury Thursday while defensive tackle D.J. Jones looked on in street clothes. Running back Eric Swinney  was cleared for contact Monday after dealing with a stress fracture last season.