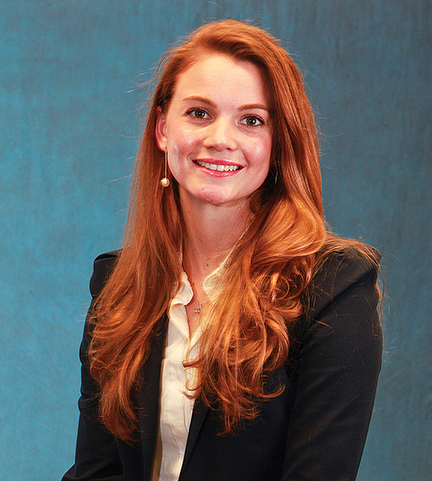 University of Mississippi Olivia Hoff, Gulfport native and UM law student, is one of 25 students featured in the National Jurist magazine.

A University of Mississippi law student is among 25 featured in the National Jurist magazine’s inaugural Law Student of the Year feature, showcasing the many talents and accomplishments of law students across the country.

Olivia Hoff’s name was submitted by the School of Law to be considered for one of the coveted 25 spots.

Hoff, a December graduate, earned a bachelor’s degree in physics with a minor in mathematics from the University of Southern Mississippi. She chose to attend the UM law school because of her interest in air and space law, and the opportunities offered by the Ole Miss program, including a chance to participate in the Manfred Lachs Space Law Moot Court.

“I am extremely honored the law school nominated me for this recognition and am grateful National Jurist magazine chose to accept their nomination,” Hoff said. “The news of my selection came as a bright spot amidst prepping for the Bar exam.”

Hoff and fellow students CJ Robinson and Ian Perry, along with their coach, Michael Dodge, competed in Washington, D.C., in the North American round of the Manfred Lachs International Space Law Moot Court competition, where they took first place in March 2015. The team advanced to the international round in October in Jerusalem, where Hoff and her teammates clenched first place in the final round, beating out Greece.

Dodge said he could see Hoff’s work ethic shine during the preparation for the moot court championships.

“There were several students who impressed me during my time teaching, but I can say that Olivia, and all the hard work and go-to gumption she exuded in her courses and extracurricular work, will leave distinct memories for me,” Dodge said.

Hoff moved to Washington, D.C., in summer 2015 to complete an externship with the Air Force JAG Corps at Joint Base Andrews. During the fall, she completed another externship, also in D.C., with the Department of Homeland Security’s Administrative Law Branch. She considers both these assignments among her greatest achievements.

“She represents the best of what we try to cultivate in law school, and I have every confidence she’ll continue to do herself, and Ole Miss, a great deal of honor,” Dodge said.

A Gulfport native, Hoff is also a member of the Trial Advocacy Board, Phi Delta Phi, the Society for Law of Outer Space and Aviation, Public Interest Law Foundation and the Dean’s Leadership Council, where she helps mentor first-year law students, serves as an ambassador for the law school and gives tours to potential students.

National Jurist magazine, published quarterly, is one of the leading news sources in legal education.