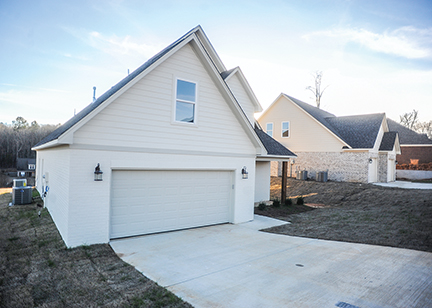 County building inspector Joel Hollowell is going to get some help.

The Lafayette County Board of Supervisors on Monday approved the hiring of assistant building inspector Dustin Arbuckle. Hollowell told the board Arbuckle was one of five candidates who interviewed for the full-time position.

The supervisors approved the hiring at a rate of $16 per hour.

Since he was hired with the county in the middle of 2015, Hollowell has been nearly nonstop after the board adopted new subdivision regulations last May.

Hollowell recently told the board he has issued 165 permits during the final six months of last year. More than 120 of those permits were for residential use and nearly 40 were commercial permits. The permits brought in more than $111,000 for the county coffers.

“If you average how many inspections we do a day, and some days are busier than others, it averages about six inspections a day,” Hollowell told the board last month. “And among that we’re looking at erosion controls, making sure streets are staying clean and contractors are not making all their neighbors angry in subdivisions. And we deal with mobile home developments.”

He also deals directly with the planning commission and in conjunction with county engineer Larry Britt and fire coordinators Wes Anderson and Jerry Johnson.

“And along with that, we’re doing planning reviews with the planning commission to try and head off some problems we might have later on down the road,” Hollowell said. “So we’re all involved and trying to make that process a lot easier as well.”

Supervisors also approved the renewal of an interlocal agreement with the town of Taylor to maintain public roads.

According to county attorney David O’Donnell, the county “receives their tax monies in exchange for maintaining the roads.”

“Apparently the town of Taylor is happy with what the county is doing to this point,” O’Donnell said. “They want contractual assurances that we will continue to do so.”

Meanwhile, county fire coordinator Wes Anderson is trying to save the county some money. Anderson came before the board to inform them of a competitive no-cost share grant that would “pay for two years worth of salaries and benefits for ever how many firefighters we ask for.”

Anderson was seeking permission to apply for the SAFER grant from FEMA, which will be awarding $340 million through the Department of Homeland Security.

“Last year they awarded only 184 grants to hire firefighters,” Anderson said. “So all around the county, it’s pretty much a crapshoot to get it.”

In other matters, the supervisors renewed their commitment with local and private legislation to support the operation of the Economic Development Foundation.

County administrator Lisa Carwyle explained the agreement expires every four years and the county must be re-approved.

“If we wanted to increase that, the legislation would allow it,” Carwyle said.

The supervisors adjourned until their special workshop meeting set for 8 a.m. Friday in the Chancery Building with EDF president Jon Maynard.