CROSSTOWN WIN: Bianco, Oxford use fast start to down ‘Dores 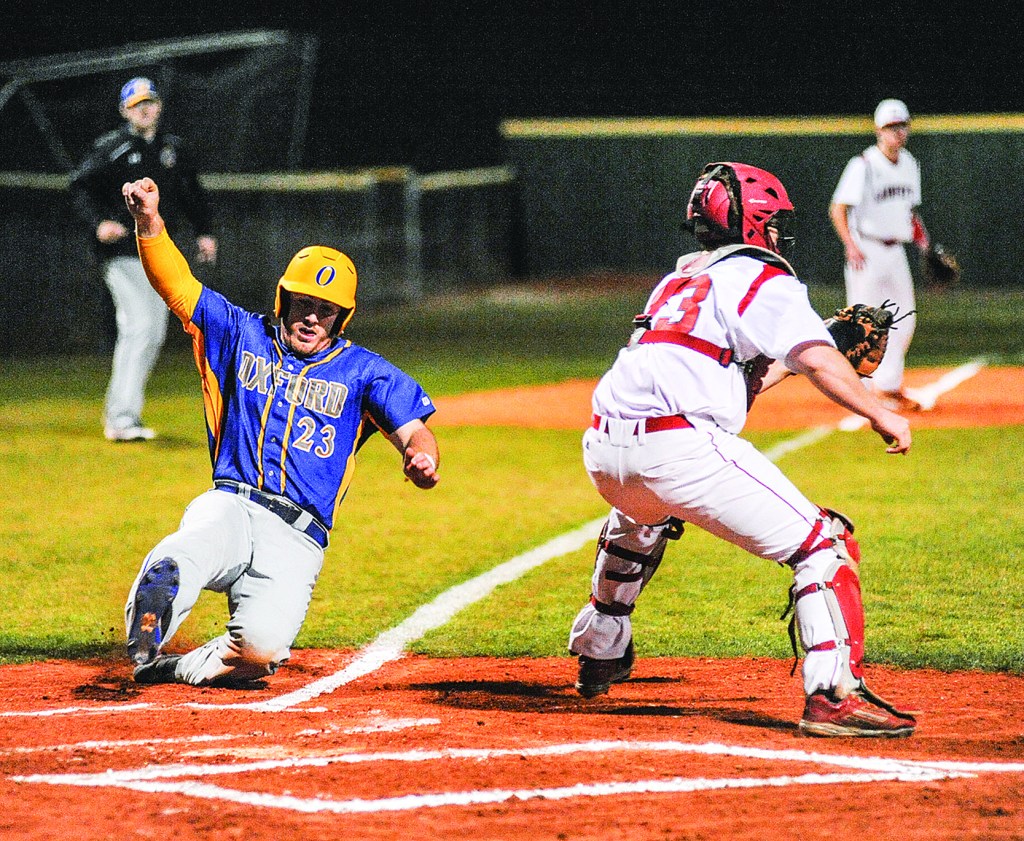 Oxford’s Thomas Dillard (23), scores on a sliding play at the plate while Lafayette’s Ross Ingram (13) awaits the throw on Tuesday at W.V. Brewer Field at Lafayette High School. The Chargers won 9-4.

Needing to save his top arms for his team’s trip to Atlanta this weekend to play in the Perfect Game Showcase, Oxford coach Chris Baughman gave the ball to his everyday second baseman Tuesday.

The Chargers’ offense feasted on some early miscues by Lafayette to back a solid outing by Bianco in his first varsity start on the mound, and Oxford topped the Commodores 9-4 in the first meeting this season between the crosstown rivals at W.V. Brewer Field.

Bianco outdueled Lafayette ace Mack Bishop, giving up two earned runs on seven hits while striking out seven in five innings to get the win. The sophomore right-hander retired the first five batters he faced and seven of the first nine while keeping the Commodores (4-3) off the scoreboard until the fourth inning with Oxford (6-1) up 7-0.

Bishop, who took the loss, labored through his four innings of work with the defense behind him forcing him to throw extra pitches. The left-hander walked three of the first six batters he faced and allowed seven runs on nine hits while fanning three, though three of those runs were unearned thanks to four Commodore errors.

“We’ve been struggling a little bit right now getting it cleaned up,” Lafayette coach Greg Lewis said of his defense. “I’m hoping after this spring break time we’ll get it cleaned up.”

Neither defense did much to assist their pitchers as the teams combined for 10 errors. After plating its first run in the fourth, Lafayette used some of that help to cut the deficit to 7-4 in the fifth with two of its three runs in the frame coming on miscues by the Chargers, but Bianco got Khalil Martin to hit a tapper back to him to prevent further damage.

“I was real proud of him,” Baughman said. “He refocused himself and got us out of some big jams.”

Oxford got one of the runs back in the sixth on Houston Roth’s RBI single and added another on a passed ball in the seventh, and Reed Markle threw two innings of no-hit relief to preserve the win. Thomas Dillard went 3-for-4 with two doubles and an RBI while Ben Bianco and Jason Barber combined to drive in five runs for Oxford.

Martin had two hits for Lafayette. Tyler Williams had an RBI.

Oxford will play its first game in the Perfect Game Showcase against either IMG Academy (Florida) or McEachern (Georgia) on Thursday at 5 p.m. CT. Lafayette won’t play again until Monday in the Oxford Spring Break tournament.