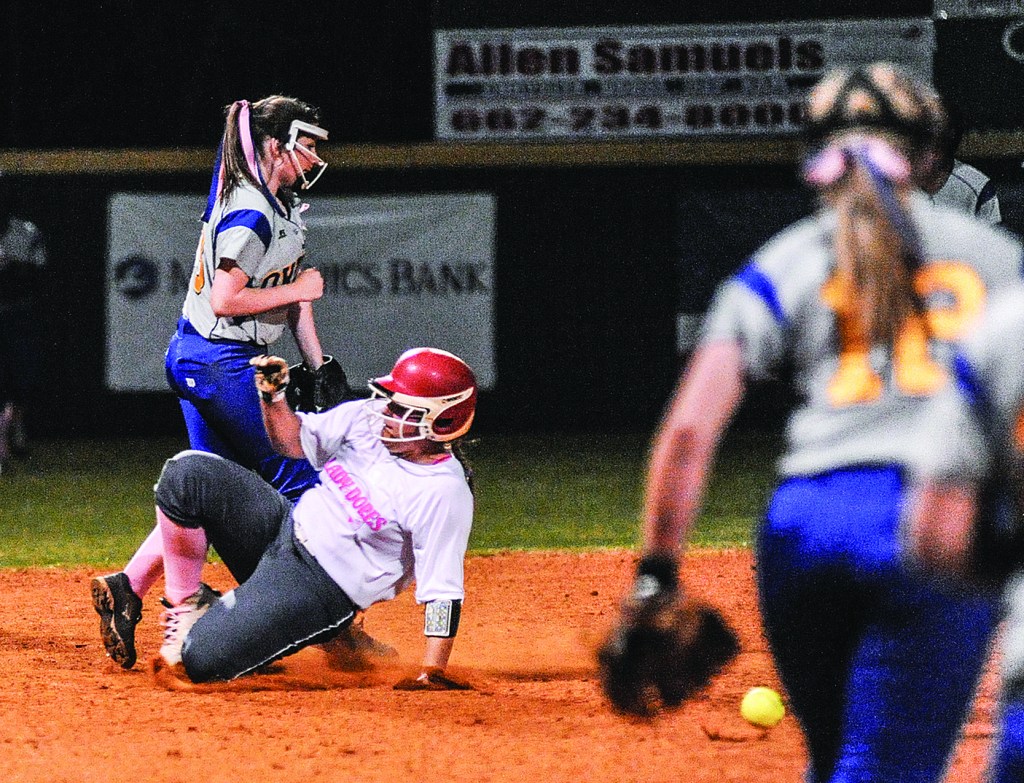 Lafayette’s Hope Patton slides into third during Tuesday’s game against Oxford at the Lafayette High softball field. The Commodores won the annual Pink Out game 11-1 in 5 innings.

Oxford brought the offense early, but it was Lafayette which kept its offense going, defeating the Chargers 11-1 in five innings Tuesday night at the Lafayette High softball field.

The Commodores took the first game of the teams’ two-game season series with the next one taking place at the end of the season at Oxford.

Shortstop Kaytlon Pegues started things off with a leadoff triple to start the game for Oxford and scored on a groundout by second baseman Elisha Webb to give the Chargers the early 1-0 lead.

It was the only scoring the Chargers (2-4) would do as Lafayette starter Madisyn Cobbs settled in and kept the Oxford batters off the bases the rest of her outing. Cobbs allowed only one more hit after Pegues’ triple, a double to center fielder DeDe Mathis later in the top of the first inning.

“They came back and scored a ton,” Oxford coach Steve Blackmon said. “They answered, and we told the girls after the first inning, ‘Obviously you see (Lafayette) didn’t lay down just because we scored one. Don’t you lay down because they scored however many.’ I don’t think we did.”

Lafayette (3-4) did answer in the home half of the first with three runs off three hits. Second baseman Shelbi Buford, who rejoined the team after the basketball season ended Friday in Jackson, reached on an error. She scored off of catcher Hope Patton’s triple, who then scored herself when shortstop Emily Robinson hit an RBI single.

The Commodores added three more in the second inning followed by two runs in the third. They scored three runs in the fifth to earn the run-rule victory. Lafayette scored 11 runs off nine hits.

“We’re pretty good. We’re not going to shut down on anything,” Lafayette coach Katie Moore said. “It’s getting there to where I expect us to be. We’re not there yet I don’t feel like. But we’re feeding off each other more and being more selective at the place and also being smart at the plate.”

Madison Crosby went the distance for Oxford, striking out three and issuing one walk. The big story for the Chargers was the unforced errors and inconsistent infield defense that kept innings alive for Lafayette.

“We haven’t been doing that,” Blackmon said of the errors. “Of course, it’s the sixth game, but we haven’t done that. I don’t know if it’s the crosstown thing or what. (Lafayette) hit the ball to us and they’d get on base. We hit the ball to them, they catch it and throw us out. Over and over and over again.”

Cobbs worked the first three innings for Lafayette while former Charger and current Commodore Chloe Russell closed things out, pitching the final two innings. The duo will have to hold things down inside the pitching circle for the next 10 days or so as Lafayette starter Lauren Jean Rives is out with a fractured hand after hurting it during bunting practice before warm-ups against South Pontotoc on Monday.

“Madison’s done a good job coming in there,” Moore said. “Those two feed off well of each other. I’ve really found that they’re good on the mound. They may be down a 3-0 count, but you never know and they’ll come back and strike them out. They’re learning.”

Playing for a cause
It was the fifth annual Strikeout for the Cure game between the crosstown rivals as each year they raise money for someone in the community who is battling or has beaten cancer and is trying to restart their lives.

This year’s charity is for Kurt Wilcher, who Moore was notified during the game had passed away due after a battle with pneumonia. Moore said they had raised nearly $1,000 for Wilcher, whose wife used to work at Oxford and was a former assistant coach under Blackmon.

“We leave it a pink out for all (the players) to wear pink, but we don’t just focus solely on breast cancer,” Moore said.

Lafayette will travel to Ripley on Thursday while Oxford will participate in the South Panola tournament on Friday and Saturday.