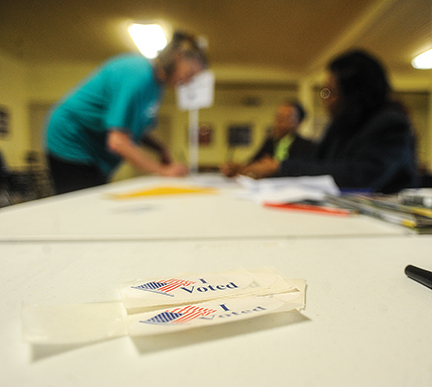 Lafayette County voters didn’t veer too far from how the rest of the state voted in Tuesday night’s primary.

While Hillary Clinton earned the most votes in Lafayette County, she took 64 percent of the vote over Bernie Sanders’ 35 percent.

Statewide, she beat him a bit more soundly, walking away with 83 percent of the Democratic vote.

A little more than one third of the 31,122 registered voters in Lafayette County came out to the polls Tuesday, with 35 percent casting ballots.

In the 1st Congressional race, incumbent Republican Trent Kelly won with 89 percent of the vote across the district and close to 88 percent in Lafayette County against his challenger, Paul Clever. There was no Democratic primary election for the district as Jacob Owens is the only Democratic candidate. He will face Kelly and in the November general election, along with Libertarian Chase Wilson and Reform candidate Cathy L. Toole.

Steve Vassallo, Lafayette County chairman for the Donald Trump campaign, said he was not surprised Trump won in Mississippi.

“I fully expected our state to vote for Donald Trump,” he said Tuesday night. “Winning Hawaii, however, was a pleasant surprise I did not anticipate. Hillary’s defeat in Michigan has opened new questions and concerns about her electability. And one final observation, with the number of people voting in the Republican primary com- pared to the Democrats here in Mississippi, we will gladly award our electoral votes this fall to Mr. Trump.”

Chairwoman of the Lafayette County Democratic Party Cristen Hemmins disagrees with Vassallo, and believes Clinton continues to be a forerunner in the election.

“Hillary’s win in Mississippi last night is testament to her strength as a candidate, and shows that people are excited to vote for our first woman for president,” she said this morning. “It was fitting that we in Mississippi got to vote for her on International Women’s Day. Democrats had two strong options on the ballot yesterday — I’m a longtime fan of Bernie’s as well — but I’m thrilled Hillary came out on top. She’s a fierce fighter, and her deep record of service to our country is admirable.”

Local results were held up in Lafayette County and some other counties in Mississippi due to latecomer Willie Wilson, who petitioned the Mississippi Supreme Court to have his name added to the ballot in February. The Supreme Court ordered the Secretary of State’s Office and each county in Mississippi to add Wilson to the ballot; however, it was not required to be added to any absentee ballots prior to the election Tuesday. That caused the Lafayette County Circuit Court Clerk’s Office to have to add absentee votes twice before a final report could be issued.

According to Lafayette County Circuit Court Clerk Baretta Mosley, the original database received from the state did not have Wilson’s name in it.

“But we still had to use that database for our absentee votes,” Mosley said.

Each vote cast on the absentee ballots had to be manually entered into the new database that included Wilson’s name.

The unofficial final results were ready by 11 p.m. in Lafayette County.

“I don’t think we had any major problems. There’s always glitches that come up, and you never know when they’re going to happen, but everyone works together real fast to fix them,” he said Tuesday night at the Lafayette County Courthouse.