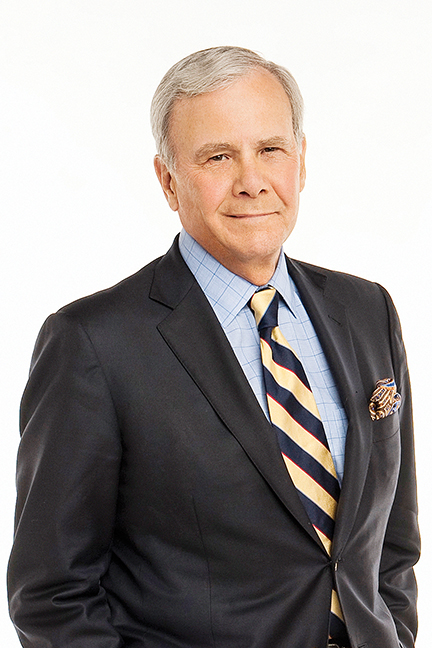 Legendary news anchor Tom Brokaw will give the commencement address at the University of Mississippi on May 14.

Tom Brokaw, one of the most respected people in broadcast news, is returning to Oxford May 14 to deliver the main address at the University of Mississippi’s 163rd Commencement.

Best known as the longtime anchor of “NBC Nightly News,” the journalist and author has visited the university several times over the past decade. He is the only person to host all three major NBC News programs: “Today,” “Nightly News” and “Meet the Press.”

Brokaw, who remains a special correspondent for NBC News, speaks to graduating students, their families and other guests at 9 a.m. in the Grove.

“Tom Brokaw is one of the most astute observers of our culture and its evolution over the past half-century,” Chancellor Jeff Vitter said. “He has enjoyed a front-row seat at some of the most significant events of our time, and his discernments on American politics and life are remarkable. We look forward to his insights and sage advice.”

Recipients of Doctor of Philosophy degrees are to be hooded by their major professors in a 7:30 p.m. ceremony May 13 in the Gertrude C. Ford Center for the Performing Arts. The Sally McDonnell Barksdale Honors College ceremony begins at 4 p.m. at the same location.

A shuttle service for handicapped and elderly visitors is available, and guests who need this service are asked to park in the garage attached to The Pavilion at Ole Miss on Hill Drive. Wheelchairs, if needed, must be provided by families. To request assistance, call 662-915-7235 or 662-915-5203.

In case of rain, the ceremony will be moved to 9:30 a.m. at The Pavilion at Ole Miss. If the weather is threatening, a decision on moving the ceremony indoors will be made by 8 a.m. and announced through media outlets, text messaging and the Ole Miss website.

Besides Brokaw’s address, the main ceremony also includes remarks by the senior class president, recognition for the university’s outstanding teacher and announcements of the Frist Student Service awards and the Distinguished Research and Creative Achievement Award.

Brokaw previously served as a guest lecturer in the UM School of Journalism and New Media in 2010. He also discussed presidential politics in a campus program before the first presidential debate between then-Sen. Barack Obama and Sen. John McCain.

The eldest son of a construction worker and a post office clerk, Brokaw is a native of Webster, South Dakota. He earned a degree in political science from the University of South Dakota, where he worked as a radio reporter, in 1962. He started his career at KTIV-TV in Sioux City, Iowa, before moving on to stations in Omaha, Nebraska, Atlanta and Los Angeles.

In 1973, Brokaw became NBC’s Washington correspondent, covering the Watergate scandal and other major stories. He became host of “Today” in 1976, remaining in that post until 1982, when he was named co-anchor of “NBC Nightly News” alongside Roger Mudd. Brokaw took over as sole anchor of the program the following year. During his tenure, he reported live on the fall of the Berlin Wall, covered the explosion of the shuttle Challenger and conducted the first one-on-one interviews with Soviet leader Mikhail Gorbachev and Russian President Vladimir Putin.

He retired from “Nightly News” in 2004 but when friend and colleague Tim Russert died in June 2008, Brokaw stepped in as interim moderator for Russert’s Sunday morning show, “Meet the Press,” until a permanent replacement could be found.

Since leaving the anchor chair, he has reported documentaries for the Discovery Channel and the History Channel, hosted the baseball documentary series “The Boys in the Hall” for Fox Sports Net and moderated the second McCain-Obama presidential debate, at Belmont University.

As an author, he is best known for “The Greatest Generation,” profiling Americans who grew up during the Great Depression and helped win World War II. His other books include “A Long Way from Home: Growing Up in the American Heartland in the Forties and Fifties,” “Boom! Voices of the Sixties Personal Reflections on the ‘60s and Today” and “A Lucky Life Interrupted: A Memoir of Hope.”

“Tom Brokaw has been a good friend of Ole Miss since his first visit here in 2000,” said Curtis Wilkie, Cook Chair of Journalism and the first fellow of the UM Overby Center for Southern Journalism and Politics. “He and his wife, Meredith, have come back repeatedly to visit the university for both NBC assignments and pleasure, so he’s a great choice for commencement speaker.”

Following the main ceremony, individual schools and the College of Liberal Arts hold ceremonies at various times and locations to present baccalaureate, master’s, Doctor of Pharmacy and Juris Doctor degrees and awards. The schedule is as follows:

• School of Applied Sciences – 11 a.m., The Pavilion at Ole Miss