Bus ridership up in February 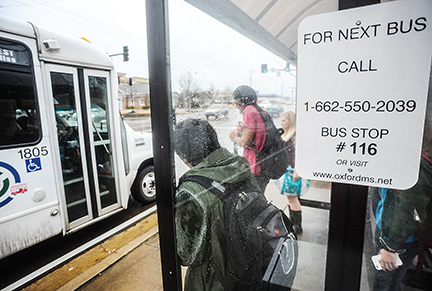 International students made a request recently during an Associate Student Body meeting at the University of Mississippi if bus signs could be made easier to read by having them color coded, according to Oxford University Transit commissioner Jean Robinson.

On Wednesday, Robinson, who also works at the university in the Office of International Programs, said the ASB held a town hall meeting for international students recently.

“They asked if the bus signs that only have the OUT logo could somehow have the color of the route,” she said during OUT’s board meeting.

It was suggested to use colored tape around the sign pole to indicate the route the bus stop was on.

OUT manager Ron Biggs said that could be done inexpensively; however, some bus stops serve multiple routes.

The International students also asked if there could be a later bus for students who stay late at the library. The bus currently runs to about 9 p.m. Biggs said that would require a budget change and route adjustment, and that it was unlikely at this time.

“We’ll be running buses 24 hours a day eventually at this rate,” he said with a chuckle.

Demand for the bus service continues to increase, particularly with the university students.

In February, 168,117 people rode the regular OUT routes and another 3,854 students rode the new Safe Ride route, which brings students back to campus from the Square Thursdays through Saturdays each weekend, making February’s total ridership 171,971. In February 2015, 135, 857 people rode the bus.

Also during Wednesday’s meeting, Biggs said the park-and-ride gold, brown and silver routes that only serve the university would be suspended during spring break, March 12-20.

Commissioner Mike Harris, who is also the Parking and Transportation director at Ole Miss, reported the new transportation hub at the Kennan Observatory is now completely operational.

“We got the benches and trash cans in,” he said.

The hub is the main bus stop on campus and has electronic estimated time arrival signs to show students where each bus is and at what time the bus will be arriving to the hub.

“We have West Jackson Avenue which is on several routes,” he said. “But I’ll think about it and see what we can do.”