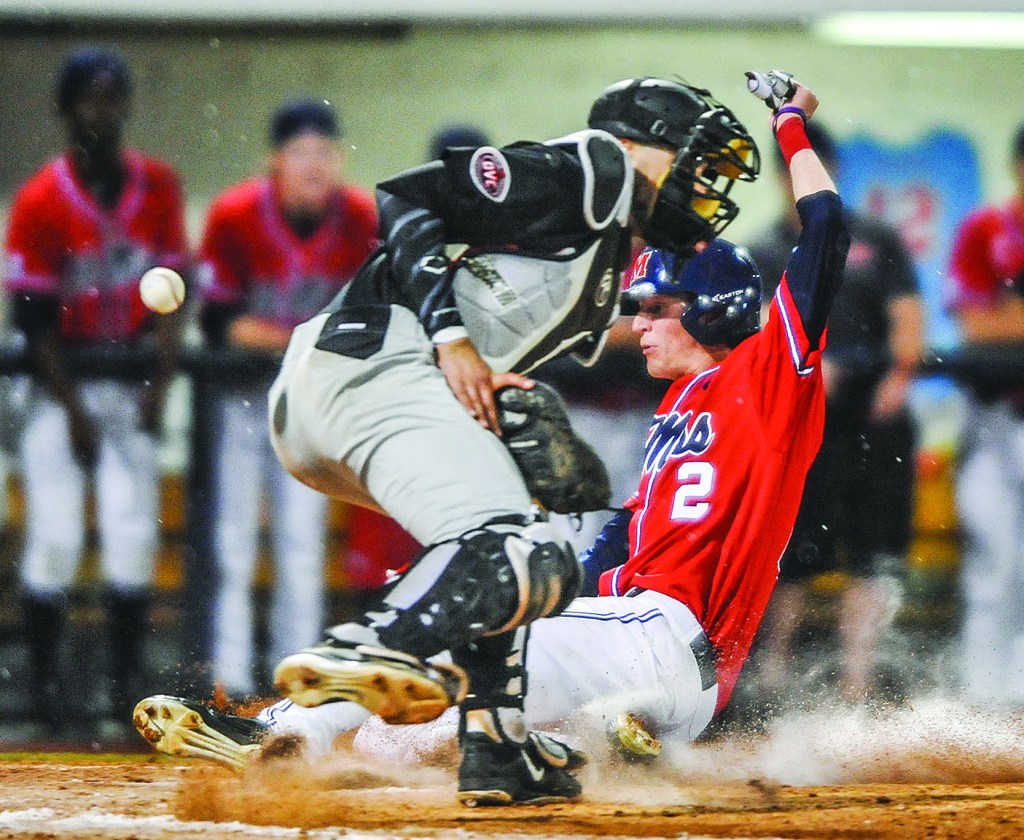 Ole Miss’ Ryan Olenek (2) scores as the ball gets past Southeast Missouri State catcher Brian Lees (17) at Oxford-University Stadium on Wednesday. The Rebels rallied for a 6-4 win.

Once again, Ole Miss fell behind and once again it came up with timely hits.

The 13th-ranked Rebels scored four runs over two innings to complete the comeback for a 6-4 win over Southeast Missouri State Wednesday night at Oxford-University Stadium.

The win earned them a sweep of the two-game midweek series after defeating the Redhawks 10-2 on Tuesday. It was also the seventh straight win for the Rebels (12-1).

After it was announced Tuesday night that scheduled starter Andrew Lowe would be scratched due to battling strep throat, freshman Andy Pagnozzi earned his first career start after having several successful outings out of the bullpen this season.

Pagnozzi worked four innings of four-hit baseball, giving up one unearned run and striking out three batters. SEMO’s first run came off an RBI single by designated hitter Kylar Robertson in the second inning, scoring left fielder Garrett Gandolfo. Gandolfo’s run was unearned due to advancing to second on a fielding error by Colby Bortles.

It was the first of three errors by Ole Miss, which kept innings alive for the Redhawks (6-7).

“The story of the game was we didn’t field the ball tonight,” Ole Miss coach Mike Bianco said. “Unfortunately we put ourselves in some bad situations, but proud of Dallas (Woolfolk) for hanging in there. I think some other freshmen would have let it blow up on them.”

Lowe ended up coming in from the bullpen in relief of Pagnozzi but only lasted an inning-plus, giving up two unearned runs and issuing two walks but striking out one batter. Woolfolk came in to give an inning of relief after Lowe but did allow one unearned run. All of the Redhawks’ runs were unearned.

For SEMO, starting pitcher Adam Pennington was solid through the first five innings before giving up a two-run home run to Will Golsan in the seventh inning to tie the game 4-4. Pennington went seven innings, giving up four runs on eight hits but striking out six Rebel batters.

Ole Miss made contact off Pennington throughout the game, but the defense of shortstop Branden Boggetto and third baseman Andy Lack kept the Rebels from getting anything started or snuffing out rallies before they could begin.

After Golsan hit his second home run of the season and his career, Holt Perdzock pinch hit for designated hitter Michael Fitzsimmons in the eighth inning and provided a two-RBI single to score the go-ahead run as well as one insurance run for closer Wyatt Short.

Short worked the final four outs of the game to earn his first win of the season.

Ole Miss continues its homestand with a three-game series against Grambling State starting at 6:30 p.m. on Friday.

CROSSTOWN WIN: Bianco, Oxford use fast start to down…