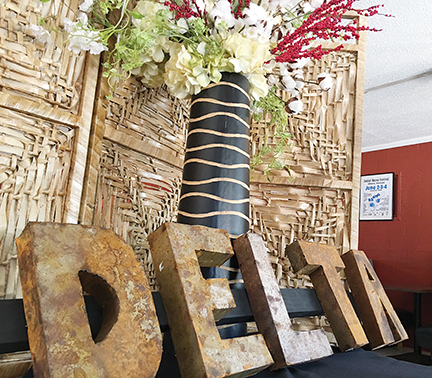 Though it’s technically not in the Oxford city limits, Delta Steak Company is certainly a part of the Oxford community.

Sitting at the corner of a four-way stop in the center of Abbeville, the decor reflects memories of a life once lived in the Delta.

After getting their start in 2013 near the University-Oxford airport, Allen and Erin Sanders packed and moved up Highway 7 to Abbeville, bringing their restaurant. “We didn’t realize the kind of following we had,” Allen Sanders said.

The Delta Steak family relocated in spring 2015 and only missed a week of service during the move. “We literally had a week to get moved over here,” Sanders said. “It was a tough week only because we had never been in this building before.”

Allen, his staff, friends and family got the current location ready in a short time and opened for business just about a year ago. They serve everything from red meat and pasta to fried green tomatoes and seafood. If you want it, Delta Steak Company probably has it.

“It was good,” said customer Jayce Simpson of Shreveport, Louisiana.” The fried oysters were superb, and they had a great wine selection to choose from that went well with their delicious steaks.”

At Delta Steak Company, you can sit and talk to someone during the lunch hour about what the Rebels are going to do next season on the gridiron, and by the time you’ve finished eating, you will feel like old friends.

“Everyone here is going to get the same treatment,” said Sanders. “Whether they’re filthy rich or spending their last dollars for the week, everyone is treated the same. That’s just who we are.”

Sanders and his wife, Erin Sanders, realized the following they had when the 2015 Ole Miss football season came, and they didn’t have any seats left.

“I knew football season would be busy,” he said. “It has continued on past that. It’s really been a snowball effect since the day we opened in 2013.”

Now that football season has been over for a few months, one would think they’d get a break from the rush of Rebel fans, but that hasn’t proven true. The couple had to close their doors Valentine’s Day weekend because of the high number of reservations. They aren’t complaining.

“We have slow times like any other business,” Allen Sanders said. “It’s been pretty consistent for us though. It’s been great. We love it here.”