Lyles is LSD Teacher of the Year 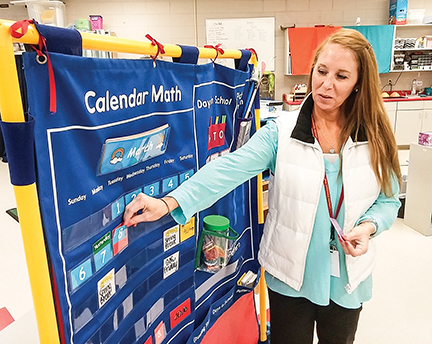 Fellow teachers had Marcia Lyles pretty convinced she’d be Lafayette Upper Elementary School’s teacher of the year, but it was a surprise when she learned she received the same honor for the entire school district.

Lyles, 41, has been a special-education teacher at LUES the past six years, and prior to that was a teacher assistant in Alabama and DeSoto County school systems.

She teaches all subjects for 16 special education students in the third through fifth grades and earned the “district teacher of the year” award for her efforts.

“They pick a teacher from each building on our campus and once they get the four teachers from each building, we have to write an essay basically what it means to us to be teacher of the year, and the superintendent and others read the essays and pick who gets the award for district,” she said. “I was shocked. I’m in competition with a lot of other teachers who have been here a lot longer than me.”

She received the honor in February and it didn’t distract her from ensuring each of her students followed his or her strict schedule or keep her from focusing on improving  their cognitive abilities, which in turn helps promote good behavior.

One of her favorite classroom tools is using Applied Behavior Analysis, and another program has yielded strong results in the classroom — Edmark.

“I have a favorite program called Edmark, a reading program, and it’s used a lot with children with autism, and it basically teaches to read by sight instead of the phonetics, for students who don’t have the phonetic awareness of sounding out,” she said. “So it’s basically memorizing words instead of sounding them out because a lot of children with disabilities, sounding out is just an ability they don’t have, and it’s very frustrating. Then you see the behavior because you’re telling them to sound it out and they don’t have that skill. So Edmark relieves a lot of that frustration level.”

Seeing the children learn is the most rewarding part of her time as a teacher.

“I think my favorite part is when my students have that ‘ah, ha’ moment of when I’m teaching something and essentially the light bulb comes on and they say, ‘oh, I get it,’” Lyles said. “You teach a lot of the same skills until they master it, and when they finally master it or they get to that moment, that’s my proudest moment.”

She said she’s come a long way with her students since they first came through her classroom doors in August and there’s now a more peaceful atmosphere where the students want to learn with the special techniques. She has one success story in particular.

“There’s one student I started getting when he was in second grade,” she said. “I walked down to the other building to pick him up and bring him up here to work with him. When he came to me, he knew one through five, could not read, could maybe write half of his name, and now his strongest subject is math, he’s counting up to 120 by himself, he’s in fourth grade this year, and he is more than willing to get a book off the shelf to read it to have points.”

While Lyles enjoys going home to pop open a book herself, work out, travel or spend time with her fiancee, 19-year-old son and 94-year-old grandmother in the Tula community, there are two days a week she doesn’t run home right away.

Tuesday and Wednesday afternoons she works with the homebound program.

“When children are too medically fragile to come to school they assign a teacher to them and I volunteered myself,” she said. “It’s challenging in a sense that you go to a person’s home, but it’s a good service.”

Lyles was born, raised and graduated in Lafayette County, and she is ensuring every child has that same chance, no matter their circumstances.