More rain on the way 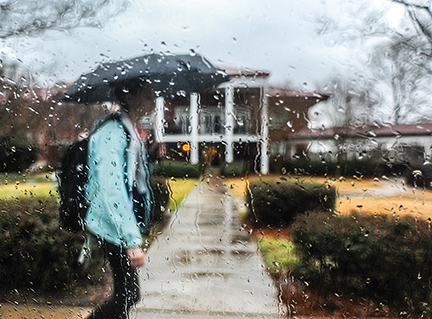 Rain rolls down a window as pedestrians walk by in Oxford, Miss. on Friday, March 11, 2016.

Lafayette County remains under a flood watch until at least 6 p.m. this evening, according to the National Weather Service.

More than 4 inches of rain fell in Lafayette County Thursday and more is expected throughout the weekend.

“We’re have some minor street flooding in the city,” Allgood said Thursday afternoon. “There’s always a concern when you get this much water but it really depends on the rate and how fast it’s coming down.”

Allgood said the city’s drainage systems were handling the heavy rain so far.

“We’ve had periods of really heavy rains but then it slacks off for a bit, giving it time to drain off,” he said. “If it starts to overwhelm the storm drains and they get blocked up, then it could be a problem but we’re constantly monitoring that.”

The rain is expect to continue though Monday morning. Allgood said no severe thunderstorms or tornadoes are expected — just a lot of rain.

“There may be the occasional thunderstorm,” he said. “But the worst threat with this system is going to be the rain.”

Flooding in the region

The National Weather Service says 3 to 10 inches of rain has fallen in counties along the Mississippi River in West Tennessee, eastern Arkansas and north Mississippi since late Tuesday, flooding roads, parking lots and fields.

In southern Arkansas, heavy rainfall prompted the closure of some schools and roads, and forecasters say the deluge will continue there for the rest of the week. Meteorologists with the National Weather Service say officials have reported water rescues and evacuations near Dermott, Arkansas, as water rises in low-lying areas.

Over 10 inches of rain fell Thursday night into this morning, reportedly flooding 40-50 homes in Hammond, Louisiana. Numerous roads were flooded and closed in Hattiesburg and a bridge collapsed in Laurel.

“They needed help to evacuate the nursing home,” he said.

Last year the Mississippi State Department of Health provided kits to counties to help convert a school bus into a traveling ambulance for large-scale emergencies. Lafayette County School District donated a bus to be turned into an ambulance bus, or more commonly known as an AMBUS. They also sent a bus driver from the district along with Shaw down to the Delta Thursday with the AMBUS.

“The nursing home administration decided not to evacuate,” Shaw said. “But we left the bus with their emergency management services to use today if they decide they need to go ahead and evacuate the nursing home.”

Shaw said as of Thursday afternoon he hadn’t received any reports of major flooding in the county, at least in areas where there are homes. However, he said the area has three more days of wet stuff to deal with and warns residents of attempting to drive over any road covered in water.

“Remember the saying, ‘Turn around, don’t drown,’” he said. “Even large puddles can be a danger — if you hit one doing 60 miles per hour, it could knock you off the road.”

Shaw said a potentially dangerous road is where the County Road 105 crosses Toby Tubby Creek off Old Sardis Road as it generally floods during heavy rains.

“We get people who attempt to drive over it every time and someone gets stuck and their engine dies,” he said. “Luckily, we haven’t had anyone washed off the road but the potential is there and can be dangerous. We are asking no one try to drive through roads that appear to be flooded.”

Associated Press contributed to this story.

Lyles is LSD Teacher of the Year