ONE AND DONE: Rebels bow out of SEC tourney with loss to Alabama 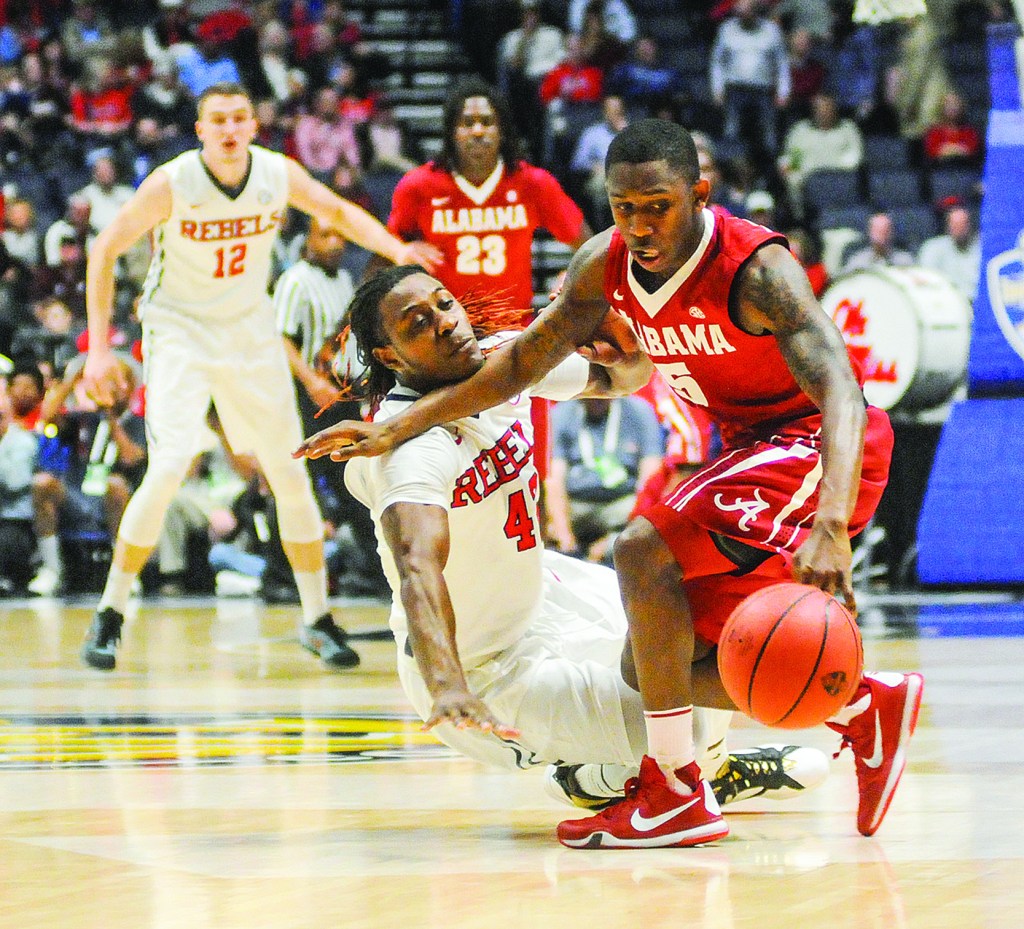 Alabama’s Justin Coleman (5) goes for a loose ball with Ole Miss’ Stefan Moody (42) during their second round game of the SEC men’s basketball tournament inside Bridgestone Arena on Thursday at Nashville, Tenn. The Rebels were eliminated after a 81-73 loss.

NASHVILLE, Tenn. — Stefan Moody did everything he could do.

But Ole Miss’ stay at the Southeastern Conference tournament was once again a short one, falling to Alabama 81-73 in its tournament opener Thursday night at Bridgestone Arena. Needing a run to Sunday’s championship game to even spark conversation about the NCAA tournament, the Rebels (20-12) will now wait to see if they get an invite to the National Invitation Tournament (NIT).

Moody led all scorers with 39 points for the Rebels, but a significantly more balanced attack by Alabama did Ole Miss in. Retin Obasohan led four Crimson Tide players in double figures with 17 points while only one other Rebel — Tomasz Gielo with 11 — reached double figures.

“They came down and made plays when they needed to in order to advance, and obviously that’s what this type of season comes down to,” Ole Miss coach Andy Kennedy said. “I don’t think you ever have to worry about guys playing hard and playing with a sense a desperation. I thought both clubs did that, and ultimately Alabama just made more plays.”

Moody blew past his SEC-leading 23.1-point average to match the second-highest single-game scoring total in tournament history in what could’ve been his final game in an Ole Miss uniform. He finished 12 of 27 from the field, 8 of 17 from 3-point range, 7 of 10 from the free-throw line and also grabbed eight rebounds while playing all but two minutes before fouling out late.

But he didn’t have nearly enough help against the hot-shooting Crimson Tide (18-13).

Hot hand
Alabama, which finished the regular season ninth in the league in 3-point shooting (33.7 percent), made 50 percent (12 of 24) of its attempts from beyond the arc and took control midway through the second half. Justin Coleman’s 3-pointer capped a 9-0 spurt with 8:03 left to give Alabama its biggest lead at 66-52 with Ole Miss getting no closer than six the rest of the way in its second straight one-and-done showing in the tournament.

Obasohan, Alabama’s leading scorer, scored all of his points in the second half. Riley Norris went 4 of 6 from deep on his way to 16 points while Arthur Edwards and Coleman each scored 15. Alabama shot 53 percent from the field while the rest of Ole Miss’ team combined for just 14 field goals.

“It’s my job. I embrace it,” Moody said of carrying the scoring load. “I don’t look to my teammates and complain at them for anything. I embrace it. So I do what I can.”

Alabama knocked down eight of its first 13 3s to make a run in the first half without Obasohan, who picked up two fouls less than five minutes in. Norris had three of those treys as the Tide went on an 18-7 run with Obasohan watching from the bench to go up 26-19 midway through the first half.

Ole Miss stayed close thanks to Moody, who scored 17 of his points in the first 20 minutes with no other Rebel scoring more than eight in the half. Five of Moody’s first six field goals came from deep, his final 3 cutting Alabama’s lead to 40-36 at the break.

“We basically said we know (Moody) is going to score 20, but we’ve got to try to deal with the other guys,” Alabama coach Avery Johnson said. “I’m proud of the way we defended the other guys.”