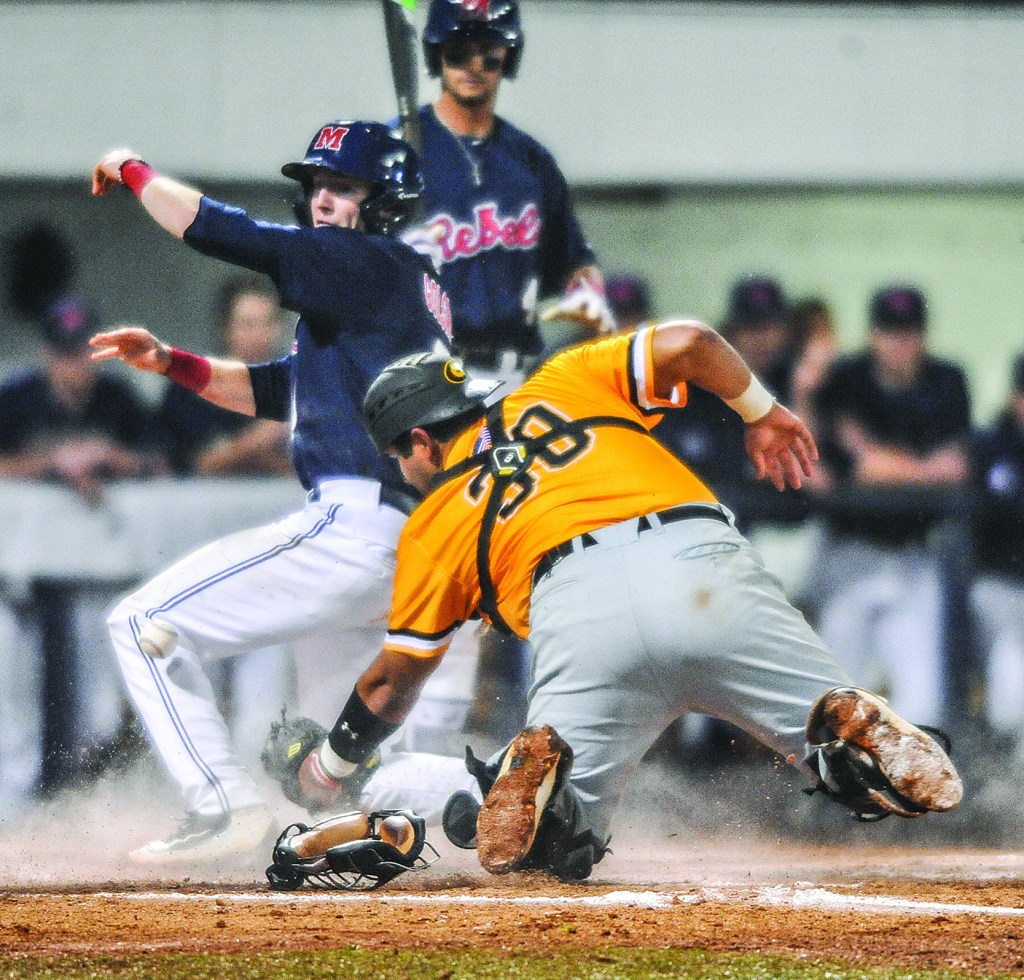 Ole Miss’ Will Golsan (8) scores on a double steal as Grambling State catcher Johan Mojica (38) takes the throw at Oxford-University Stadium on Friday. The Rebels won 15-2 to give head coach Mike Bianco his 700th career win and 600th at Ole Miss.

Brady Bramlett was dominant on the mound, and the offense struck early and often as No. 13 Ole Miss defeated Grambling State 15-2 on Friday at Oxford-University Stadium.

The Rebels (13-1) took the opening game of the weekend series for their eighth straight win. It was also a milestone for head coach Mike Bianco as it was his 700th career win and 600th at Ole Miss.

“I’m proud, but I’m proud because one, you’re at one place a long time and a lot of wins,” Bianco said. “It’s certainly done by a lot of great coaches. A lot of fans and administration that’s believed in the program for 15-plus years.”

Bramlett worked five innings of scoreless ball, giving up four hits and striking out 11 to stay undefeated on the year (4-0) heading into Southeastern Conference play Friday at Tennessee. He was one strikeout shy of tying his career-best.

“Fastball was really working tonight,” Bramlett said. “Slider later on, I kind of found that. I was struggling early on with it. … I feel great, body feels great. I feel as a team we’re competing really well and playing some good baseball.”

Ole Miss jumped on the Tigers (4-7) immediately, scoring five runs in the first inning. The Rebels followed that up with two runs in the second, one run in the fourth and three in the fifth. Errol Robinson was responsible for the damage in the fifth inning with a three-run home run, his first on the season.

Cameron Dishon got in on the fun, hitting a solo shot in the seventh inning. Colby Bortles was 2-for-4 with three RBIs while J.B. Woodman went 2-for-3 with two RBIs.

The Rebels were efficient at the plate and on the basepaths as they were 9-for-22 with runners on and 7 of 18 with runners in scoring position. Their patience was rewarded often, going 4-for-12 with 2 outs.

Senior Matt Denny made his second appearance of the season, working 1.2 innings of relief. The left-hander was responsible for Grambling’s two runs, though one was unearned. He walked two and struck out one.

“I don’t know what it is, whether it’s chemistry or more leadership, we’re just clicking on all cylinders right now,” Bramlett said of the team’s start to the season. “From here, we can only get better to where we’re clicking even more.”

ONE AND DONE: Rebels bow out of SEC tourney…