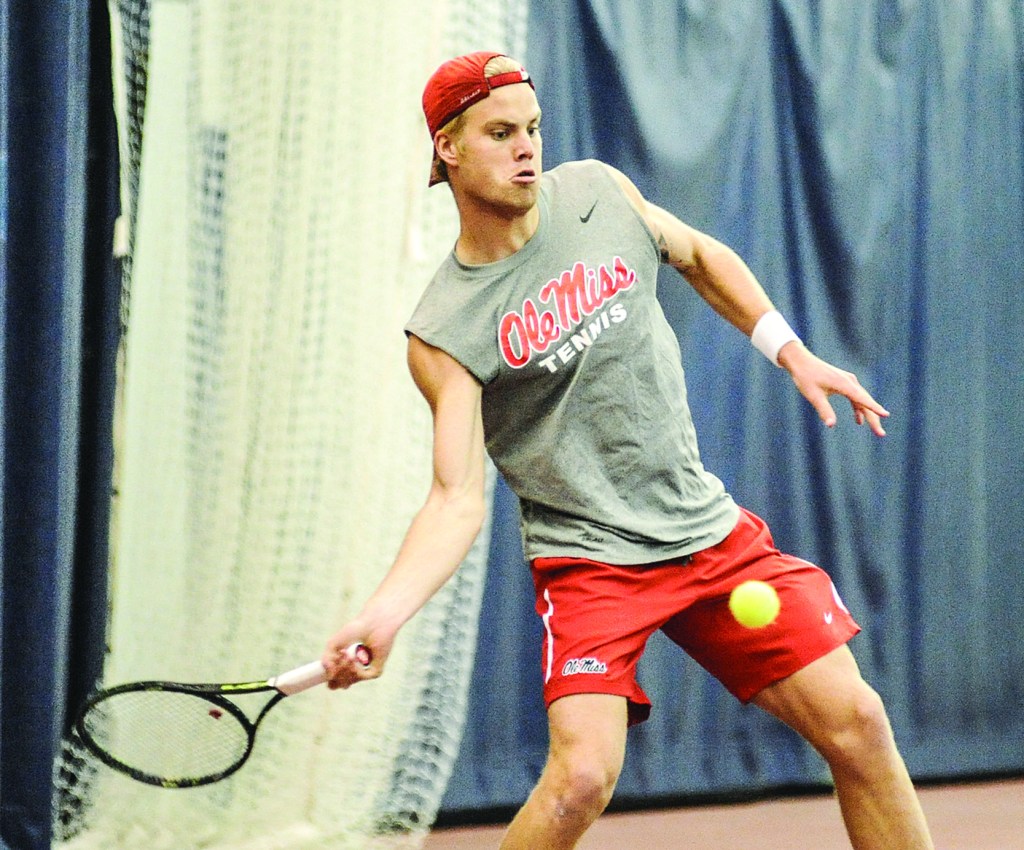 Rain forced the No. 22 Ole Miss men’s tennis team’s Southeastern Conference home opener against LSU indoors to the Gillom Sports Center, but the Rebels were on fire from the start on their way to a 4-1 win Friday night.

It’s spring break and both baseball and softball were hosting home series, still more than 200 fans showed up to watch, and the Rebels gave the crowd plenty to cheer about.

Back together for the first time in a while, Stefan Lindmark and Gustav Hansson earned a 6-2 win at No. 3 doubles. LSU’s eighth-ranked team of Jordan Daigle and Boris Arias won 6-3 at No. 1. Fabian Fallert and Grey Hamilton survived an early break to secure a 6-2 win at No. 2 doubles and clinch the 1-0 lead for the Rebels.

With three courts, the Rebels’ top three players went on court seeking to build on the momentum. In a battle of two nationally ranked players at No. 1 singles, Lindmark started strong against Daigle winning the first set 6-4. He broke early in the second and finished off Daigle 6-2 to give the Rebels a 2-0 lead.

LSU got on the board when Justin Butsch defeated freshman Filip Kraljevic 6-0, 6-3 at No. 3 singles, but that would be it for the Tigers on the evening.

Hansson pretty much popped the Tigers’ balloon when he was able to finish off Gabor Csonka in two sets to make it 3-1 Ole Miss.  After winning the first set 6-3, Hansson started rushing things a little and Csonka capitalized to go up a break. He served for the set twice, and each time, Hansson answered, ultimately forcing a tiebreaker. Csonka took the first two points in the breaker, but Hansson won five straight to go up 5-2 and ended up winning it 7-4.

That left the Rebels with three players to get one point for the victory. It was a race to the finish, as Fallert, Hamilton and Zvonimir Babic all won their first sets. With Fallert holding a match point at four, Hamilton finished off LSU freshman Nikola Samardzic 6-2, 7-5 for the win.

Notes
• Ole Miss improved to 7-3 overall, 2-1 in the SEC. They will welcome No. 7 Texas A&M today.
• Grey Hamilton won his fourth straight and improved to 3-0 in the SEC. It was also the first match he has clinched for the Rebels.
• Hamilton is now 4-1 in the SEC dating back to last season.
• Stefan Lindmark improved to 13-6 overall and 7-2 at No. 1 singles.
• This marked the second win in a row for the Rebels against LSU.
• Gustav Hansson improved to 15-7 overall, 6-2 at No. 3 singles.
• The Rebels have now won the doubles point in seven of their 10 matches.

Coachspeak
“Getting the doubles point was huge and then Stefan looked impressive out there against a very good player at No. 1,” Ole Miss coach Toby Hansson said. “Gus winning a tight second set to finish his opponent off in two really seemed to deflate LSU. Being up 3-1 and then winning all the first sets on the last three courts, we were just waiting for any one of them to finish it off. Overall, it was a great team effort from top to bottom. We were very pleased with the attitude and the energy from the guys today. This is probably the best match we’ve played all year top to bottom.
“We had a great crowd for spring break and softball and baseball going on at basically the same time. They were into it, they really helped us get the doubles point and get the win today. We really appreciate everyone coming out and would love to see another big crowd again (today).”