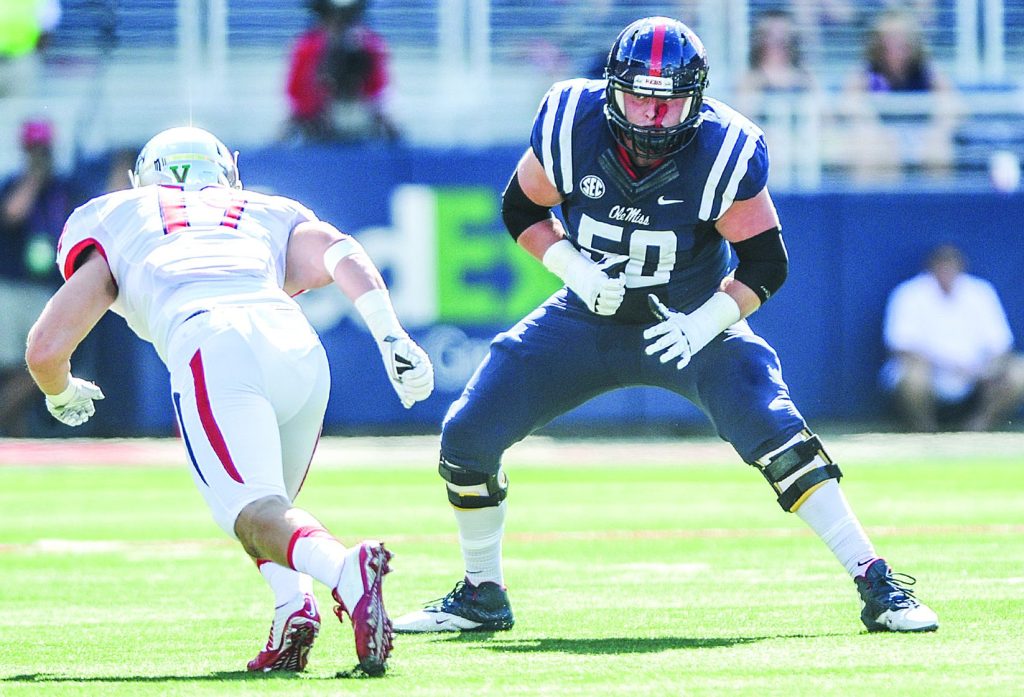 Ole Miss’ coaches are trying to get a head start this spring on evaluating the pieces vying to take over on an offensive line that lost all five starters from the Sugar Bowl, but that’s turning out to be a difficult task.

The Rebels have experienced players back at the position, but not all of them are practicing. Two projected starters, rising senior Robert Conyers (ACL surgery) and junior guard Rod Taylor (shoulder surgery), are on the shelf as they rehab injuries from last season.

Conyers has been a swingman the last couple of years, alternating between tackle and center depending on where the Rebels have needed him any given week, but head coach Hugh Freeze said he’d like to keep Conyers at tackle full-time. With Conyers out and five-star signee Greg Little not yet on campus, former tight end Jeremy Liggins and redshirt freshmen Alex Givens and Michael Howard have been getting most of the work at the tackle spots vacated by Fahn Cooper and Laremy Tunsil, a candidate to be the No. 1 overall pick in this year’s NFL Draft.

Rising sophomore Sean Rawlings is repping some at right tackle where he started seven games a season ago, but he’s getting most of his reps as the first-team center. Coaches would like to keep Rawlings on the interior come the fall, but he and Conyers will again be ready to play both if needed.

“It’s tough right now because Robert is not out there,” offensive line coach Matt Luke said. “I’m getting Sean some experience at center because I kind of think he can go out there and play tackle. But I’m getting him reps at both. I repped him at right tackle (Monday), and he had been working at center the past three days. So I’m kind of moving him around a little bit just to make sure that we do have that flexibility.”

Jordan Sims and Javon Patterson are running with the first team at right guard and left guard, respectively, after combining for eight starts last season. Patterson started the first three games as a true freshman before giving way to a healthy Aaron Morris the second half of the season.

“Javon as a true freshman was unbelievable,” Luke said. “It was more about Aaron being a fifth-year senior than Javon not playing well. Javon did really well with his snaps.”

Comfort zone
Perhaps the biggest development has been the strides made by Liggins, who experimented at tackle some last spring before settling in as a reserve tight end in the fall. But the 6-foot-3, 315-pound Liggins said he’s found a permanent home on the offensive line, and coaches have spoken highly about the former Lafayette High standout looking more natural at a position where the Rebels are thin.

“I feel like I belong there,” Liggins said. “I played there last spring, so I know the calls and checks.”

But with so many moving parts among a group that will have to wait until the summer to be fully intact barring any more injuries, Ole Miss is a long way from solidifying itself up front.

“By the end of spring, hopefully we’ve improved the ones we have,” Freeze said. “That’s what our job is, and I love the effort they’re giving and the work they’re giving.”