UM Confederate statue to have a plaque 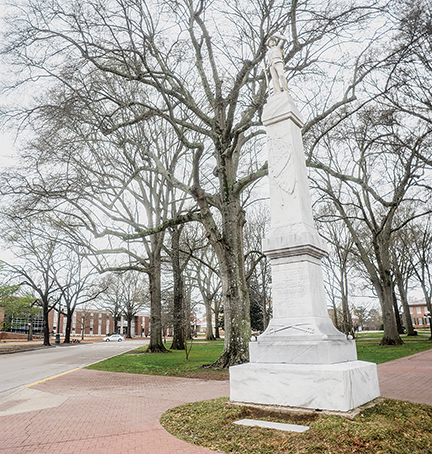 Bruce Newman A Confederate statue sits in the Circle at the University of Mississippi. Installation has begun on a plaque that will provide historical context and is expected to be completed by the end of the month.

A plaque that will provide “historical context” for the statue of a Confederate soldier is currently being installed at the entrance to Lyceum Circle at the University of Mississippi. Work is expected to be complete by the end of the month.

The inscription engraved on the plaque reads:

“As Confederate veterans were passing from the scene in increasing numbers, memorial associations built monuments in their memory all across the South. This statue was dedicated by citizens of Oxford and Lafayette County in 1906. On the evening of September 30, 1962, the statue was a rallying point where a rebellious mob gathered to prevent the admission of the University’s first African American student. It was also at this statue that a local minister implored the mob to disperse and allow James Meredith to exercise his rights as an American citizen. On the morning after that long night, Meredith was admitted to the University and graduated in August 1963.

“This historic structure is a reminder of the University’s past and of its current and ongoing commitment to open its hallowed halls to all who seek truth and knowledge and wisdom.”

The creation of the plaque is in response to a key recommendation of the 2014 action plan during the administration of chancellor Dan Jones. At that time, the university renamed a short street near Fraternity Row from Confederate Drive to Chapel Lane. Jones recommended that the university do more to tell the history of slavery, secession, segregation and their aftermath in Mississippi.

“Our university has worked hard to recognize our history while also living up to our promise as one of America’s most hospitable, welcoming and inclusive institutions,” Chancellor Jeffrey S. Vitter, who came to the university in January, said in a statement from the university. “The placement of this plaque puts this statue into proper context and affirms, as in our UM Creed, our respect for the dignity of each person.”

Many hours of study and thought have gone into the design and wording of the plaque, Vitter said.

“I would like to thank the committee members, Drs. Donald Cole, Andy Mullins, Charles Ross and David Sansing, who were appointed by Dr. Morris Stocks to draft the language of this plaque,” he said. “They have done an outstanding job of balancing history and perspective, and we owe them our thanks for their thoughtful work.”

“The benefit of placing a plaque at the Confederate statute on campus provides context and helps us better understand our past,” said Sansing, emeritus professor of history. “Neither the statue nor the plaque answer all the questions about our past. The placement of this plaque is just one example of the university fulfilling its mission as an educational institution by pursuing knowledge and understanding.”

“The key unifying feature of this committee is that we all love the University of Mississippi,” said Cole, assistant provost and assistant to the chancellor for multicultural affairs, in the press release. “As we worked together to carefully choose the wording for the plaque, we really wanted anyone who read it to know it to be truthful.”

The display of Confederate symbols has come under broad debate across the South since last June, when nine black worshippers were massacred at a church in Charleston, South Carolina. The white man charged in the slayings had previously posed for photos online holding the rebel flag.

In a student-led effort last fall, the university stopped flying the state flag because it includes the Confederate battle emblem.

Recently, Gov. Phil Bryant was criticized by many for declaring April “Confederate Heritage Month” in Mississippi.