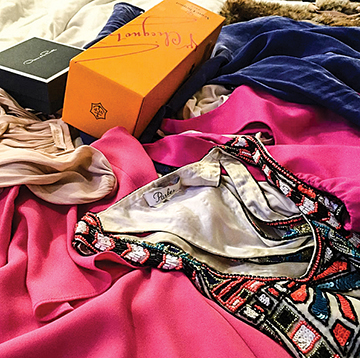 With the Nimble app, University of Mississippi students can rent clothes and other fashion items with a click of a button.

Sara Kiparizoska, 21, walks into the house wearing a white turtleneck and jeans with booties carrying a green Starbucks smoothie with her name misspelled in Sharpie ink. She makes herself comfortable, sprawling out on a bed as if she were in her best friend’s home.

The University of Mississippi student has created a fashion app called Nimble that is bursting at the seams in Oxford. College students and others are using it to rent and borrow each other’s dresses.

Originally from Macedonia, Kiparizoska studies biochemistry at UM with plans to become a surgeon. During the interview, she received a business call, but ignored it. “We can’t handle the workload,” she said. “We like to say we are the local version of Rent the Runway.”

Rent the Runway is a business that began as an Internet site that provides designer dress and accessory rentals throughout the U.S. It now has several retail stores.

Kiparizoska recently hired two marketing interns who handle Nimble’s Instagram and blog along with a team of coders from the University of Mississippi.

She and co-founder William Ault conceived the idea one day while discussing what to wear to an upcoming event. Wishing she could see all of the Oxford girls’ closets, Kiparizoska had an idea.

Kiparizoska and Ault first entered a business competition and presented the app. They didn’t win, but stuck with it.

The app launched Jan. 25, with 40 users the first week. In just four weeks, they had 1,000 users and are receiving requests from all over the country.

Kiparizoska hopes students at all SEC schools will be using the app within the next year. She also plans to add jewelry and other clothing.

“We want to move into the professional world, not just college campuses,” she said.

Nimble user Toni Cruse recently downloaded the app. “It’s sometimes better than online shopping,” she said. “Plus it comes the day I put in the request, so I never have to wait to try it on or worry about it getting to me in time of my event. It’s very convenient.”

Kiparizoska said she’d like to sell the app in a couple of years when she is in medical school. Right now, she enjoys running the new business with her team.

Kiparizoska, who is a member of the Sally McDonnell Barksdale Honors College, said she chose the University of Mississippi over Ivy League schools because of the school’s hospitality and the academic opportunities afforded her as an honors student.