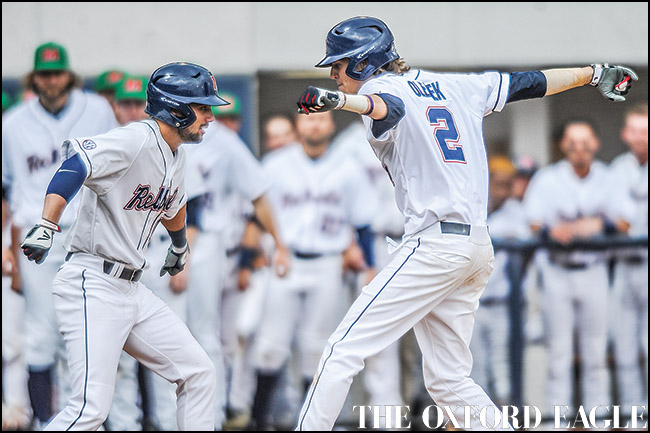 Ole Miss’ Ryan Olenek (2) is congratulated by teammate Cameron Dishon (14) after hitting a home run against Grambling State in the first game of the teams’ doubleheader at Oxford-University Stadium on Sunday. The Rebels won 7-3 before taking the nightcap 6-1 to complete the sweep.

Grambling State made it an interesting day, but in the end, Ole Miss managed to avoid an early season disaster.

The No. 13 Rebels swept the Sunday doubleheader with a 6-1 win in the second game at Oxford-University Stadium for their 10th straight win. Ole Miss (15-1) took Game 1, 7-3, earlier in the day to sweep the weekend series. Saturday’s game was postponed to Sunday due to inclement weather, causing the two seven-inning contests.

Sean Johnson took the mound in the second game but was not his best, going only 3.2 innings and striking out two. He was responsible for Grambling State’s only run, though it was unearned due to a fielding error by center fielder J.B. Woodman.

The Rebels got on the board first after a successful double steal involving Errol Robinson and Will Goslan. Golsan stole home for the 1-0 lead in the bottom half of the first, though Robinson was thrown out at second base.

Woodman was responsible for the go-ahead run with a solo home run in the third inning, his third of the season.

Third baseman Colby Bortles had a successful series, hitting 7 of 10 for six RBIs over the weekend, including a solo home run in the first game on Sunday.

“I felt comfortable,” Bortles said. “I think I felt comfortable earlier in the year, just didn’t get the hits I wanted. I thought I hit balls hard everywhere, but I got a couple to fall today and real happy about that.”

Brady Feigl, who earned his first win of his career, worked 1.1 innings of relief and got out of a jam with two runners in scoring position and two outs in the fourth inning, earning a strikeout to end the threat. Will Stokes worked the last two innings to earn his second save of the season.

Another key play happened in the fifth inning as Grambling (4-9) had runners at the corners. Robinson caught a hopper and made the throw at home to preserve the 2-1 lead at the time.

The Rebels’ bats woke up for two runs in the bottom half of the frame and added two more in the sixth for the winning margin.

Game 1
Chad Smith had a shaky start and Grambling took an early 2-0 lead, but then the Ole Miss bats came to life to claim the first game of the doubleheader.

The Tigers took the lead after scoring two runs in the top of the second inning. It could have been more as the bases were loaded, but Smith got a strikeout and a flyout to end the threat.

“I just don’t think they had good stuff today,” head coach Mike Bianco said of his two starters. “I thought Sean, especially, velocity was down. His command wasn’t there. Smith, his stuff, velocity and whatnot, was pretty normal. I just don’t think he was very sharp and sometimes that happens. … (Grambling) made both the guys really work and the bullpen’s been spectacular for us, and to not go to those guys in a short game is not a smart thing to do.”

Ole Miss responded with five runs in the bottom of frame on four hits to take a 5-2 lead. The scoring was highlighted by freshman left fielder Ryan Olenek’s first career home run.
Bortles added to the homer barrage with his second of the season in the fourth inning.

David Parkinson and Wyatt Short combined for two innings of relief out of the bullpen. Short, the junior closer, earned his fourth save of the season, moving to fifth all-time in career saves at Ole Miss with 17.

The Rebels will be on the road for spring break with two games against UAB in Birmingham, Alabama, on Tuesday (6:30 p.m.) and Wednesday (11:30 a.m.) followed by the start of Southeastern Conference play at Tennessee on Friday.