Couple loses everything in house fire; under investigation 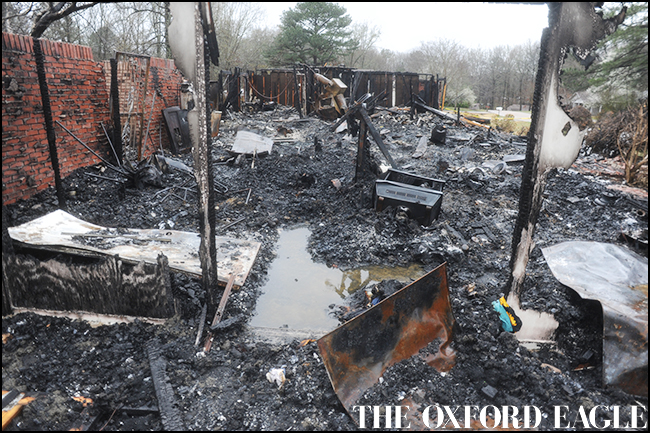 Bruce Newman A house in College Hill Heights was recently destroyed by fire. The cause of the blaze remains under investigation.

A house fire that destroyed the home of well-known local gospel singer Josephine Wells earlier this month remains under investigation.

According to Lafayette County Fire Coordinator Wes Anderson, fire units responded to a stove fire on March 1 in the College Hill Heights neighborhood and were able to put the fire out. But 13 hours later, Engines 10, 2 and 4, as well as other county fire units, responded to the same residence and found the home fully involved upon arrival.

Anderson said the fire is currently under investigation by the Lafayette County Sheriff’s Department and fire investigator Randy Jones.

Attempts to reach Jones about the investigation have not been successful.

Meanwhile, friends are coming together to assist homeowners Josephine and Wilbon Wells, who lost all of their belongings when the blaze swept through their home on Happy Lane.

Mari Kuhnle works as a nanny for Courtney Kneupper and Alan Arrivée, who live across the street from the Wilsons, and they are spearheading the effort to assist the couple.

They are also collecting food items and clothing for the couple. Kuhnle said Josephine Wells wears a size 8-10 in pants and dresses, medium or large tops and size 7 ½ or 8 shoes. Her husband is a size 36/34 in pants, wears extra large shirts and size 11 shoes.

Donations for the couple can be dropped off at Magnolia Montessori on College Hill Road.

Lucky to be alive

Josephine Wells, who sings with the gospel group the Christian Crusaders, said she was alone in the home when it caught fire the first time and feels fortunate she got out of the residence alive.

“I was in my bedroom and heard a popping sound,” Wells said of the first fire. “I looked outside and thought it was a car backfiring so I went back to bed.”

Twenty minutes later, the fire alarm in the house went off and Wells said she went to the front of the house.

“And low and behold the whole kitchen was on fire,” Wells said.

Wells said she remembers running back to the bedroom to look for jewelry. “But then something told me to get out of the house,” Wells said.

She left the residence, but returned into the house to look for her jewelry.

“I went back into the house to look for my diamonds,” Wells said. “But smoke was filling up the hallway and I said, ‘Oh my God’ and I couldn’t hardly see anything.”

Wells said she grabbed her housecoat and crawled to the front door and got out of the house. She then called 911 to report that her house was on fire.

She said firefighters were able to put the fire out, but the kitchen was a total loss from smoke and water damage.

She and her husband went and stayed the night at a hotel and returned the next morning to find the home was totally destroyed.

She said neighbors reported the second fire at 2:30 in the morning.

“It was all gone,” Wells said. “This is devastating. It’s almost like a death to lose everything.”

She said she’s been told the electric stove exploded and caused the fire that completely destroyed the home.

The Wells have insurance and plan to rebuild the home. Currently, they are staying in an apartment. She asked that if anyone had a spare TV, she would love to have it.

“I’ve slept with the TV on my whole life and not having it makes it difficult for me to sleep.”

They may have lost all of their belongings, but Wells feels fortunate.

“I feel lucky to get out with my life,” Wells said. “I have my life if I don’t have anything else.”