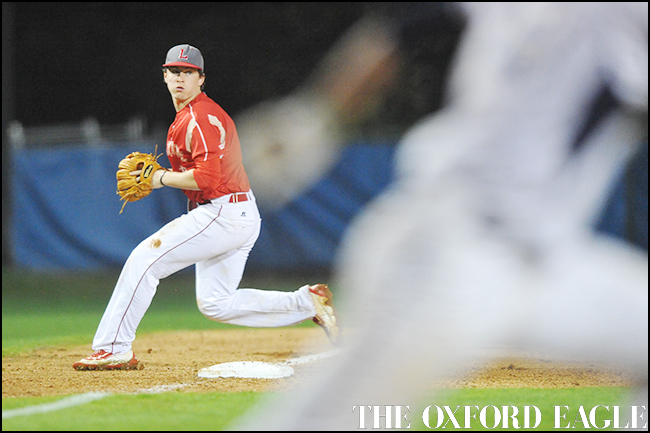 Lafayette third baseman Will Ard steps on third for a force out and throws to first for a double play during the Oxford Spring Break Tournament against Arlington on Monday at Edwin Moak Field. The Commodores lost 4-1.

After nearly a week off, Lafayette began its stretch of three games in four days Monday night in the Oxford Spring Break tournament.

The  Commodores did not get off to the start they hoped for, falling to Arlington (Tennessee), 4-1, at Edwin Moak Field on the Oxford Middle School campus. Arlington got the tournament started with a 14-4 win over New Albany in five innings earlier in the afternoon.

Luke Gossett got the start for the Commodores (4-4) and had a rough start to his outing with an extended first inning. Gossett threw more than 30 pitches in an inning that was kept alive by two Lafayette errors from first baseman Mack Bishop. Arlington took advantage by scoring two runs for the early lead.

Gossett worked the next two innings, ending his night after three innings of work and being responsible for all four runs with the last two coming in the third.

“I felt we kind of got that deer-out-of-the-headlights look after the first inning,” Lafayette coach Greg Lewis said. “That’s what we’re looking for. Turning a couple double plays was big. Great job by the pitchers just hanging in there.”

Bryce Hertl replaced Gossett on the mound to start the fourth inning but found himself in a jam during the fifth. He allowed Arlington to load the bases with zero outs, causing Lewis to turn to his shortstop, Will Cullen, to try and minimize the damage.

Cullen did more than minimize as he got the Commodores out of the jam with a forceout at the plate followed by two straight outs at first to keep the Tigers off the board completely.
“He locked it down for us,” Lewis said of Cullen’s performance. “He did a great job of keeping us in the game and at least having a chance at it.”

Silent bats
Lafayette struggled at the plate early against Tigers starter Hayden Edwards, who pitched a complete game, and could never get any offense going. Edwards kept the Commodore batters off balance, giving himself some quick innings.

Lafayette hitters were not patient at the plate early on with quick at-bats and even had a four-pitch third inning. Edwards ended the night throwing less than 80 pitches in seven innings of work.

“We did a better job at the plate at the end,” Lewis said. “We’re still not looking for that one good pitch. We’re still hitting their pitch right now, and I know that’s going to happen with this team right now. If we get through this tournament and give it a week or two, I feel like my guys are going to do a great job at the plate. We struck out three times and hit seven fly balls. I told them I can live with that, but they just need to attack a better pitch.”

The week does not get any easier for Lafayette as it continues in the tournament with a game against Tupelo on Wednesday at 5 p.m. followed by a rematch with Oxford, after losing to the Chargers 9-4 last Tuesday, on Thursday at 7 p.m. to close out the tournament.

“If we get through this week, it gets easier for us,” Lewis said. “If we can figure out how to win some this week and play good ball, it’s only going to make us better.”