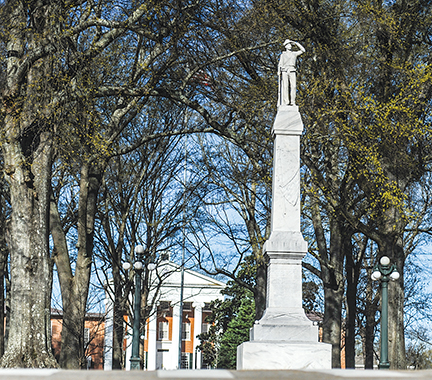 Bruce Newman The Confederate statue is at the entrance to the Circle at the University of Mississippi. A plaque university officials are installing near the statue has come under scrutiny from the campus chapter of the NAACP.

JACKSON — A plan to add context to a Confederate soldier statue at the University of Mississippi is a failure because a proposed plaque does not mention slavery as the central issue in the Civil War, the campus NAACP says.

Chancellor Jeffrey Vitter announced Friday that construction had started for a stand to hold the plaque and could be finished by the end of the month on the Oxford campus.

However, the campus NAACP said Monday that the university’s proposed language “woefully fails its students, faculty and staff when it does not acknowledge the true history of the Confederacy.”

The addition of a plaque is part of an effort announced in 2014 to promote racial diversity and provide context for Old South symbols at Ole Miss, a school where sports fans used to wave Confederate battle flags to cheer teams that are still called the Rebels.

The proposed plaque says the Confederate statue was dedicated by local citizens in 1906 and was one of many monuments built across the South as aging Civil War veterans were dying. It also notes that the statue was a rallying point where a mob gathered in 1962 to oppose the admission of James Meredith as the first black student at Ole Miss.

“It was also at this statue that a local minister implored the mob to disperse and allow James Meredith to exercise his rights as an American citizen,” the plaque says.

It continues, “On the morning after that long night, Meredith was admitted to the University and graduated in August 1963.

“This historic structure is a reminder of the University’s past and of its current and ongoing commitment to open its hallowed halls to all who seek truth and knowledge and wisdom.”

The NAACP said there’s no need to mention “our university’s fearless activist, James Meredith” to provide context for the Confederate statue.

Vitter, who became the university’s top administrator in January, said Friday that the plaque confirms the Ole Miss creed of “respect for the dignity of each person.”

The effort to provide historical context at Ole Miss was announced by Dan Jones, who was chancellor in 2014. The university renamed a short street near Fraternity Row from Confederate Drive to Chapel Lane. Jones recommended that the university do more to tell the history of slavery, secession, segregation and their aftermath in Mississippi.

In a student-led effort last fall, the university stopped flying the state flag because it includes the Confederate battle emblem. The display of Confederate symbols has come under broad debate across the South since last June, when nine black worshippers were massacred at a church in Charleston, South Carolina. The white man charged in the slayings had previously posed for photos online holding the rebel flag.