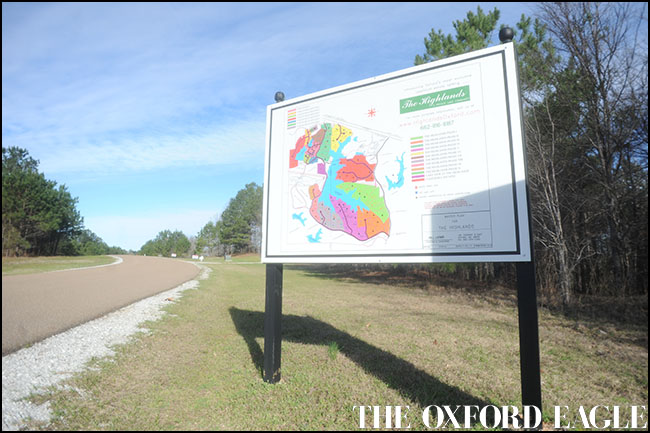 Bruce Newman A sign at the entrance to The Highlands this morning indicates planned development. Planning commission members are considering new regulations that will affect developers and builders in the county.

Several residents showed up at Tuesday night’s special county planning commission meeting to voice their opinion on a change to current subdivision regulations that would define how many apartments or condos would be allowed on a piece of property.

Commission members opened the meeting by tabling the matter in order to allow public input and to further explore the change before their next meeting on March 28.

Most of those residents who spoke to the commission were from The Highlands subdivision and urged commission members to hold off making the change to the regulations until after the county has completed their comprehensive plan.

Most of those who spoke said they had not heard specifics on the change to the regulations, only rumors.

County engineer Larry Britt agreed that they would have preferred making the change to coincide with the comprehensive plan, but found it necessary to over the last several months to change the regulation specific to apartments and condos . The county had changed the regulations to include so many units per acre for subdivisions, trailer parks and recreational vehicle parks.

“We didn’t address how many apartments or condos you could have on a piece of land,” Britt said. “Whatever we do now is a real good chance it would have to be changed when the comprehensive plan comes out. “

Glen Ingram, another Highland resident who commended the commission for tackling the issue of planning for growth, was also concerned that developers will try to begin developments before the comprehensive plan is complete in order to circumvent the regulations that are expected to be in place.

He and his wife Ginny built a million-dollar home and have retired to Lafayette County from North Carolina.

Due to the lack of regulations and an example of a builder trying to rush a development before the new regulations are in place, a slab was poured across the street from his home and has sat vacant since October. He said the lot will have a 2,700 square foot house, which will devalue his home.

“A rush to put programs out will drive developers and builders in here like you can’t believe,” Ingram said.

His wife said they built their home thinking there would be other single-home developments around them.

“I don’t care how much we spent to build a house. That doesn’t matter. What matters is that we’re building a community that’s good for everybody,” said Ginny Ingram. “And when somebody goes in and builds a home where they think they’re going to be in a single dwelling development and then part of the property can be piecemealed off for either apartments or condominiums, that hurts. Please don’t rush to judgment on this.”

Among the changes is that only certain items can be burned, the fire must be monitored at all times, resources must be available to manage the fire and the builder must have a burn permit. The penalty could include a fine of up to $500 for each violation.

The committee that has been exploring the changes to the subdivision and building regulations created the new regulation with the assistance of the Lafayette County Fire Department, according to Ray.