MIXING IT UP: No. 12 Rebels use small, long ball to down UAB 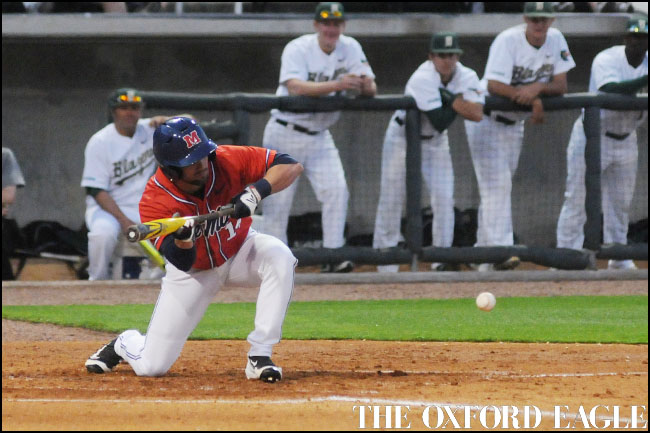 BIRMINGHAM, Ala. — It is spring break in Oxford, and the Ole Miss baseball team left town for a five-game stretch against UAB and Tennessee.

The trip got off to a solid start as the No. 12 Rebels defeated the Blazers 8-1 at Regions Field on Tuesday night to extend their winning streak to 11 games.

The offense has come from up and down the lineup for the Rebels (16-1) during the string of wins, and Tuesday it came from the bottom of the lineup as right fielder Cameron Dishon scored runs every which way.

Ole Miss got off to a hot start, scoring three runs in the top of the first to give starter Andy Pagnozzi a comfortable lead before he ever took the mound. Third baseman Colby Bortles hit a two-RBI double to the center-field wall, plating Will Golsan and Errol Robinson.  Second baseman Tate Blackman hit a sac fly to bring Woodman home for the early 3-0 lead.

“We got off to a good start, and it was a good night for a lot of guys,” Ole Miss coach Mike Bianco said. “We kind of did it a lot of different ways. … We continue to swing the bat well and continue to move runners.”

Dishon accounted for two RBIs, but they both came by two very different methods. His first RBI was a solo home run, his third of the season, in the fourth inning to make it a 4-0 lead at the time. The next inning with the bases loaded and two outs, Dishon laid a bunt down the third-base line, which UAB third baseman Esteban Tresgallo was unable to haul in to score left fielder Ryan Olenek to make it 5-0.

Dishon finished the game 2-for-3 and had two successful bunts while Bortles went 1-for-4 with two RBIs. Henri Lartigue, who went 3-for-5, got in on the home run fun with a two-run shot, his first on the year, that cleared everything and left the park over left field in the ninth inning.

“(UAB) had a mound visit, and I just walked over to coach B(ianco) and he was like, ‘Hey, if the drag’s there, take it,’ and I took it,” Dishon said. “Seeing a pitch earlier and getting the bat on the ball and seeing how the grass was going to play really helped me out.”

Pagnozzi had another productive outing after earning his first career start last week against Southeast Missouri State. The right-hander earned his third win on the season, working 6.1 innings of two-hit baseball and striking out four batters. He faced three batters above the minimum. With Tennessee looming this weekend, Pagnozzi gave Ole Miss what it needed — a lengthy outing to spare the bullpen.

“So composed as a true freshman,” Bianco said of Pagnozzi. “When you look at the radar, it’s not blowing you away, but because he really pitches, he can really locate. It makes it so difficult on the offense. He gets us to the seventh inning tonight and just proud of him.”

After giving up his second hit of the game with a one-out single in the seventh inning, junior left-hander Brian Browning entered the game for his third appearance of the season. The Alabama native from nearby Homewood was shaky and allowed a run to be scored, which Pagnozzi was responsible for, causing him to last just one out before David Parkinson relieved him.

Parkinson got out of a two-out jam with runners at the corners for UAB (6-10) in the home half of the seventh.

Ole Miss concluded the two-game series today at 11:30 a.m. before heading to Knoxville, Tennessee, to open up Southeastern Conference play this weekend.