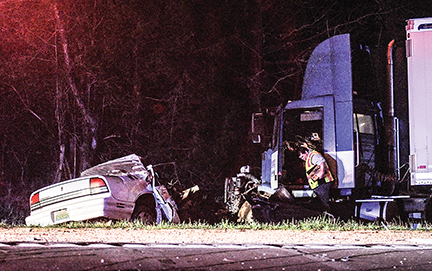 A local man was killed Wednesday night on Highway 7 South after his vehicle collided with two vehicles, one being an 18-wheeler.

The Mississippi Highway Patrol reported that at about 9:20 p.m., Doris Holmes of Water Valley was traveling north on Highway 7 when Corey Williams, 38, was traveling south in a 1998 Toyota and he entered the northbound land for unknown reasons and struck Holmes’ vehicle.

A third vehicle, an 18-wheeler driven by Robert Sellers of Grenada, also was traveling north on Highway 7 and collided with Williams’ vehicle as a result of the initial impact with Holmes.

Holmes and Sellers were uninjured in the wreck.

The wreck is under investigation.