OUT OF WHACK: Chargers struggle in all facets in loss to South Panola 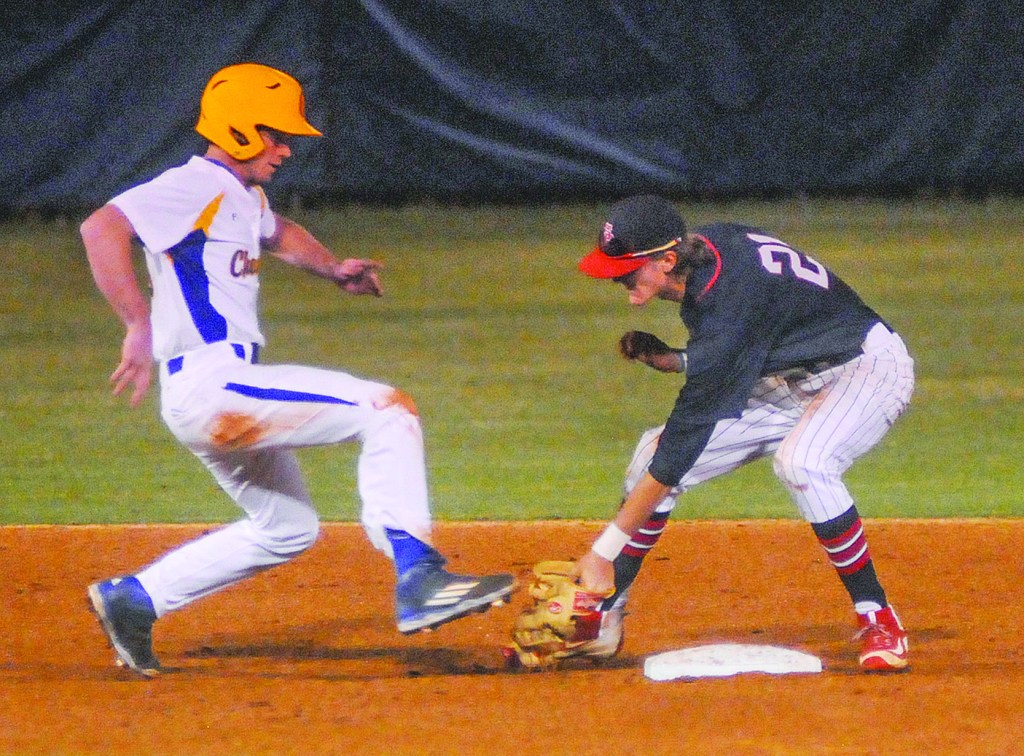 Oxford’s Duncan Graeber, left, goes back to second base as South Panola shortstop Mason Wilkerson tries to apply a tag before dropping the ball during Wednesday’s game in the Oxford Spring Break Tournament at Edwin Moak Field. The Chargers dropped their fourth game this season with a 5-3 loss.

Four stats were fresh on the mind of Oxford baseball coach Chris Baughman, and none of them were good.

Oxford lost its first home game in nearly two years with a 5-3 setback to South Panola on Wednesday in the Oxford Spring Break Tournament at Edwin Moak Field. Gazing at the scoreboard afterward, Baughman rattled off the numbers that made it hard to believe the Chargers were in the game at all.

“Two hits on the board, three errors, six walks, and one hit by pitch,” Baughman said. “We didn’t deserve to win it. We didn’t play well enough to win it.”

Three of those walks came around to score while one of those errors led to another run for South Panola (4-6). Oxford didn’t have any hits through the first four innings as the Chargers spent most of the night hitting lazy fly balls against South Panola’s Chase Durham, who worked around nine walks to go the distance for the win.

The Chargers (8-4) also weren’t at full strength with right-hander Houston Roth, who was originally scheduled to get the ball, relegated to pinch-hitting duties after complaining of lingering soreness following the Chargers’ play in last weekend’s Perfect Game Showcase in Atlanta. Drew Bianco got his second career start on the mound in Roth’s place and scattered four hits and allowed four earned runs in 5.1 innings but walked five in the loss.

“Couldn’t throw,” Baughman said of Roth. “I could’ve put him in right (field), but I didn’t want to take a chance there. I didn’t want to chance him getting hurt with division play coming up next week.”

Still, Oxford had its chances.

Duncan Graeber and Roth worked walks in the fifth and came around to score on Grae Kessinger’s RBI single and Bianco’s sac fly to tie the game at 2. Thomas Dillard followed with a single to right to drive Kessinger in to give the Chargers a one-run lead.

A leadoff single to Zach Hopper in the sixth and a one-out walk to Nathan Herron ended Bianco’s night. Graeber walked the only batter he faced in relief, Dillard’s bases-loaded throw to first on a pickoff attempt went into right field to allow a run to score, and Cole Rotenberry greeted Kessinger with a two-run double to put the Tigers back in front.

Korbin Harmon, Kessinger and Bianco worked walks against a laboring Durham in the bottom of the seventh to load the bases with one out for Dillard, but Dillard chopped one to first at Hopper, who stepped on the bag and threw home for the game-ending double play to hand the defending Class 5A state champs their fourth loss in their first 12 games and their first on their home field since a season-ending loss to New Hope in the North Half finals in May 2014.

“We’re not playing very well right now, and I’ll take full responsibility for it,” Baughman said. “It’s my fault. It’s completely my fault. I’ll see what I can do to change and make better.”