Phillips Grocery is still a favorite among college kids 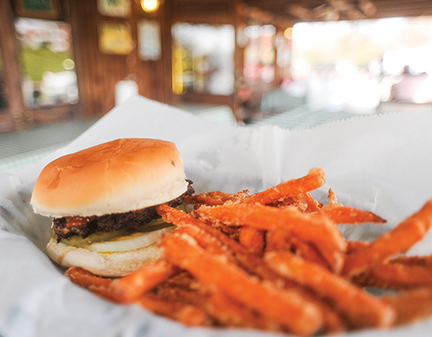 Bruce Newman Phillips Grocery is known for its hamburgers and sweet potato fries.

When you enter Phillips Grocery on South Lamar, the aroma of Southern fried food fills the room.

Listen carefully, and you can hear the oil pop as the regular and sweet potato fries sizzle.

What regulars enjoy with those sweet potato fries is the mushroom and Swiss burger — a greasy, savory meal cooked to perfection with sautéed mushrooms and a large piece of melted Swiss cheese. Most pair the meal with a large glass of super sweet tea.

The restaurant also is known for its catfish. The crispy breading makes for a warm treat, especially when paired with hush puppies.

“I don’t get to eat there as much as I would like to,” Johnson said. “I love the environment. Every time I’ve been, there is a decent amount of customers, but the rustic feel is peaceful. Plus, I love sitting on the front porch when it’s warm outside.”

The restaurant has a classic look with wood floors and walls covered in Mississippi collectibles. The tables and chairs look like those you’d find in a diner. They also have a television in the corner so customers can watch the latest happenings or games on the SEC Network.

The outside of the restaurant looks like an old house or wooden convenience store.

The front porch is lined with picnic tables with green and white-checkered tablecloths. The front door to the restaurant, as well as the windows, has old tin signs with Southern sayings, as well as a big, lighted “Open” sign.

Inside, the menu is written on a white board above the cash register. There is a soda machine, sweet tea pitchers and a create-your-own ice cream cone machine.

There’s also an old gumball machine waiting for the next kid with 25 cents. The walls are covered in Ole Miss posters, trinkets and other memorabilia. There are rows of license plates across the ceiling beams. The wooden tables are covered with navy tablecloths, accompanied with black chairs.

The original building was constructed in Holly Springs and operated in 1892 by Oliver Quiggins, a former Confederate soldier and prisoner of war of the Union Army. It was first operated as a saloon during prohibition and later became a grocery store. Mr. and Mrs. W. L. Phillips bought the store in 1948, and eventually one opened in Oxford.

Phillips was recently named No. 1 restaurant in Oxford by Channel 5’s Andy Wise, No. 1 burger in Oxford by The Oxford EAGLE and was named among the top five burgers in the state by Mississippi Magazine.

Employees follow the restaurant’s mission statement, “to pride themselves on offering quality food along with quality service.”

Ole Miss freshman and Olive Branch native Eli Martin said Phillips has one of the best burgers he’s ever eaten.

“They consistently make them good, and the taste is savory,” he said. “Talking about it makes me want to go eat there.”