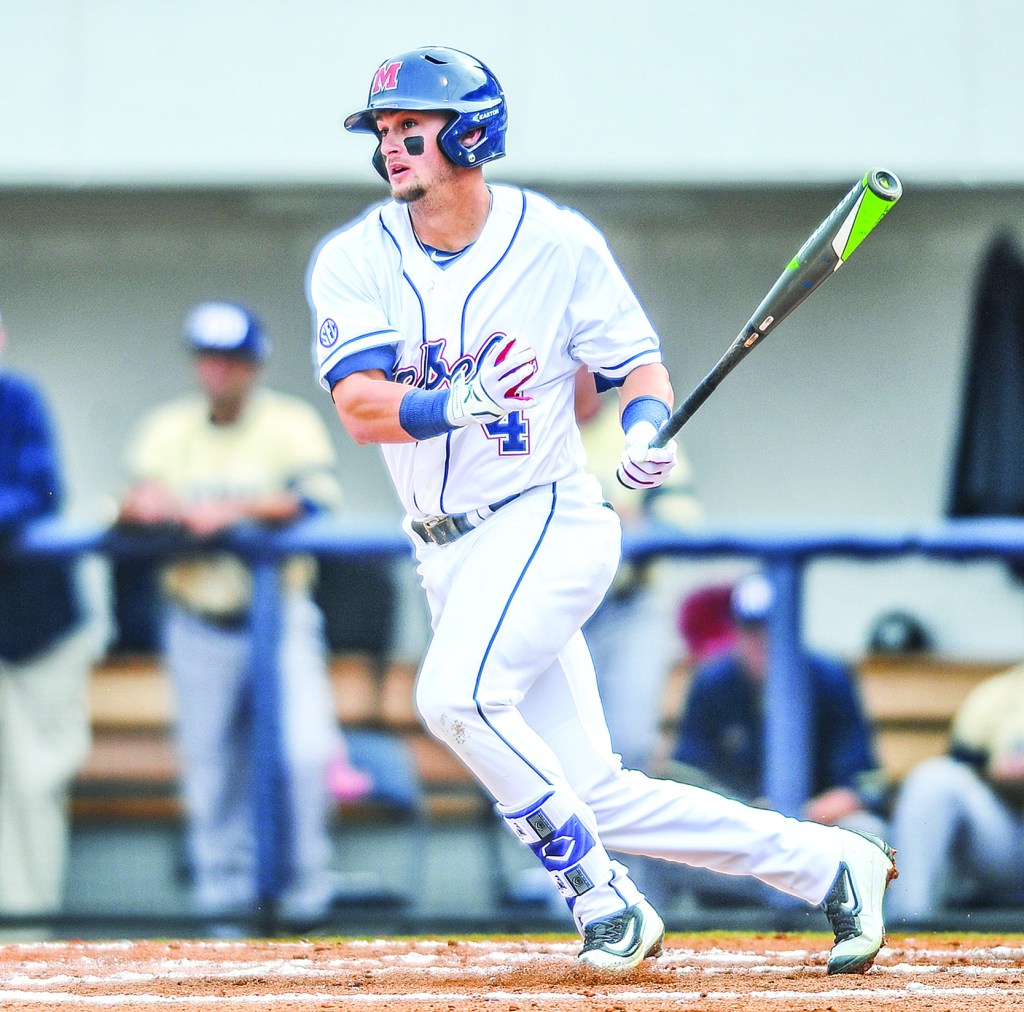 Ole Miss’ Tate Blackman, above, leads the Rebels with a .350 batting average as they begin their SEC slate against Tennessee tonight.

The bulk of the non-conference slate is complete and 18 games are in the books for the Ole Miss baseball team. When the season started a month ago, the Rebels were looking to erase the memory of their quick trip to Los Angeles and their 0-2 showing in the UCLA Regional.

They have done just that as Ole Miss is off to its best start in three seasons at 17-1 and has won two more non-conference games than it did all of last season (15-14).

Now the 12th-ranked Rebels find themselves firmly inside the top 15 of every major poll heading into the start of their Southeastern Conference slate beginning tonight at Tennessee (6 p.m., SEC Network+).

The message by head coach Mike Bianco to his team has been to progress every day, and with four weeks of results to look at, the progression is there.

“We’re a different team,” Bianco said of what his team looks like now compared to before the season began. “I think everybody would admit that from the media to the players on the field. We’re a better team than we were. The good news is I don’t think we’ve played our best baseball. It’s not like we played lights out and the other teams played bad. I think we’ve been challenged. We’ve been in games where we fell behind and been able to come back. We’ve been in games where we’ve handled the lead the whole time. We’ve learned to do some different things.”

Ole Miss is coming off its fifth series win of the season, a midweek sweep over UAB, and carry a 12-game winning into Knoxville, Tennessee, this weekend.

Injured Vols
Taking the first SEC series of the season was going to be a tough feat to do with the dominant pitching and the offensive capability that Tennessee (11-5) has on its roster. The task will still be difficult, but the Volunteers will not have some of their key bullets in the chamber when the two teams toe the rubber tonight. Tenneseee ace Kyle Serrano is out for the year after suffering an injury to his ulnar collateral ligament (UCL) in the elbow of his throwing arm, which required Tommy John surgery.

The junior right-hander only lasted one outing this season, giving up five runs on three hits while walking four in 3.2 innings of work in a 13-8 loss to Memphis in the season opener. Taking his place tonight will be sophomore left-hander Zach Warren, who has a 4-0 record and a 1.59 earned run average. Junior righty Hunter Martin Jr., who is 2-0 and has a 1.17 ERA, will take the bump Saturday.

The pitching mound is not the only place Tennessee has been bitten by the injury bug as the Vols announced on Wednesday that top hitter Jeff Moburg was shut down for the season due to an ACL injury. Moburg had been hitting a team-leading .415 and recorded five runs batted in.

That does not mean Tennessee’s offense has lost all its power as Moburg was the fifth-best hitter in terms of offensive production. Jordan Rodgers leads the team with 31 RBIs, hitting .333 (20 of 60), while Nick Senzel is close behind with 25. The Volunteers are not a long-ball team as they have only recorded six home runs in 16 games with Vincent Jackson leading with three.

“Probably the best offense that we’ve faced to this point,” Bianco said of Tennessee’s bats. “We call it a hostile environment, an SEC-type of environment. A Friday night team that’s been playing really well. I think Senzel and some other guys in the line up, they’ve put together a really nice year so far.”

OUT OF WHACK: Chargers struggle in all facets in…