Dodo Pizza believes they can-do in the U.S. 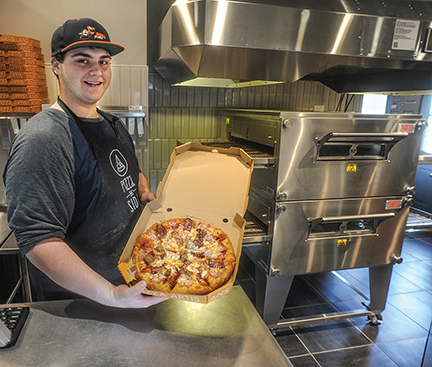 Oxford is known for attracting folks from all over the world, but now you can add an internationally-based pizza franchise to the menu.

Dodo Pizza, which was founded in Syktyvka, Russia, by Fedor Ovchinnikov, recently opened its first store in the United States just blocks off the Square.

It’s the first of what Ovchinnikov hopes is many more in the U.S.

“Our goal in the U.S. is simple and really ambitious,” Ovchinnikov said. “We want to open 400 restaurants under the Dodo Pizza brand in the U.S. in the next seven

years and build a profitable business that will make at least $300 million in revenue a year.”

But why start a pizza empire in Oxford?

“If we can win Oxford, we can win the country,” Ovchinnikov said. “It will be a test for our business model because the town is relatively small and our main

competitors (Papa John’s and Domino’s) are already there.”

The Oxford store launched earlier this month by giving away 500 pizzas. He said the response was overwhelming, despite the fact you can’t order a pizza by

A pizza can be ordered by visiting www.dodopizza.com/oxford and can be picked up or delivered from the store at 614 Jackson Ave.