Harmontown EMRs help one person at a time 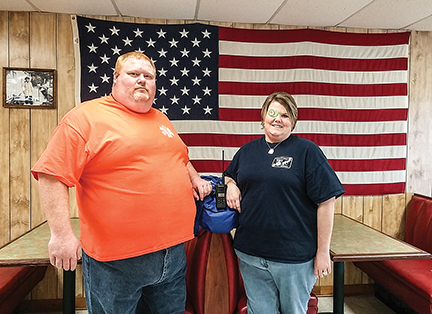 Stephanie Rebman Greg and Heather Campbell are ready with their EMR medical supply bag in the Harmontown Volunteer Fire Department. They are two of the community’s EMRs and are taking a break after an incident where Greg had to use his first-responder skills to save Heather’s life.

It was the training Greg Campbell received as an emergency medical responder for the Harmontown community that helped him save his wife Heather’s life in a recent car crash.

That training also helped Harmontown’s EMRs save one of their own who had a heart attack while fighting a fire.

A team of three EMRs, volunteering at an Ole Miss game, saved a man from choking to death so he could continue watching the game.

The list of saves is lengthy for the community in the northern end of Lafayette County. Harmontown’s EMR group, at its largest point, was close to 50 members strong. While only about a dozen respond to calls now, they still are operating with the same mission of saving lives before the ambulance in Oxford can arrive, a 35-minute trek.

Greg Campbell served on a search and rescue team while living in Cleveland and when he moved to Harmontown in 1999, it didn’t take long for him to get involved. He’s been an EMR for 12 years in Harmontown, responding to anything from a big toe hurting, to an elderly resident who can’t get up, to a large crash.

“I got into firefighting and EMS to help the community and be able to help others,” he said. “It’s been a passion of mine since I was a teenager. I didn’t look for the pat on the back, it was to help one in need.”

Heather Campbell, originally from Meridian, has been responding for nine years ever since she moved to Harmontown to marry Greg. She started watching from a distance when he went on calls and decided to get on board.

“I just saw how this EMS and fire department were the center of the community and when something was wrong this is who would go and take care of it, whether it was a fire or a wreck,” she said. “Even if there was something minor, this is who they trusted to call. From my first call I’ve loved it ever since. You do have to have a heart for it. It’s not something you can do just to do.”

For them, knowing what to do in an emergency paid off when the 39-year-old pair were traveling between Harmontown and Como in August and were right outside Lafayette County.

Greg was driving and the vehicle hit a concrete culvert.

“Without my training I wouldn’t have known what steps to take next or what to look for,” he said. “I immediately, as soon as the impact was over, did a mental evaluation of myself, made sure nothing was broken. Once I did the evaluation of myself, I looked at her, saw that she was hurt worse than I was. I turned to look at my 2-year-old and he’s looking at me like, ‘what happened?’ and I looked at my 18-year-old, who was sitting behind me and asked him if he was OK and told him to go ahead and get out of the car because I could smell something and I wasn’t sure what it was.

“I focused my attention on her, and she had blood coming from her right ear, so I knew she had head trauma. That’s the first sign of head trauma, when you have fluids coming from your ear. Whenever the deputy got on scene, I told him to get a helicopter en route.”

Luckily for them, a firefighter happened to be traveling a short distance behind them. A deputy was on scene in less than five minutes. About 15 minutes after the wreck, there were two ambulances and a helicopter on the side of the road.

“He was hurt too,” Heather said. “He had hit the windshield and had a big ol’ gash in his head, so he wasn’t even worried about himself. I don’t even remember any of it. I just remember what he told me. Not only was he hurt, but he was having to take care of me and my boys. He shouldn’t have been moving around because of neck trauma he could have had, but he was taking care of us.”

Heather had to be airlifted out.

Heather wound up with head trauma, broken ribs and had to have a hip replacement and reconstruction.

The couple is not working or responding to calls while Heather recovers, which has been an ongoing process, but they are eager to get back to helping people. When they do, they will help round out the team that is now mostly responding to incidents after the 9 to 5 daily grind.

Currently, one woman who works with elderly residents during the day in Harmontown is going through the first responder course to get certified and will help round out the team.

“She will be a great asset to us, especially during the day,” Heather said.

One Harmontown resident would have died from a heart attack if Greg hadn’t been there, and she mentions it and how grateful she is every time she sees him.

Heather said it’s the mix of gratefulness and service to others that brings the community together, because sometimes as an EMR you’re being of more help than you can imagine just sitting with someone during a hard time.

“Sometimes the people in the community will come up to me and say thank you for helping me with my dad or thank you for sitting with me while my husband was having a diabetic attack,” she said.

The EMRs constantly train and hold meetings and continue building relationships with other responders in the county. Greg said the Harmontown EMRs have a solid working relationship with the ambulance crews and other emergency responders, and because of that, when they know a helicopter is needed, it will often be sent right away without an ambulance crew’s arrival to assess.

It takes about 10 minutes for an ambulance to arrive from Oxford, and if one cannot travel from there due to weather, Batesville and Tupelo also send helicopters. If ambulances are all taken up in Oxford, it also takes about 30 to 35 minutes for one to come from Sardis, Senatobia or Holly Springs.

Lonnie Weaver, 58, is a Harmontown EMR and said that good rapport with the paramedics, especially in Oxford, has saved a lot of lives. Thanks to his paramedic background, he taught the initial classes in the 1970s to help get Harmontown’s EMRs up and running.

“These people deserve the help,” he said. “We’re so far away from any help at all, that’s the main need of EMRs over here. Minutes and second count in a life situation, and we’ve had several instances where its paid off for the EMRs.”

Weaver has lived in Lafayette County since 1973 and has been serving the community in a medical role since 1976.

“My thing was to always give back to the community and I’ve always enjoyed helping people,” he said, “being in a position to help somebody.”

Currently, he estimated Harmontown EMRs respond to about 80 calls a year.

“It takes a heart and nowadays it’s getting more and more dangerous to respond to these calls because you never know what’s going on and what’s somebody’s state of mind,” he said. “I think the ones that do do it get a benefit from it. They’re not out there for the glory or running all the red lights and sirens. It’s the part of being able to know you provided some kind of care that made a person’s life different until an ambulance got there and got them to the hospital.”

Glenda Hardwick also has been with the group since the start, right at the side of her husband, Rex, who helped get the group off the ground in the late 1970s.

Rex died in October, and Hardwick, 67, is currently unable to respond to calls anymore due to health woes. But she is proud of all the lives that have been saved since the effort began and tears up with pride in the fact Harmontown residents are carrying on her husband’s legacy.

Hardwick was already a nurse, so she learned how to do things in the field like put splints on broken bones, bandage breaks and more. Being on Sardis Lake, the group often responds to boating accidents with propellers and does all it can to ensure good outcomes.

“The patient would be packaged and ready to go on the ambulance and back to Oxford in a timely manner because seconds count,” she said. “It doesn’t always have a good outcome, but we try to increase their chances.”

Hardwick said toward the beginning the initial group of EMRs saved about five or six people, and one of the first was one of their own EMRs, J.T. McPherson.

“The first person we saved with a defibrillator was one of our own firemen,” she said. “He had a cardiac arrest after a big fire in Harmontown. We called 911, started CPR on him, put the defibrillator on him and shocked him back to life and he lived for four more years. He just happened to be in the firehouse where the defibrillator was. If we had to travel five miles, he might not have made it.”

A recent lifesaving measure was when EMRs were volunteering at a baseball game. A judge was choking on a hamburger, so three EMRs did the Heimlich maneuver and the judge returned to the field the very next day. It’s helping save a life and simply being thanked is what Hardwick finds the most rewarding.

“For me it’s when a family member tells you how much they appreciate what they did or you saved their loved one,” she said. “That’s very rewarding.”

Since her husband’s death, Hardwick has been spending a lot of time with her daughter in Memphis and is proud of the volunteers who are taking the reins back home.

“We have a good group in Harmontown,” she said. “I’m just proud that since Rex’s death that people are still responding. I talk to people and they tell me about calls they’ve been on. We’re just glad that everybody’s still responding and helping people.”

Spring time on the Square