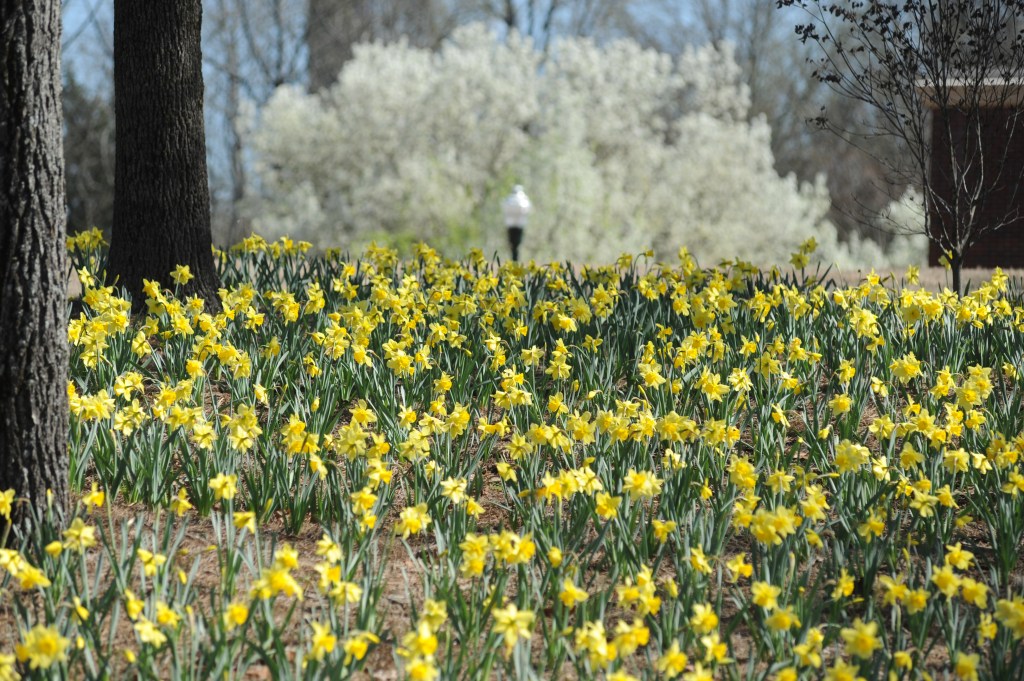 Each season has its own way to announce its arrival in Oxford. Summer comes in with blazing sunshine. In the fall, leaves change their colors, creating a bright canvas across the sky until they begin to fall off as winter approaches. The sky turns gray and sometimes, there’s snow and ice falling on the bare tree limbs.

There are several signs that spring is about to arrive but none so obvious as the blooming of thousands of daffodils around Oxford. Each year, the city of Oxford’s Building and Grounds department plants thousands of bulbs in the later fall months.

“It depends on how much rain we get,” said Billy Lamb, superintendent. “Usually we plant the bulbs in November.” Lamb said each year the number of bulbs planted varies.

The effort to create the yellow sea of daffodils started about 10 years ago with the help of the Oxford Garden Club. Since then, some service groups, like the Boy and Girl Scouts often help plant the bulbs — and even help raise the funds to buy them as part of their Eagle Scout projects. While some areas covered in the white and yellow flowers seem to make sense or appear to have been planted with purpose, many patches of daffodils can be found in the oddest of places — empty lots, on the side of a parking lot, alongside a small street or in the corner of someone’s backyard.

Master Gardener Dianne Fergusson said daffodils are not native to Mississippi so when you see them in odd places, it’s usually because there may have been a home there at one time.

“You see that a lot out in the county where there used to be small houses or farms with multiple buildingsthat have now been turned into roads or developments,” she said.

Daffodils don’t “travel” she said, like the rain lilies that bloom in August.

“They do multiply, however, and if someone planted a bulb 20 years ago, and it’s never been disturbed, there could be a dozen or so there now,” she said. “When they get that crowded and settled, they usually just make a greenery that you see without the blooms.”

Every few years, Fergusson said those clumps should be taken up and divided to keep them blooming.