Rebels getting glimpse into future at QB 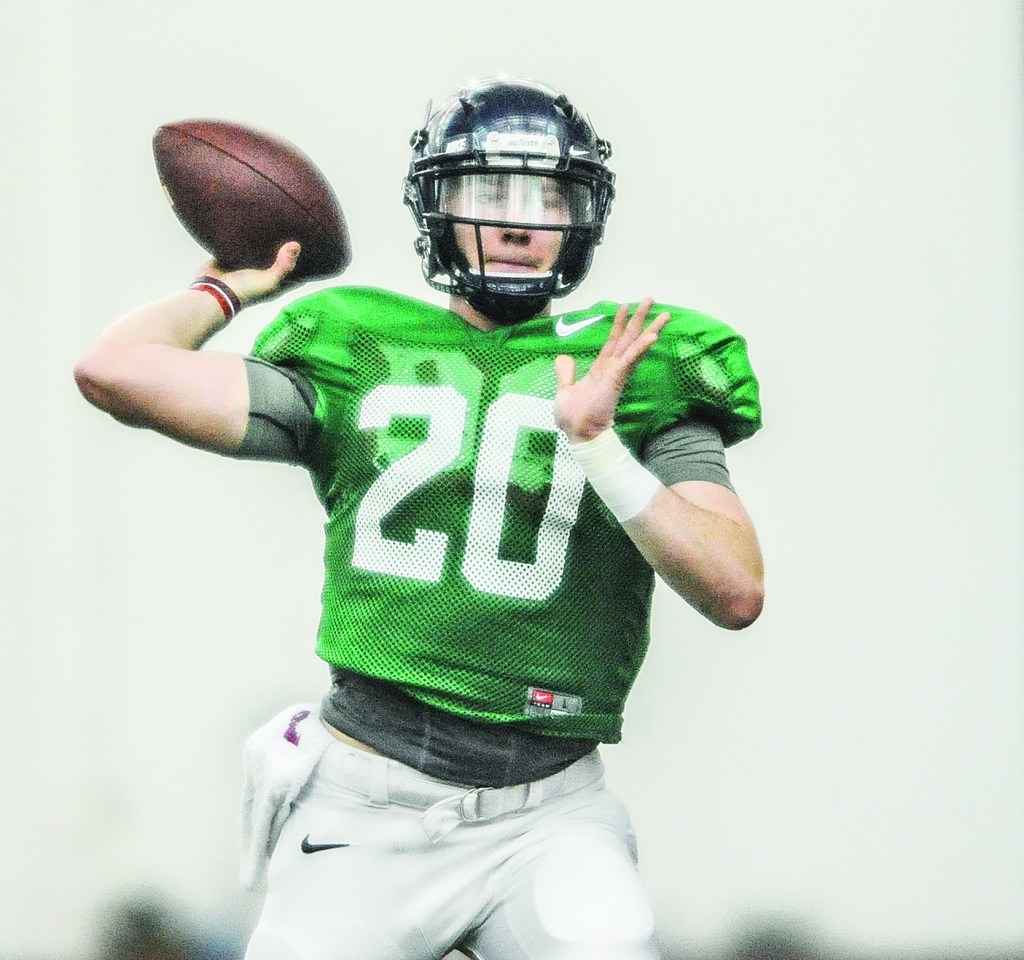 Ole Miss has its quarterback now, but the Rebels are getting a glimpse into their future at the position this spring.

With DeVante Kincade (transfer) and Ryan Buchanan (quitting football) no longer around, Jason Pellerin and Shea Patterson are next in line behind rising senior Chad Kelly. The freshmen signal callers have been under the watchful eye of head coach Hugh Freeze and quarterbacks coach Dan Werner this spring and even got all the reps in a weekend practice before the team split for spring break with Kelly being held out.

The early reviews have been as expected for freshmen.

“Pleased,” Freeze said. “Shea’s not a normal freshman. He’s got a good understanding of the game, but there’s still times that it moves a little fast for him because everything’s new. You’re installing stuff each day. Jason’s very athletic and big and strong.”

As a redshirt, Pellerin has a year’s worth of experience in the playbook after signing with the Rebels out of New Iberia Catholic (Louisiana) last February. Pellerin said he was “grateful” for the redshirt year having to adjust from an option offense in high school to the Rebels’ spread attack.

“Coming from the offense I came in, switching back to the spread, I felt it was a great opportunity for me just to learn this year,” Pellerin said. “Get better, learn the offense, so spring came around, and I know the plays a lot better than when I first got here.”

“He’s got a tremendously strong arm,” Freeze said. “Love him as a runner. His footwork, there’s times that pressure’s around and he gets a little sloppy with that. That’s not abnormal for a young kid.”

Patterson joined the mix as an early enrollee after inking with Ole Miss this year amidst much fanfare. Patterson, a five-star recruit, was ranked by a majority of the recruiting services as the nation’s top quarterback prospect and capped his prep career by being named MVP of the U.S. Army All-American Bowl.

A quick release and pinpoint accuracy are strengths for Patterson, and his ability to take command of the offense at a young age has also stood out for the coaches in the short time they’ve had to see him work. But whether Patterson actually plays this fall is a decision that’s a long way off.

“I know that he is really, really good,” Freeze said. “I love his demeanor. I love his leadership qualities. He gets the game. It’s not too fast for him. He doesn’t even know our terminology yet, but he still has an understanding of how the game goes. But it’s way too early to tell.”

Familiar competition
So the competition will continue between the heralded recruit and another that wasn’t so much, one that’s been going on since their high school days in Louisiana. Pellerin’s team squared off against Patterson’s Calvary Baptist Academy squad twice in the playoffs with Patterson’s team winning both times.

“For me, I don’t blame the media for not really knowing who I am, the fans or anything,” Pellerin said. “I came from a Wing-T offense. It really doesn’t affect me. I’m glad to have (Patterson) here. … When we get on the field though, it’s competition. Outside of that, we’re great.”

Come this fall, one of them will be just a snap away.

“We’re going to play the ones that help us win for sure, and you never know how injuries are going to factor into that,” Freeze said.”