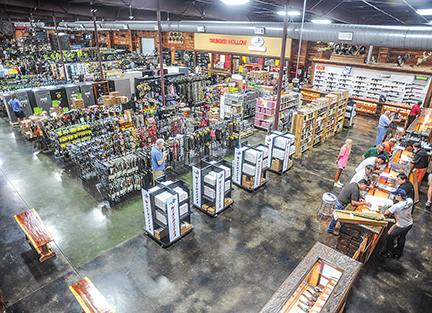 Hunters' Hollow is one business grateful for the state's new tax cuts.

A Senate bill was signed in to law Monday that establishes a state fund for workforce training programs and also helps employers save money with a lowered unemployment tax rate.

Gov. Phil Bryant signed Senate Bill 2808, which creates the Mississippi Works Fund that will support programs run mostly out of community colleges. The fund was created out of a surplus in the state’s unemployment compensation fund. It will start off with $10 million in its first year. Seventy-five percent of the money will go toward new job creation.

The bill also cuts the minimum unemployment tax rate that employers pay to zero percent. The cut could save businesses up to $195 million over the next decade, according to Lt. Gov. Tate Reeves.

“I am hopeful this is only the beginning when it comes to providing meaningful tax relief to individuals and Mississippi-grown companies this session,” Reeves said. “As a Republican, I believe the state’s fiscal policy should encourage investment and long-term economic growth, and we do that by allowing the taxpayer to keep more of their hard-earned dollars.”

Currently, employers must pay unemployment insurance taxes on a portion of employee wages. Statutorily, the tax rate is between 0.2 percent to 5.4 percent depending on economic activity, such as layoffs or job growth. Under Senate Bill 2808, the minimum tax rate drops to 0.0 percent. The Unemployment Insurance Trust Fund is actuarially sound, which allows the employers’ tax rate to be lowered, Reeves said.

Jon Maynard, president and CEO of the Oxford-Lafayette County Economic Development Foundation and Chamber of Commerce, said this tax cut is good for local businesses, especially since the bulk of employers in the state paying the tax are small businesses in small communities.

“The tax dollars that are diverted from state government and back into the pockets of those paying the taxes is a win at the local level,” Maynard said. “Granted, the state of Mississippi has some very large budget holes to repair, but in the long run this will create a more sustainable state budget.”

In addition to creating a more appropriate budget, Maynard said this should inspire people to shop locally and benefit the community.

“Shopping locally means that you are employing local people, and you are putting money into the local economy to pay for schools and public services,” he said. “Local spending tends to drive a local economy. The state of Mississippi has, through this legislation, committed to improving local economies by reducing the overall cost of doing business in Mississippi.”

Maynard said the benefits will be plentiful and Donny Guest, owner of Hunters’ Hollow, agreed.

“Any tax cut to small businesses is a huge benefit to our survival,” Guest said. “I appreciate what is being done to help small businesses, but many more tax breaks need to be applied as well, such as addressing what can be done to offset the cost of health insurance for small business employees.”

Richard Howorth, owner of Square Books, also echoed Guest in hopes that the state would do more, and possibly make different cuts.

“I believe that the adequate funding of education would do more to help my business than this proposed cut, and I know that requiring Amazon and other online businesses to collect and pay sales tax, as most other states have required, and which is worth over $700 million to Mississippi, would do more to help Mississippi, communities like Oxford, and privately owned businesses such as ours,” he said. “The legislature should get down to the real business of helping Mississippi instead of this sort of window-dressing legislation.”