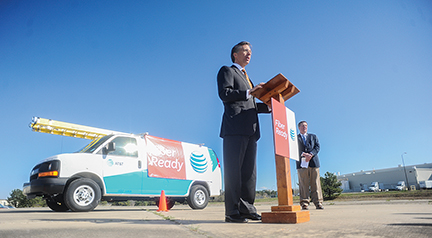 The Max D. Hipp Lafayette County Industrial Park is one of two in Mississippi that has been certified by AT&T as fiber ready — a designation that economic development leaders hope will help attract new industries to the park and create more jobs in Lafayette County.

On Monday, city, county and AT&T officials gath- ered inside the park to make the formal announcement. The park is home to Caterpillar, SWM Company, Elliot Lumber Co., Winchester Rim Fire and Center Fire, Ability Works and more. There are currently 250 acres open for future businesses.

Having the new AT&T Fiber Ready designation is another way to market the park to industries all over the world, said AT&T Mississippi President Mayo Flynt.

“It’s a proactive step to marketing the park by allowing them to use our brand and our name to show that the park is equipped with high-speed data infrastructure,” Flynt said.

Flynt, a University of Mississippi graduate, lived in Oxford as a child and his parents currently still live in Oxford. He said his ties to Oxford and Lafayette County made him especially excited to work with the city and the county in having the industrial park receive the Fiber Ready designation, which is a new program for AT&T.

The underground fiber for high-speed data transition has been in place for “a while;” however, Flynt said the designation program is another tool for the Oxford and Lafayette County Chamber of Commerce and Economic Development Foundation to market the park by show- ing a true partnership between AT&T and the city and county.

Jon Maynard, president of the chamber and EDF, said he has seen more requests for information from companies recently, asking about the park’s ability to handle high-speed data. “Data infrastructure has become just as important as water, roads, electricity and other infrastructure,” he said.

Lafayette County Board of Supervisors President Jeff Busby said the designation would enhance the park’s marketability.

“We look forward to filling the park with potential employers,” he said Monday.

Flynt said AT&T has spent $950 million between 2012 and 2014 to upgrade its technology in Mississippi. “Much of it are things you don’t see,” he said. “Everyone sees cell towers, but it’s the underground infrastructure people don’t see. Today is a celebration in a way, so everyone knows there are fiber optics in the ground, ready and available to this park and its customers now, and potential customers around the world.”

Mayor Pat Patterson said the designation is crucial in bringing industry to the area.

“I’m not going to pretend I understand fiber technology but I do know a little about finance and the economic impact of having a top-tier industrial park,” he said. “It’s a goal everyone can agree on and work toward the benefit of all concerned.”

Portion of shooting range shut down amid concerns