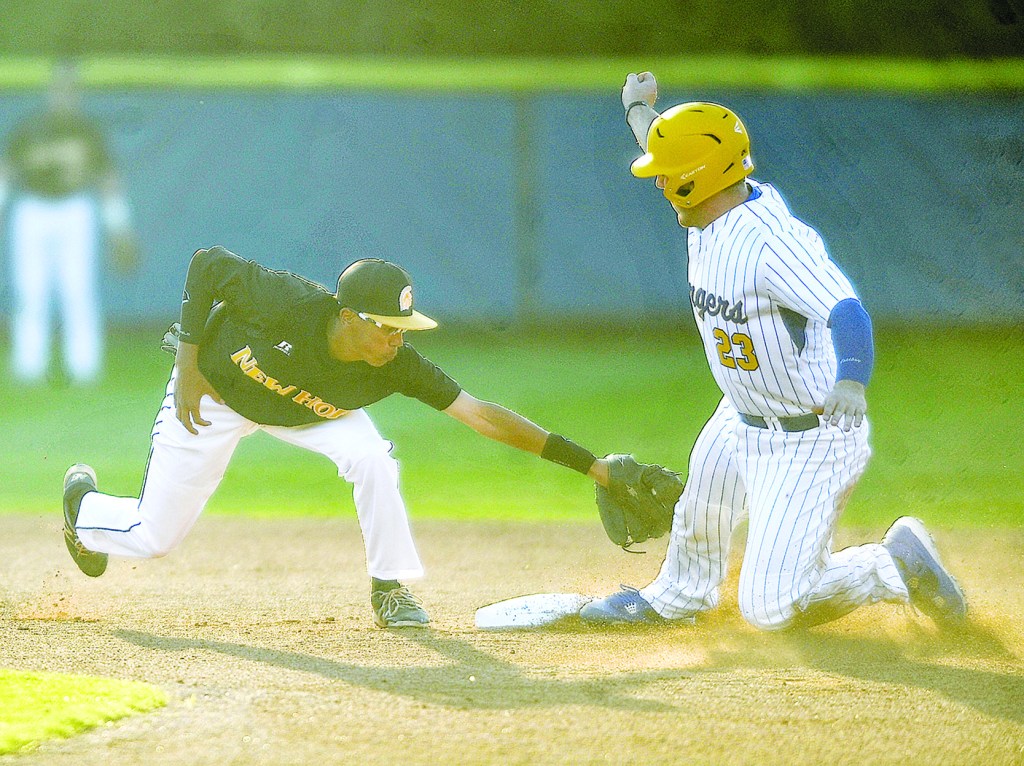 Oxford’s Thomas Dillard (23) steals second ahead of the tag of New Hope’s Koby Harcrow during Tuesday’s Region 2-5A game at Edwin Moak Field. The Chargers won 8-2.

The combination helped the Chargers land the first blow against their region rival.

Oxford started its Region 2-5A slate with an 8-2 win over New Hope on Tuesday at Edwin Moak Field in the first meeting between the teams since last year’s North Half finals. The Chargers have won six of the last seven in the series.

“To me, every region game is important, especially this year,” Oxford coach Chris Baughman said. “Everybody in our division is going to play like they have nothing to lose just like everybody just about we’ve played this year plays that way against us. It’s always good to get the first one.”

Oxford (11-4, 1-0 Region 2-5A) finished with nine hits, most of them coming early in support of Roth, who made his first start in nearly two weeks after skipping his scheduled start against South Panola last Wednesday with lingering arm soreness. The senior right-hander fought his fastball command at times but settled in after giving up a solo homer to Thomas Stevens three batters in to get the complete-game win.

“South Panola, those games matter, but it’s not as big a deal as this one,” Roth said. “I just wanted to have that extra six days to be ready for this one and throw this game.”

Roth (4-0) walked three and hit two batters as New Hope (8-3, 0-1) put the leadoff man on in five innings, but the Ole Miss signee scattered four hits and struck out 15 to work himself out of his own trouble with 12 of those punchouts coming from the third inning on.

“I felt like maybe having the extra week off contributed to a little control (issues),” Baughman said. “He threw more pitches tonight than he normally does, but his slider was real sharp. He had them swinging themselves into the ground like he does. That’s what he does and does it well.”

Fast start
Oxford plated four runs on four hits in the home half of the first against New Hope’s Peyton Buckner to take the lead for good. Drew Bianco highlighted the outburst with a solo shot to erase the Trojans’ early lead while Jason Barber and Preston Perkins each drove in a run in the frame.

New Hope cut into the Chargers’ 6-1 lead in the third when Shay Boyd led off with a single and scored on catcher Thomas Dillard’s errant throw trying to nab him at third. But Roth got some help from his defense to start the fifth when a relay cut down Will Godfrey trying to stretch a double into a triple, and he got pinch-hitter Drew Pounders looking to end the Trojans’ last threat with two out and two on in the sixth.

“My slider, I feel like that’s one of the pitches that’s always there or there most of the time,” Roth said. “I had it tonight, and it was biting hard. I located it really well.”

Roth helped himself with a two-out RBI double in the sixth to end Buckner’s night while Dillard homered for the third straight game with a solo shot earlier in the inning. Dillard finished with three hits while Barber had two RBIs.

Oxford will make the return trip to New Hope on Thursday with first pitch set for 6 p.m.