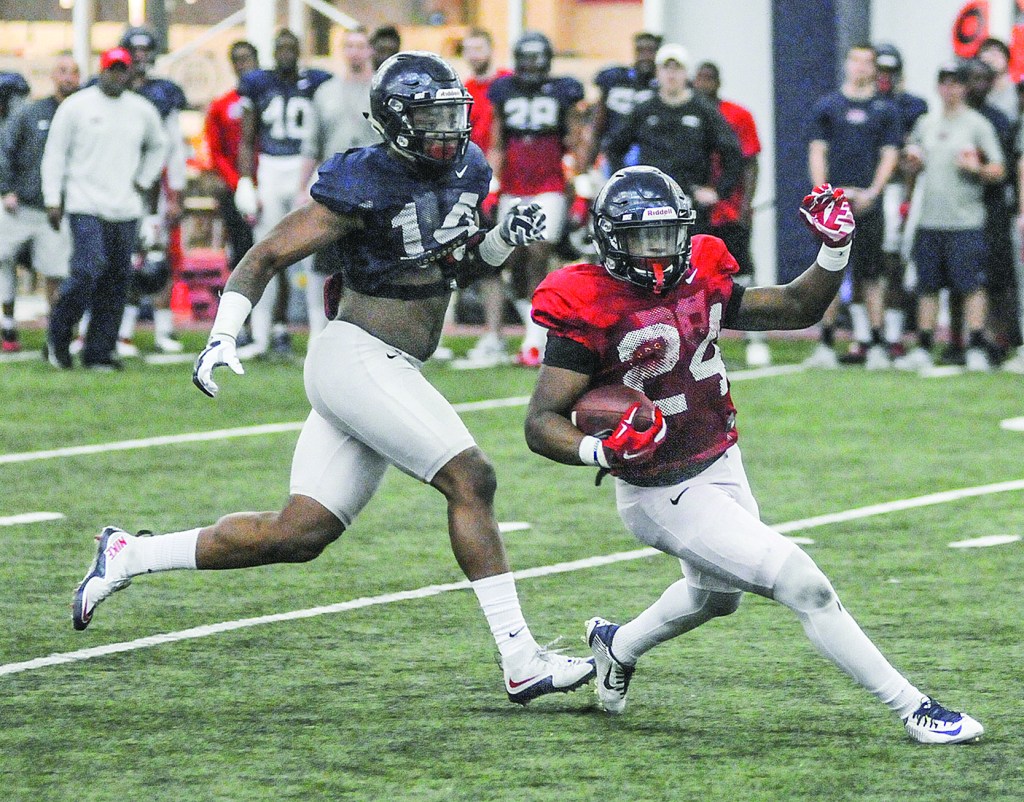 Ole Miss running back Eric Swinney (24) is fully recovered from a broken leg he suffered last summer and is turning heads during spring drills.

Eric Swinney is healthy, and it’s easy to notice this spring.

Ole Miss’ redshirt freshman running back has drawn cheers and gasps from teammates and coaches at times with some of his carries. Some of them have been punctuated with a punishing thud at the end. Other times, Swinney has elected to use his explosion and shiftiness to get by defenders.

Either way, Swinney is finally displaying an array of skills that could make him a significant part of the rotation in the backfield come the fall.

“He looked very good (Monday),” Ole Miss coach Hugh Freeze said. “He hasn’t gotten a ton of carries, but today he looked quick, powerful and strong. He finished runs well. I liked what I saw.”

Freeze has been high on Swinney since signing the former four-star prospect out of Sandy Creek (Georgia) High in 2015, the only running back in the class. But Swinney’s freshman year ended before it began after he suffered a stress fracture in his leg during the summer that required surgery.

Swinney was cleared for full contact during the second week of spring drills, adding another 200-plus pound back to a group that will be bulkier next season after losing the speedy Jaylen Walton to graduation. Senior Akeem Judd (222 pounds) and juniors Jordan Wilkins (214) and Eugene Brazley (189) are back, but the 5-foot-10 Swinney has quickly made an impression.

“He seems to finish runs with a certain amount of authority for sure that we might not have seen so much of in the past,” Freeze said.

During one run Monday — the only practice members of the media have been allowed to watch this week — Swinney broke into the secondary and lowered his head at the end to drive through a host of defenders for a few extra yards.

“I think he brings a little bit of everything. He brings the whole thing,” quarterback Chad Kelly said. “He’s not scared to lay his head down and run someone over, and at the same time, he’s not scared to juke someone.”

Swinney did that later, again busting through a hole into the third level with defensive back Antwain Smith closing in. Instead of lowering his shoulder, Swinney put his foot in the ground and cut to his right to leave Smith grasping at air, a move that drew oohs and ahs from coaches and teammates.

“I noticed that (Monday),” offensive lineman Jordan Sims said. “I saw him get into the secondary and you think, ah, he’s about to run this guy over, and he hit a nice little cut outside and broke free. That definitely surprised me. He’s definitely going to be in the competition for some playing time next year.”

With Walton’s departure leaving the starting job open, Swinney is starting to make his case.

“I’ve always felt like if he gets healthy, he has a chance to be a special kid,” Freeze said.