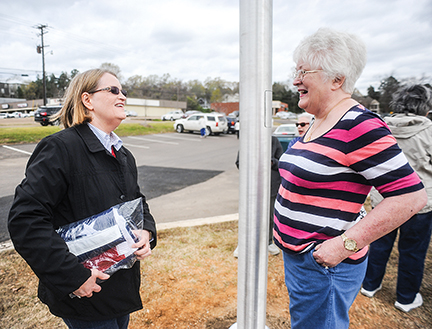 Sally Malone, left, regent for the David Reese chapter of the Daughters of the American Revolution, holds a U.S. flag that will go atop a flag pole the group donated for the Pavilion, while talking with Linda Norwood in Oxford, Miss. on Wednesday, March 23, 2016.

A 32-foot flagpole was erected in front of the new pavilion Wednesday on the corner of Bramlett Boulevard and University Avenue that will soon fly the American flag.

The David Reese chapter of Mississippi Society Daughter of the American Revolution raised $3,000 for the pole and the flag in the last several months as part

of a project to celebrate its 115th anniversary.

The chapter presented the idea to the Oxford Board of Aldermen in November. The city agreed to provide the manpower and materials to install the pole.

Eleven city employees from the Building and Grounds department installed the pole in front of the pavilion as members of the DAR chapter watched and cheered.

“It’s beautiful, isn’t it?” asked DAR member Laurie Triplette once the pole was settled into the ground.

A 6-foot by 10-foot American flag will be placed on the pole, along with a plaque recognizing the donation of the DAR early this summer during a dedication ceremony.

Sally Malone, regent of the local DAR chapter, said the plaque must be approved by the National Daughters of the American Revolution, which is celebrating its 125th anniversary this year, before it can be placed at the base of the flagpole.

The David Reese Chapter was chartered in the fall of 1900 and celebrated its 115th anniversary in October. That’s when the chapter came up with the idea to place the pole, Malone said, as a way to commemorate its anniversary by giving something back to the community.

“This place definitely needed it,” Malone said of the pavilion grounds. “Also, our organization’s main goals are historic preservation, patriotism, education and service to community and veterans.”