NEXT ONE UP: Rebels face another test in No. 18 South Carolina 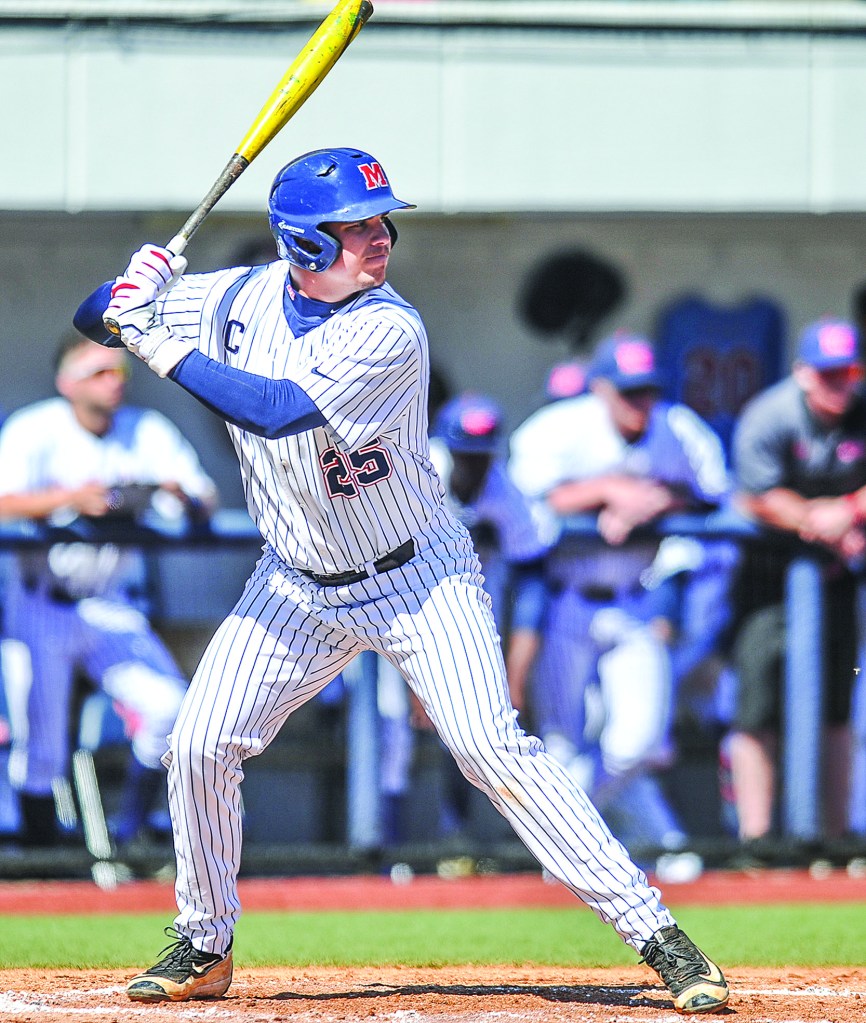 Ole Miss cleanup hitter Colby Bortles (25) is part of a middle of the order that’s coming in hot to this weekend’s series against No. 18 South Carolina. The three-game set will start tonight at 6:30 at Oxford-University Stadium.

After taking a quick dip in non-conference play Tuesday, the Ole Miss baseball team jumps back into its Southeastern Conference schedule 48 hours later as the Rebels welcome another top-20 opponent to Oxford-University Stadium in the form of No. 18 South Carolina.

The three-game series begins tonight at 6:30 p.m. (SEC Network+) and will conclude with a 2 p.m. game Saturday.

The No. 7 Rebels are riding high after claiming their opening SEC series over Tennessee last weekend and defeating UT Martin in their annual School Day game on Tuesday, giving them their best start through the first 22 games of the season in program history with a record of 20-2 (2-1 SEC).

It has been stated the team goal is to get to 40 wins before heading to Hoover, Alabama, for the SEC Tournament. The first half of their goal is complete after reaching 20 wins nearly an entire month earlier than they did last year when Ole Miss claimed its 20th victory of the season on April 18.

It is the second half of that equation that will be the trickiest, and it begins with the first home SEC series of the season against South Carolina (20-2, 3-0), a team that is rolling as well after sweeping Arkansas in its opening SEC matchup last weekend.

Numbers in the middle
Blackman is a part of the middle of the Ole Miss lineup that is starting to figure things out at the plate. Blackman hits behind third baseman Colby Bortles, and the duo combined for two home runs and three RBIs against UT Martin after going 3-for-17 with four RBIs against Tennessee. Catcher Henri Lartigue is the final piece of the middle third of the order and went 5-for-10 against the Volunteers with three RBIs.

“It’s definitely big,” Blackman said of the heart of the order starting to produce. “That’s our role is to hit guys in, and if they’re on base, we’ve got to do what we got to do to get guys over and hit them in. Definitely a good time to start getting our middle guys going, especially with SEC coming around.”

South Carolina is hitting .325 as a team and has already racked up 19 home runs in 22 games. The offense is led by sophomore catcher John Jones, who is hitting .422 (35 of 83) with a team-leading six home runs as well as a team-best 31 RBIs. Behind Jones is junior outfielder Dom Thompson-Williams with a .395 batting average with 20 RBIs. He is tied for second on the team with four home runs along with first baseman and left-handed pitcher Alex Destino.

The Rebels’ weekend rotation, which has not lasted more than six innings in a start this season, will be tested to try and save their bullpen as much as possible. If they are unable to, Brady Bramlett, Chad Smith and Sean Johnson will be turning the ball over to one of the more dominant bullpens in the SEC.

With 22 games under its collective belt, the Ole Miss bullpen has an earned run average of 1.87, led by freshman Andy Pagnozzi, David Parkinson and Brady Feigl just to name a few. Connor Green, Will Stokes and closer Wyatt Short have also been solid, keeping opponents off the scoreboard in the later stages of the game.