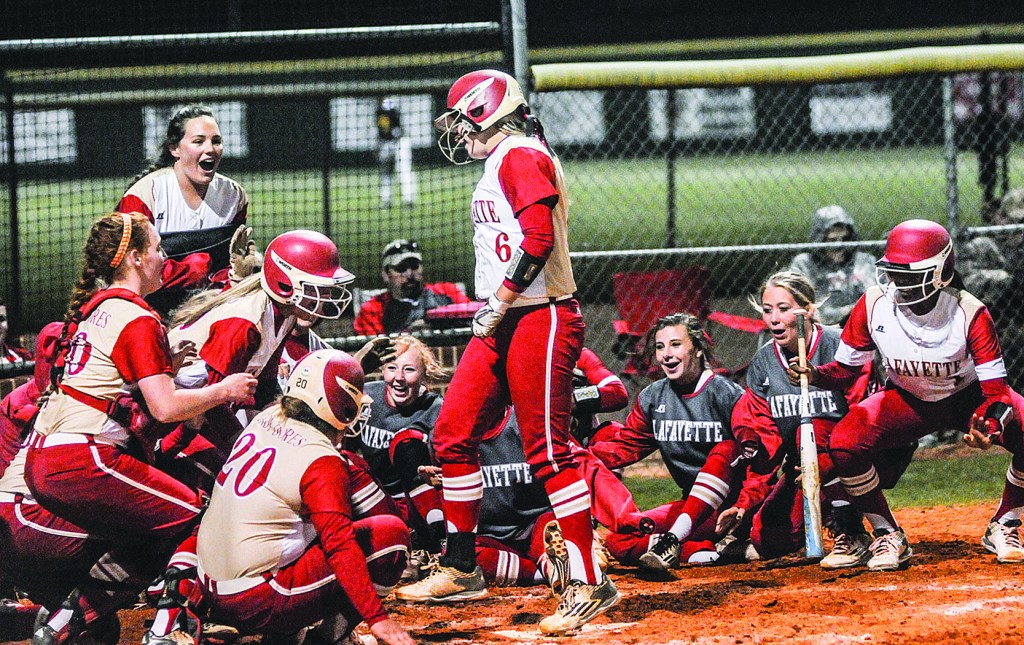 Lafayette’s Emily Robinson (6) is greeted by her teammates at home plate after hitting a home run in the third inning against Byhalia at the Lafayette High softball field on Thursday. The Commodores won 14-3 in five innings.

Katie Jenkins wants more consistency throughout her lineup. Lafayette’s coach hopes Thursday night was a sign the Commodores are getting closer.

Lafayette cranked out 14 hits, including a pair of home runs from shortstop Emily Robinson, to cruise past Byhalia 14-3 in five innings at the LHS softball field. The win got the Commodores back to .500 on the season at 7-7 and evened their Region 2-4A record at 1-1.

“The confidence at the plate,” Jenkins said of what she noticed most during Thursday’s win. “We’re still in a little slump. We hit, but we don’t hit together. That’s what our problem has been. You look at our batting averages and you think, ‘Hey, you know, they’re not a bad hitting team.’ But we haven’t been hitting together.”

That wasn’t a problem against Byhalia.

After stranding Robinson at third to end the first inning, Lafayette left just one runner on base the rest of the night after leaving eight on in its region-opening loss at Senatobia on Tuesday. The runs were in support of Chloe Russell, who allowed two earned runs on six hits while striking out six in 4.2 innings to get the win.

“We’ve had hits and everything, but we haven’t been in that groove of it,” Jenkins said. “I’m glad (Robinson) finally felt it tonight and got in there and got her two home runs.”

Robinson’s first blast came in the third. The senior also added two doubles as part of a 4-for-4 night, drove in four runs and scored three times.

Half of the Commodores’ hits came from two of the top three spots in the order in Robinson and first baseman Hope Patton, who went 3-for-4 with a triple and two RBIs. Cleanup hitter Mariah Holland drove in three runs with an inside-the-park home run while nine-hole hitter Cylie Robertson added a pair of singles and knocked in a run.

“We had a talk where we talked about how we just need to feed off of each other,” Jenkins said. “She got a hit, I need a hit. Or she didn’t get a hit, I’ve got to pick her up. Either way, just have that mentality when they get in the box. I think it’s coming together more now that they see the importance of the next one doing their job.”

Lafayette will take the weekend off before hosting New Albany on Tuesday in another region tilt.

NEXT ONE UP: Rebels face another test in No.…