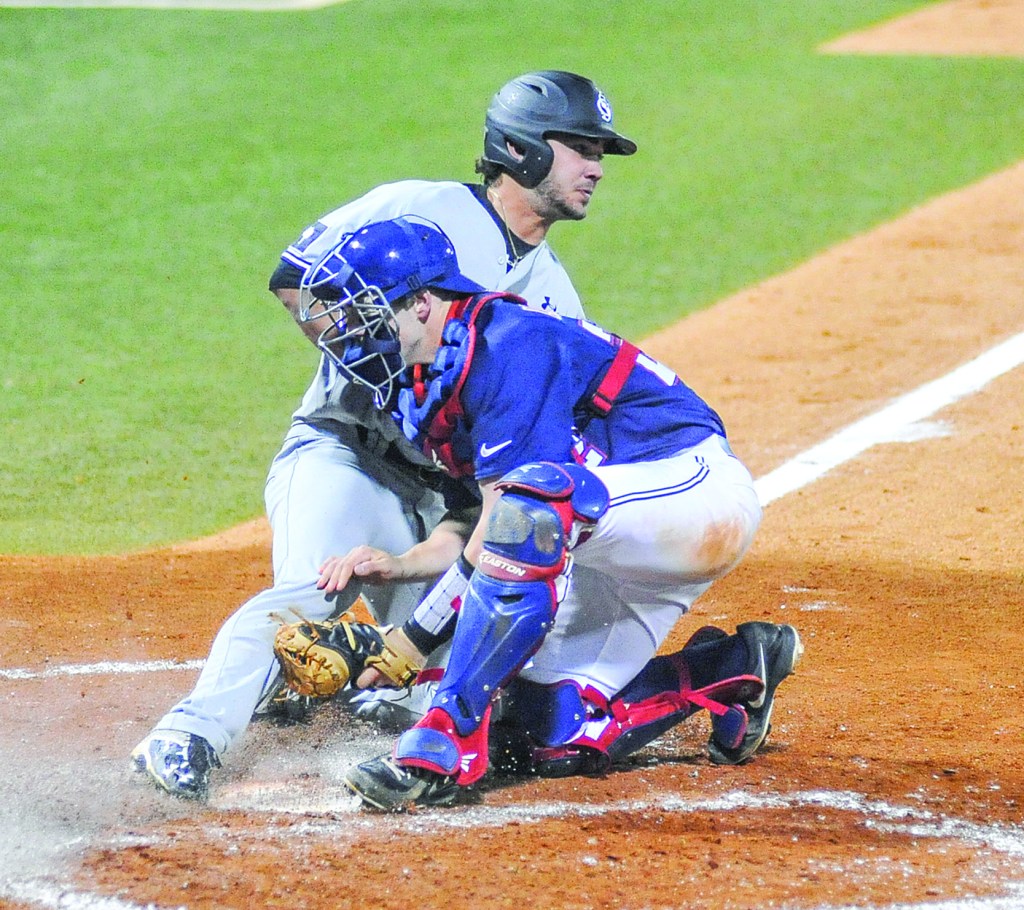 Brady Bramlett was not his best and the offense was not able to get the timely hits as No. 7 Ole Miss dropped its Southeastern Conference home opener, 5-1, to South Carolina on Thursday night at Oxford-University Stadium.

Coming off a physical outing against Tennessee last Friday, Bramlett had one of his worst performances of the season against the Gamecocks (21-2, 4-0). After getting ahead with an 0-2 count to leadoff hitter Gene Cone, Bramlett tossed eight straight balls, which set the tone for the remainder of his night. The right-hander worked 4.1 innings, giving up four runs and striking out six and walking three.

For the second straight week, Bramlett tossed more than 100 pitches, ending Thursday at 101.

“I didn’t have my best stuff tonight,” Bramlett said. “Credit (South Carolina), they’re a good ball club that comes out swinging. Just one of those nights, but I feel confident that we’ll come back (today) and jump out on them early.”

South Carolina jumped out to a 2-0 lead after the first inning off of back-to-back RBI singles by left fielder Alex Destino and third baseman Jonah Bride. Cone hit a solo shot in the second to make it 3-0.

The Gamecocks added a run in the fifth and in the ninth for the winning margin.

Ole Miss had chances, but the story of the game offensively was the inability to plate runners, stranding 11 and going 1-for-10 with runners in scoring position.

The Rebels finished with 11 hits but only one scored a run, an RBI single from centerfielder J.B. Woodman in the home half of the third to make it a 3-1 deficit at the time.

Catcher Henri Lartigue was the lone bright spot for the Rebels, hitting 4-for-4 while Woodman went 2-for-4.

South Carolina starter Clarke Schmidt earned his sixth win of the season, pitching a nearly flawess outing. The right-hander went 6.2 innings, giving up nine hits and one run while striking out eight.

“One of the big keys of winning the game is the timely hit, and we weren’t able to do that tonight,” Lartigue said. “(Schmidt) didn’t walk a guy, and when no free baserunners are out there and you’ve got to earn every bit, it can be tough at times.”

David Parkinson worked 4.1 innings of relief, giving up one run and striking out four. The sophomore provided key innings to keep the Rebels in the game and South Carolina off the board during the middle stages of the game.

Dallas Woolfolk worked the last out of the game.

“We go to David and the game still intact at 4-1 and really gave us an opportunity,” Ole Miss coach Mike Bianco said. “He really made it a ballgame. We could have let it blow up on us, but he really held them in there. We had a couple other opportunities but again, the answer was the big hit.”

The Rebels will attempt to level the series at a game apiece tonight at 6:30 p.m. with Chad Smith taking the mound.