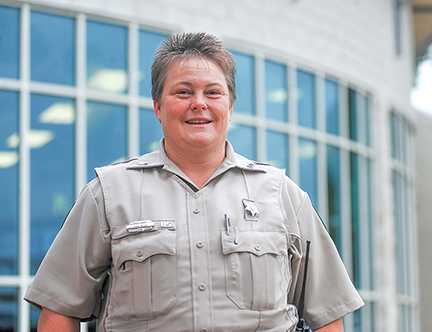 Lafayette County deputy LynnWebb, at Lafayette Upper Elementary in Oxford, Miss. on Thursday, August 6, 2015, recently won an award for her work with the DARE program.

Lynn Webb always knew she wanted to be in law enforcement and wasted no time getting her career started.

She was born and raised here in Lafayette County. She’s married to Paul Webb, who retired in 2003 from the sheriff’s department as chief deputy.

While she enjoyed her days as a patrol officer, helping the students to make the right decisions and keeping them safe provides a whole other level of pride in her work.

“I’ve always considered myself as a proactive person,” she said. “I enjoy working with students. Being an SRO, I’m able to teach students how to be proactive themselves through prevention, such as the D.A.R.E, bullying and safety programs.”

Her day starts at 7 a.m., working traffic, student drop-off or monitoring halls at the Lafayette Upper Elementary School. She speaks with administration and checks to see if anything may have happened with a student overnight such as a house fire, custody issues or a death in a family.

“I work with the attendance officer when there is a concern about why a student is not coming to school and on some occasions, those issues require home visits, which I help with.”

Webb believes SROs are an important part of a school district in today’s world and welcomes the opportunity to protect the children at LUES.

“I want the school to be a safe haven for the students,” she said. “I want the students to concentrate on learning. As an SRO, we have many roles. We try to ensure traffic goes as smoothly as possible in the morning and the evening. We monitor ingress and egress of the traffic throughout the day to keep persons off campus who may not belong. We are another set of eyes for the administration, maintenance and ground crews.”

While Webb is a deputy sheriff, enforcing the law is not the only part of her job. Sometimes, she’s just someone a student feels safe enough with to talk about their problems. At times, she has to play referee between a child and his or her parents. Often, she is the first one to learn about the troubles a child may be dealing with, even away from school.

“Sometimes I see students coming to school hungry, sleepy and may even have dirty clothes on,” she said. “I know they don’t choose to come to school that way, but their home life has created that for them, and our mission is to help.”

And there are those times when she has to lay down the law, so to speak, to unruly students.

“I try to build those relationships to encourage and motivate them,” she said. “I try to make school and life outside of school relevant, to steer them in the right direction. Often, our students don’t understand the choices of friends and attitudes they have now can color their future in the next few years.”

In August 2017, Webb is set to retire, having 25 years of law enforcement under her belt. She plans on fishing and hunting more and working on promoting her own company she recently started, Eagle Eye Personal Defense Firearms Training, where she works primarily with women and teaches them the proper way to use a firearm for protection or hunting. She also helps them become certified for a enhanced conceal carry permit.

“I hope when I retire, I can look back and say I did a good job and be really proud of the work I did here,” she said.