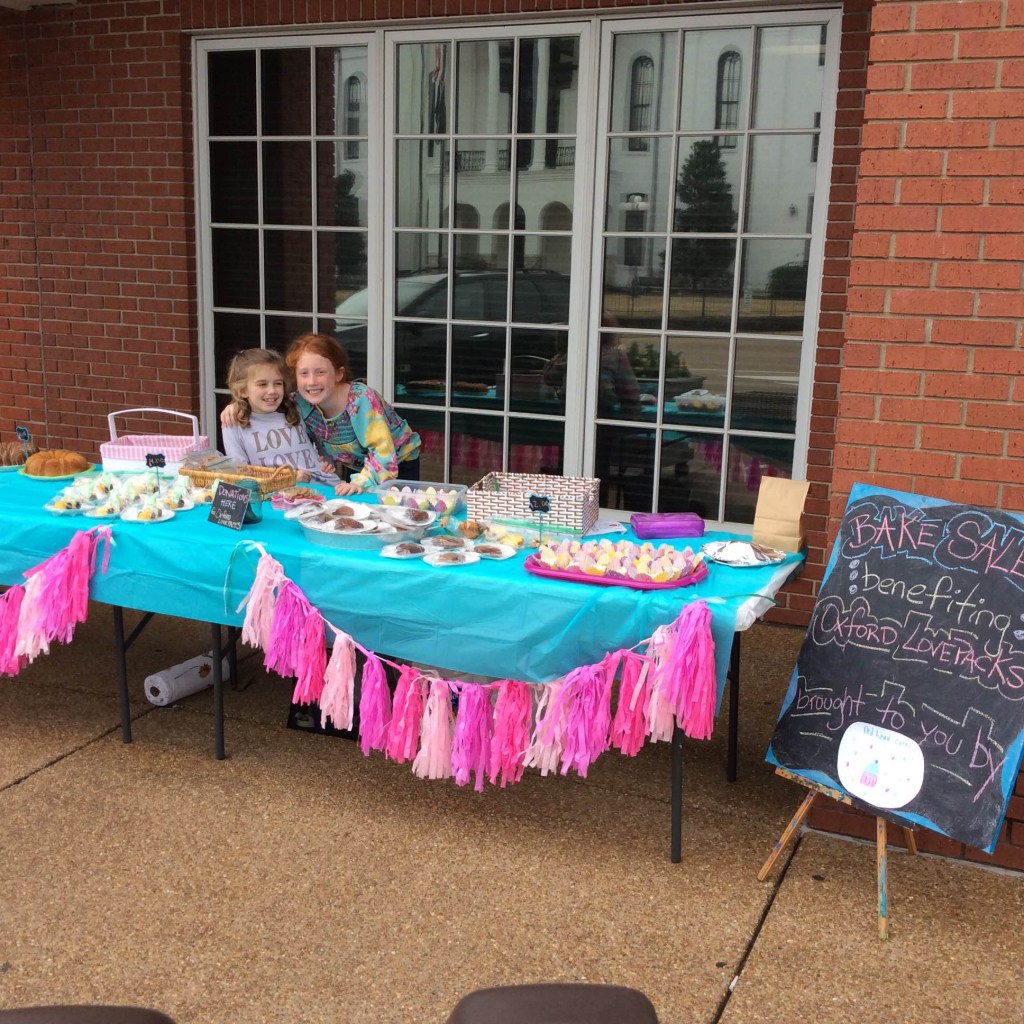 Elise James Bridgers, right, and friend Carter Wilkes work at a bake sale March 12 in front of FNB Bank on the Square. Bridgers was recently recognized by the Oxford Board of Aldermen for setting up the bake sale to benefit Lovepacks, which provides food for elementary school students.

Elsie James Bridgers hasn’t wanted for much in her eight years of life. She lives in a nice home and has all the food she could eat.

However, recently she started to notice some children in her class at Della Davison Elementary School aren’t as fortunate.

Some would get a backpack each Friday, filled with food for the child to eat during the weekend. Obviously, some of those classmates didn’t have enough food at home.

The backpacks are provided by Oxford Lovepacks. Students, who may have a problem eating enough food on the weekends, get a backpack each Friday, filled with ready-to-eat snacks. Some of the food may require using a microwave.

“I go to school with a bunch of kids who need food and I feel sorry for them,” Elsie said Thursday.

Elsie also loves to cook. She decided to use her love for cooking, and in particular baking, to help her fellow students.

“She said it was a good way to support Lovepacks by making food that will give food to others,” she said.

Elsie took off with the idea and started to contact family members and friends to ask them to bake goods she could sell. Elsie also baked two cakes and 36 cupcakes.

The bake sale was held on March 12 in front of the First National Bank on the Square.

Prior to the sale, Elsie asked Mayor Pat Patterson for permission to set up in front of City Hall.

“I felt terrible but I had to tell her no, because our ordinances don’t allow it,” Patterson said.

He suggested contacting FNB, who gave the spunky redhead permission to hold the sale on their sidewalk.

She raised about $300 for Lovepacks.

Patterson stopped by the sale and purchased some cookies. He praised Elsie for her efforts and invited her to come to the March 15 aldermen meeting.

“I know when I was 8 years old I wasn’t doing anything like this,” he said. “The future in this community looks bright with people like you here.”

The entire board thanked Elsie for her community service. She admits, she was nervous standing in front of the aldermen and about 50 people in the audience.

“I wasn’t up there as long as I thought I’d be,” Elsie said. “I was really, really nervous.”