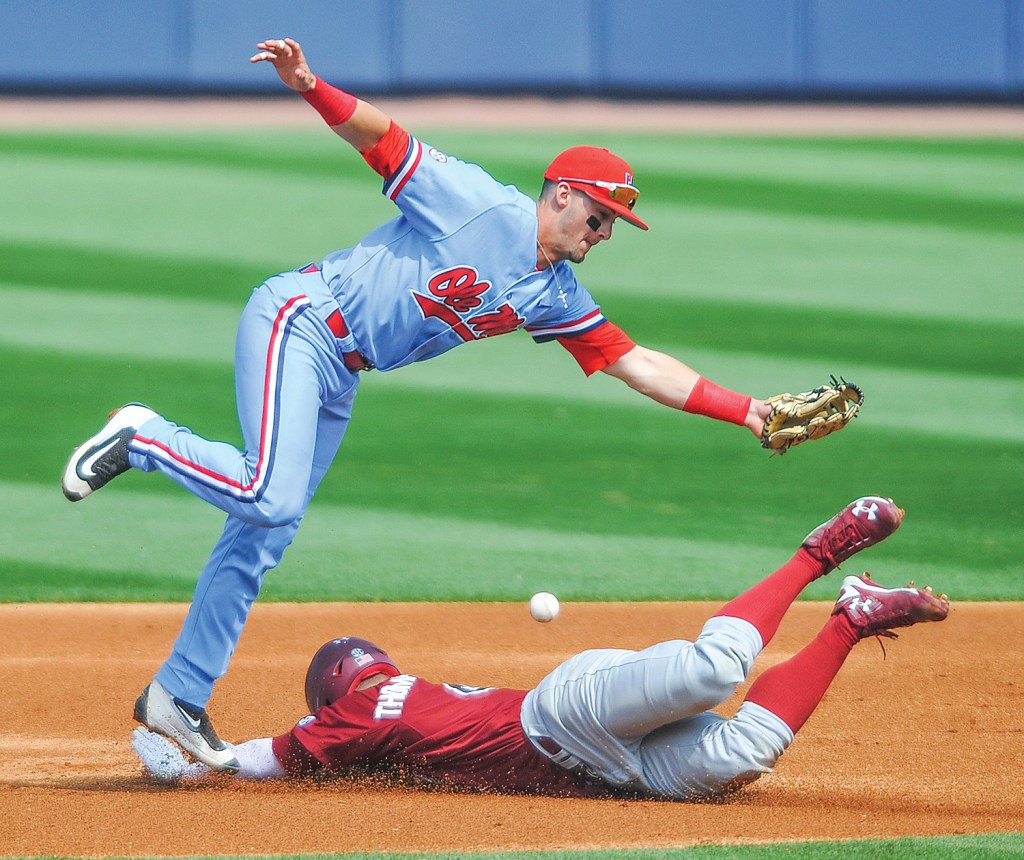 A weekend that started with a lot of excitement ended with a thud as the Ole Miss baseball team dropped the series finale, 4-0, to No. 18 South Carolina on Saturday at Oxford-University Stadium.

The No. 7 Rebels (20-5, 2-4 Southeastern Conference) were swept by a SEC team at home for the first time since a weekend series against Vanderbilt in April 2013.

South Carolina (23-2, 6-0) once again jumped out to a quick lead, scoring three runs on four hits against freshman Andy Pagnozzi, who was making his first weekend start of his career in place of Sean Johnson.

It was not the outing Pagnozzi had in mind as the right-hander went 3.1 innings, giving up the three runs, two earned, off six hits. He failed to record a strikeout and issued zero walks. He found out Tuesday he would get the start in place of Johnson.

“I was ready to come out here and see what I have, and it didn’t go quite how we wanted,” Pagnozzi said. “Just not making pitches. I was really leaving things over the plate. I just didn’t have all my stuff today and my location, and (South Carolina) could hit.”

Johnson did not even dress out for the weekend as head coach Mike Bianco noted it was due to letting him get some much-needed rest after coming back from Tommy John surgery so quickly.

“The thing was to give Sean a break,” Bianco said. “He’s pitched well and competed so, so well for us but really his stuff has deteriorated. His velocity’s gone down, his command’s gone down, his strike percentage has gone down. We’ve asked a lot from a kid that’s just a little over a year out of surgery. He didn’t want to do it, but he understood.”

In an interesting move, closer Wyatt Short entered the game in the fourth inning but provided stability, pitching 5.2 innings of relief and giving up only one unearned run and one hit. It was his longest outing of the season.

With his performance, it adds another candidate to what has suddenly become a question mark with the third spot of the weekend rotation.

“I felt good the whole time,” Short said. “Coach B(ianco) told me before the game even started, he was like ‘Don’t be surprised if we call you in the third, fourth or fifth. It doesn’t matter, we’re going to you.’ …I’m here for whatever the team needs me to do.”

It was another lackluster day at the plate for the Rebels, who recorded five hits against Gamecock starter Adam Hill and reliever Brandon Murray. Ole Miss found itself on base with a combined five walks by the South Carolina pitching staff along with the hits but could not get any runner home, hitting into three double plays.

The most damaging one came in the seventh inning after the Rebels got two runners on with no outs, but Colby Bortles hit into a double play and they could not bring Errol Robinson home following.

“The truth of the matter is we just were not very good this weekend in all phases,” Bianco said. “We didn’t field it very well and put more strain on the pitchers. We didn’t hit and so everybody’s to blame, including the coaches. … Obviously there’s some things defensively we can fix up, but we got to get back to just playing good baseball.”

Ole Miss hits the road for a four-game stint this week starting Wednesday with a game against Memphis at Autozone Park then a weekend series against No. 10 Mississippi State in Starkville.