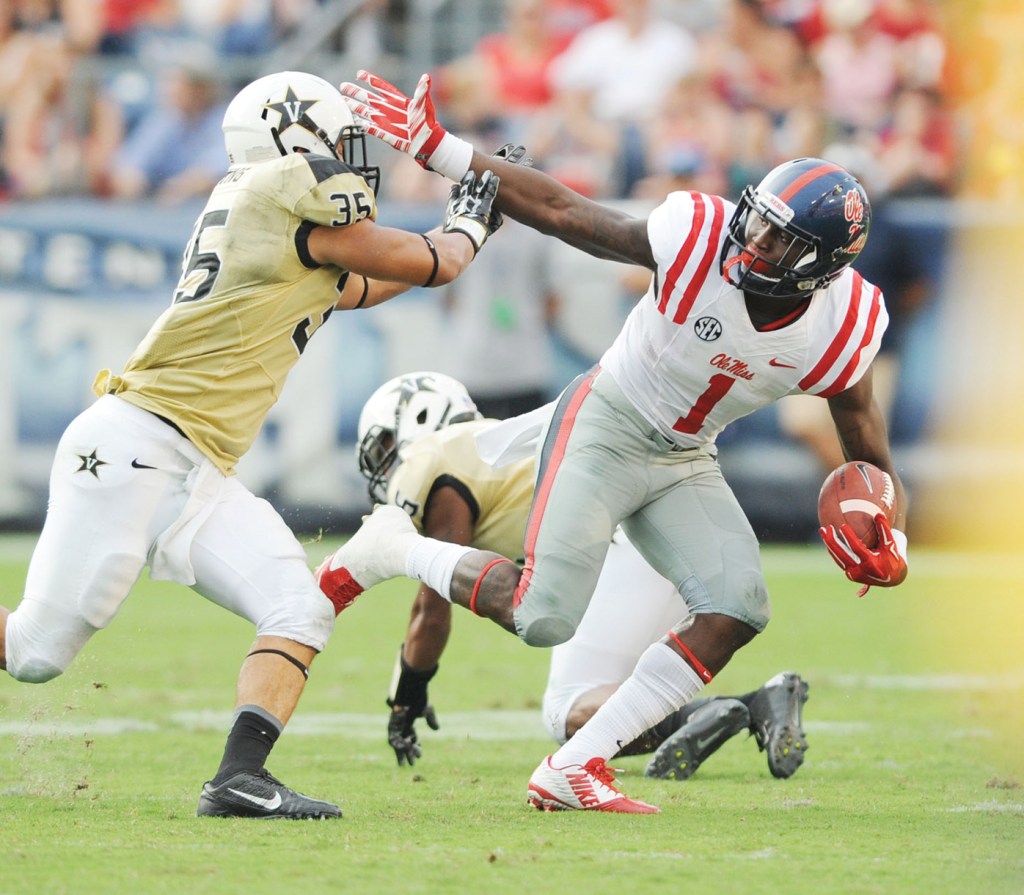 Wide receiver Laquon Treadwell (1) is one of many former Ole Miss players who will work out in front of NFL personnel during the school's Pro Day on Monday. (Bruce Newman)

There will be an extra buzz around the Manning Center on the Ole Miss campus Monday.

National Football League scouts, coaches and front-office personnel will be in Oxford by the dozens to check out some of the league’s top prospects at Ole Miss Pro Day. The event is closed to the public.

A total of 18 recent members of the Rebel football program will work out in front of NFL personnel, highlighted by potential first-round draft picks Laremy Tunsil, Laquon Treadwell and Robert Nkemdiche.

For the first time in school history, the event will be televised live by two different networks — the SEC Network and NFL Network. Coverage on both networks begins at 10:30 a.m. The SEC Network crew will include on-site reporter Matt Stinchcomb, as well as studio host Tom Hart and studio analysts Greg McElroy and Kevin Weidl. The NFL Network’s coverage will feature on-site reporter Mike Mayock.

Tunsil is widely considered the top candidate for the Tennessee Titans to select No. 1 overall in the April 28 NFL Draft in Chicago. As a three-year starter at left tackle for Ole Miss, Tunsil was personally responsible for allowing two sacks during his entire college career. The Lake City, Florida, native was a two-time All-American and three-time All-SEC honoree while helping the Rebels to a slew of offensive team records in both 2013 and 2015.

Treadwell, projected by most analysts to go among the first 20 picks in the draft, is the all-time leading pass catcher in Ole Miss history. In just three seasons, the Crete, Illinois, native set the school record with 202 career receptions (seventh-most in SEC history). His phenomenal junior campaign included the most catches in a season (82), most yards in a season (1,153), most touchdown catches in a season (11) and most 100-yard receiving games in a season (6). He was the first Rebel to ever be named a finalist for the Biletnikoff Award and earned All-America and All-SEC accolades in 2015. He broke onto the scene in 2013 as the SEC Freshman of the Year after compiling 72 catches in his rookie season.

Nkemdiche is a potential first-round pick after dominating the defensive line of scrimmage during his three seasons in Oxford. A two-time All-America and two-time All-SEC defensive tackle from Loganville, Georgia, he compiled 98 career tackles with 19 for loss and seven sacks. He was a finalist for the 2015 Paul Hornung Award (nation’s most versatile player) due to his additional contributions on offense (three offensive touchdowns) and special teams (punt protector).

The last time Ole Miss had multiple first-round NFL Draft selections was 2009, when Michael Oher went 23rd overall to the Baltimore Ravens and Peria Jerry was picked 24th overall by the Atlanta Falcons.